Eni to Increase Investments in Egypt 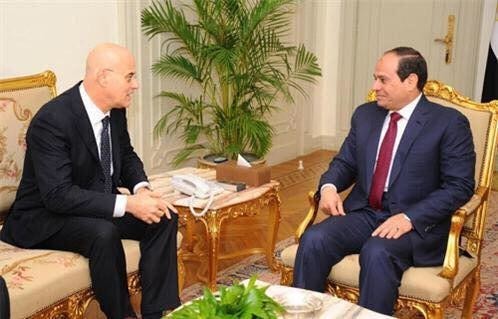 President Abdel Fatah al-Sisi met Saturday with Chief Executive Officer of Italian oil producer Eni, Claudio Descalzi, who announced that his company intends to increase its investments in Egypt in the coming period.

Minister of Petroleum Sherif Ismail along with the Italian Ambassador in Cairo Maurizio Mitsara attended the meeting, according to a presidential statement.

Eni’s Descalzi initiated his speech by offering sincere condolences to the President for the mass beheading of kidnapped Egyptian Copts in Libya last week. He expressed his concern about the outbreak of “terrorist groups, posing a threat to the Middle East region,” the statement read.

“Eni plans to increase its investments in Egypt in the next phase,” said Descalzi, adding: “The company believes in the promising opportunities in the Egyptian economy.”

Sisi welcomed Eni’s top official and praised historical cooperation ties between the two countries and Eni’s operations in Egypt which started in the fifties of past century.

The president also commended Eni’s achievements in the Egyptian market as the company along with its subsidiaries provides roughly 28% of Egypt’s oil and natural gas production.

During the meeting, Sisi stressed growing demands of the local market for energy, and welcomed the Italian company’s plans to increase its investments in Egypt.

Half the projects Egypt will offer at the economic development conference scheduled in March will be in the energy sector, Minister of International Cooperation Naglaa el-Ahwany told Reuters Tuesday.

Egypt’s government has been working hard to tackle the energy crisis it has faced for the past few years. Caused by fuel shortages at power plants and increasing demand, rolling power cuts in the summer have become a daily routine since the January 25 Revolution in 2011.

Further, Sisi reviewed the government’s efforts to improve the investment climate in Egypt, through drafting a unified investment law, and offering a “one stop shop” system to ease procedures for investors, the statement said.

These legislative reforms are to be announced during the economic conference, said the president. He noted that the Egyptian government has already paid back part of the debt and arrears owed to foreign oil companies operating in Egypt, and it will continue to pay off the remainder of the dues.