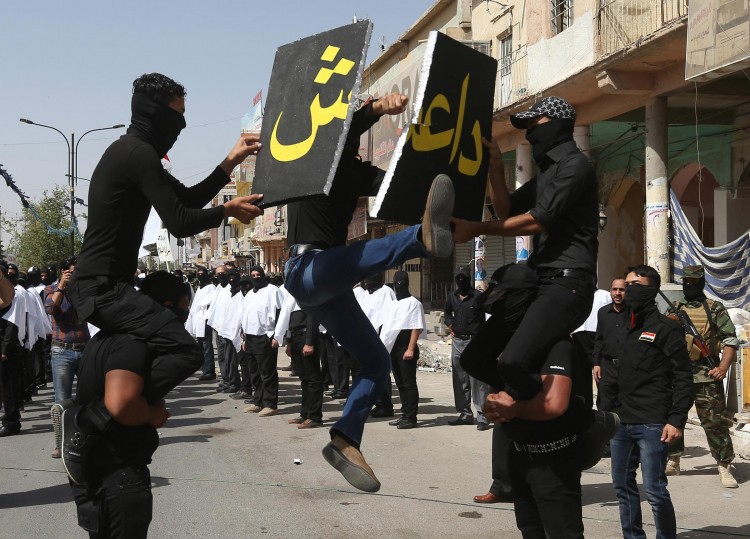 A proposed U.N. resolution to crack down on the financing of terrorist groups calls for sanctions on individuals and companies trading oil produced by the Islamic State and other al-Qaida-linked groups.

The Russian-sponsored resolution, obtained Friday by The Associated Press, would also require all 193 U.N. member states to take “appropriate steps” to prevent the trade in antiquities and other items of historical, cultural, rare scientific and religious importance illegally removed from Syria. A similar ban already exists for antiquities from Iraq.

The draft resolution would also reaffirm that it is illegal to pay ransom to individuals and groups that are already subject to U.N. sanctions, and that all countries are required to freeze such funds.

If adopted, the proposed measure would be another in a series of Security Council resolutions targeting terror that go back to the days immediately after the September 11, 2001 attacks. The earliest resolution bans all countries from supporting or financing terrorism. Subsequent measures have ordered sanctions against terrorists and terrorist groups, demanded an end to ransom payments to such groups, and required nations to bar their citizens from traveling abroad to join terrorist organizations.

The draft resolution was initially debated by the five veto-wielding council members — the U.S., Russia, China, Britain and France. It was circulated to the 10 elected members Wednesday night, and the full council discussed it for the first time at a closed council meeting later Friday.

Russia’s U.N. Ambassador Vitaly Churkin said the reaction was “very positive” and he hopes for a vote on Tuesday.

In November, a U.N. panel of experts monitoring al-Qaida sanctions said the Islamic State group, which controls about a third of Syria and Iraq, received $35 million to $45 million in ransom payments over the past year — and that kidnapping for ransom continues to grow.

Many governments do pay ransom, but the U.S., Britain, Japan and others have refused, leading to the deaths of their hostages.

The draft resolution expresses the Security Council’s “determination to prevent kidnapping and hostage-taking committed by terrorist groups and to secure the safe release of hostages without ransom payments or political concessions.” This is similar to the language in a January 2014 resolution adopted by the council.

The draft resolution reiterates concern that oilfields, refineries and other infrastructure such as dams and power plants controlled by the Islamic State, al-Nusra and other al-Qaida-linked groups “are generating a significant portion of the groups’ income, alongside extortion, private foreign donations, kidnap ransoms and stolen money from the territory they control.”

The proposed resolution is drafted under Chapter VII of the U.N. Charter, which deals with threats to peace because it imposes legally binding obligations on U.N. member states. It does not authorize military action to enforce the resolution’s provisions.

U.S. Undersecretary of State For Terrorism and Financial Intelligence David Cohen said in a speech on October 23 that the Islamic State group was selling oil at substantially discounted prices to a variety of middlemen, including some from Turkey, who then transported it to be resold. He said it also appears that some oil was sold to Kurds in Iraq and then resold in Turkey, and that some was bought by the Syrian government.

In November, a U.N. panel of experts monitoring al-Qaida sanctions recommended that the Security Council authorize the seizure of tanker trucks carrying oil from areas in Syria and Iraq controlled by the Islamic State group or al-Nusra. That is not in the Russian draft, which expresses concern that aircraft, cars and trucks could be used to transfer oil, cash and other valuable items from these areas in violation of the asset freeze and arms embargo on terrorist groups.

The panel of experts also recommended that the Security Council order all countries to deny aircraft permission to land or take off if they are coming from or going to territory held by the two terrorist groups. That recommendation was also not included in the draft resolution.