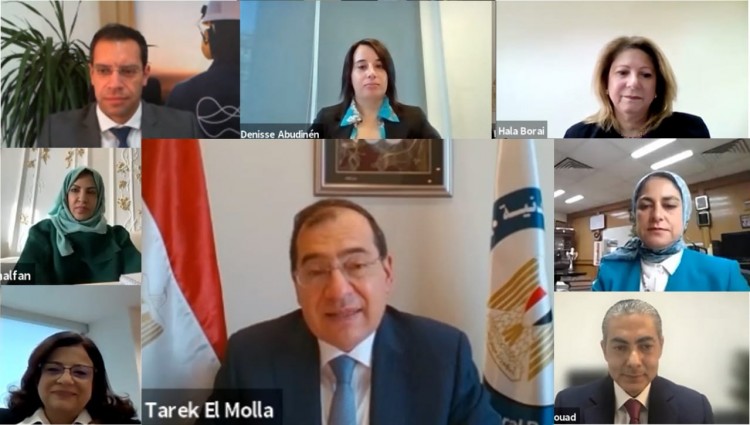 In celebration of Women’s History Month and in recognition of the remarkable milestones women have reached in the oil and gas industry, Egypt Oil & Gas (EOG) Committee hosted its first female empowerment webinar  entitled ‘She is Energy’ on Tuesday, March 30. The webinar was organized by EOG Newspaper, supported by the Ministry of Petroleum and Mineral Resources, and sponsored by Enap.

The webinar examined the government’s role in promoting gender diversity and create inclusive opportunities for women in top management positions so that it can reflect positively on Egypt’s oil and gas industry. As the minister noted during the event that women represent half of the population, so it is essential to hone their skills and not waste their potentials. He further added that empowering women is an imperative element of Egypt Vision 2030 noting that improving women’s rights is one of the foundations for achieving sustainable development.

Fouad emphasized EOG’s keenness to organize such an event, highlighting the role of women in the oil and gas sector as well as their achievements especially in light of the ministry’s Modernization Project.

According to the petroleum minister, women’s representation grew within the Modernization Project recording 40% visibility across the various programs. The ministry, in cooperation with the National Council for Women (NCW), established a communication unit to achieve equality and provide the necessary mechanisms and policies to guarantee economic rights.

El Molla also remarked that Egypt has come a long way in achieving equality, denoting that 25% of the Cabinet are women. For the oil and gas sector in particular. “Women currently represent around 30% of the total employees in the EGPC and holding companies, out of which 33% in leading positions.”

While women’s contribution to the sector is on the rise, there is still room for improvement. “The oil & gas industry still has to do more efforts to encourage more females to join and to make it easier for joining females to progress a successful career,” Sabry  said.

Addressing women in the industry, Abudinén gave an important note saying: “To all women and young females out there; you can reach for the top, your hard work pays off, you will be judged on your ideas, your dedication, and your talent, not for your chromosomes.”

For her part, Shelbaya expressed the necessity of materializing women’s inclusion into real-life. “I fully believe in the female potential and what she brings to the world around her. Thus it is critical to make females feel heard, highlight their talents, acknowledge their efforts, and celebrate their wins, of every size.” Furthermore, ElGabry stated during the event;” I do strongly believe that success is measured by the positive impact we can have on the people around us every day and how we can help them grow, develop, and get empowered.”

Reflecting on Dragon Oil’s strategies to narrowing the gap within the company, Khalafan stated that “We [Dragon Oil] organize summer training for females to encourage them and network them to participate in developing programs.” Likewise,  Borai noted that “GASCO has a commitment to build a pipeline of women to access key positions and encourage them for leadership positions by strengthening their skills especially decision-making skills and risk management.”