The Egyptian cabinet has issued a license to amend the exploration and production (E&P) agreement for the Ras Qattara Concession, Egypt Oil & Gas reports.

The amendment, issued under the terms of Law number 4 for year 1989 and amended as per Law number 7 of year 1994, allows the Egyptian Minister of Petroleum and Mineral Resources, Tarek El Molla, to contract with the Egyptian General Petroleum Corporation (EGPC), the International Egyptian Oil Company (IEOC) B.V, and INA-Industrija nafte D.D.

The cabinet also approved legislation to allow El Molla to contract with EGPC, Cheiron-Zaafarana Petroleum Company, Oceaneer Zaafarana, and Sahary for Oil and Gas to amend the E&P agreement for the North Zaafarana’s Gulf of Suez concession development.

El Molla was further authorized to contract with EGPC for the E&P and development of oil in Bakr and Kareem Concession in the Eastern Desert as well as the Sidr, Asil and Matarama Concessions in the Sinai Peninsula.

The licenses were granted during a cabinet meeting held on March 31st, 2018. 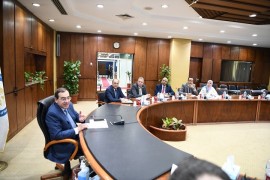