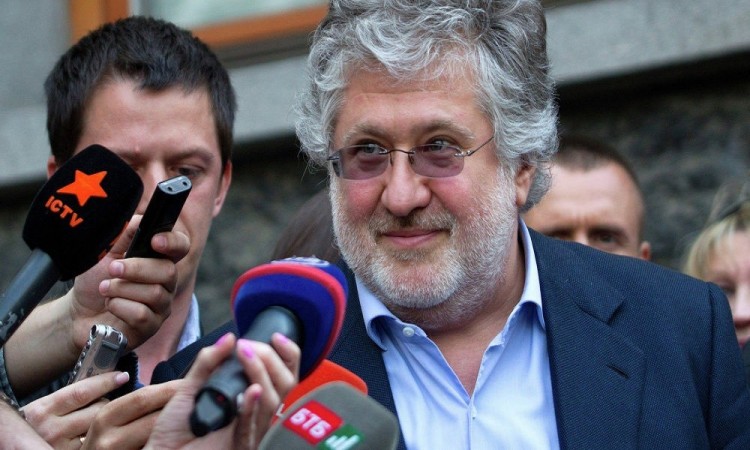 Ukraine’s president fired powerful tycoon Ihor Kolomoisky as a regional governor on Wednesday in a risky move that could affect the internal balance of power and Kiev’s fight against Moscow-backed separatists.

The 52-year-old Kolomoisky has been at the centre of a political storm since armed and masked men, apparently loyal to him, briefly entered the offices of the state-owned oil monopoly UkrTransNafta in the capital Kiev last Thursday night after its director, his ally, was summarily replaced.

As governor of the eastern industrial region Dnipropetrovsk region, Kolomoisky, a banking, energy and media tycoon with a fortune that Forbes put at $1.8 billion last year, has been a valuable ally to the Kiev government in arming and financing militia groups and volunteer battalions there to hold off pro-Russian separatists.

Commentators said dismissing Kolomoisky was a tough decision for Poroshenko who was under pressure from radical deputies to curb what they said was a dangerous power play in Ukraine’s capital city still gripped by political tension as an uneasy ceasefire holds in the east.

Russian officials have increasingly portrayed Poroshenko as weak and suggested he faces a major challenge trying to rein in the oligarchs, as well as what it calls the “party of war”.

A statement on Poroshenko’s website said the President had dismissed the hard-nosed, tough-talking mogul during a meeting on Tuesday after the oligarch had offered to step down.

Kolomoisky is, alone among the so-called oligarchs, credited with taking firm action against separatism in the east – successfully snuffing out rebel attempts to seize control of Dnipropetrovsk last year. As such, he has been a pivotal figure.

There was no immediate word from Kolomoisky’s camp on what his next step would be and whether his sacking as governor would affect his support for volunteer battalions that have fought alongside regular army in the east. The situation remains volatile with key cities such as Mariupol seen as under threat.

Some say Poroshenko may have been motivated reluctantly to take a tough line with Kolomoisky to demonstrate to the International Monetary Fund and other of Ukraine’s Western creditors that he was determined to clean up the chaotic loss-making state energy sector.

In a separate move partly intended to impress Ukraine’s creditors, two high-ranking state officials were detained in a glare of publicity at a televised government meeting in Kiev on Wednesday and accused of involvement in high-level corruption.

But by alienating Kolomoisky, a highly influential figure in a sensitive region, Poroshenko has taken a risky step as he seeks to win back the diplomatic initiative in the crisis with Russia over the separatist conflict, commentators said.

Some commentators suggest it could mark the start of an internal power struggle between Poroshenko and the powerful tycoon who has emerged from political upheaval and war in Ukraine to be the most dominant of the big business oligarchs controlling key parts of the economy.

In what most commentators took to be an indication of growing alarm over Kolomoisky’s funding of volunteer armed battalions, Poroshenko said on Monday he would not allow governors to run their own “pocket armies”.

“Sacking Kolomoisky was the most difficult, but the truest, decision that Poroshenko has made in staffing policy,” said Serhiy Leshchenko, one of those deputies who had pressed for the President to take action against the recalcitrant oligarch.

And though Kolomoisky was not Poroshenko’s principal backer in his campaign for president last May, he is known to have the allegiance of about 15 deputies in Poroshenko’s political bloc in parliament, Ukrainian media say.

Significantly, Poroshenko went out of his way to give an assurance that the region would continue to be well defended from encroachment by rebels who have taken control of large swathes of territory in the two neighbouring regions of Donetsk and Luhansk.

“We must guarantee peace, stability and calm. The Dnipropetrovsk region must remain a bastion of Ukraine in the east to defend peace and calm for civilians,” he said, according to a comment on his website, after signing the decree on Kolomoisky’s dismissal.

Kolomoisky is one of a handful of so-called oligarchs who emerged in the early years after Ukraine’s independence from the Soviet Union in 1991 to secure control over large sections of the economy, including key areas such as energy, and becoming key political players behind the scenes.

But the conflict in the east, in which 6,000 people have been killed since last April, has altered the dynamics and the balance of forces among the super-rich with the Ukrainian media now talking of a “war of the oligarchs”, commentators say.

Kolomoisky’s star has risen, these commentators say, while the influence, for example, of steel magnate Rinat Akhmetov, Ukraine’s richest man whose fortune is now put at $6.5 billion by Forbes and much of whose business in the east has been hit by war, has faded.

The influence of Dmytro Firtash, the owner of Group DF which has interests in the chemical, gas and banking sectors, has also waned since he was arrested in Vienna a year ago at the FBI’s request on charges of bribery.

Kolomoisky himself is involved in a multibillion-dollar legal battle in the High Court in London which pits him against rival oligarch, Viktor Pinchuk, and relates to ownership of a iron ore mine which was sold off in 2004.

Poroshenko himself built a billion-dollar empire in the confectionery business before becoming president last May after street protests ousted the Moscow-backed Viktor Yanukovich from power, triggering Russia’s annexation of Crimea and the separatist rebellions in the east.

The affair at the Kiev offices of UkrTransNafta on March 19 turned the spotlight again on the role of Ukraine’s big businessmen and the future of their empires as the country grapples with economic crisis and separatist war.

Men, armed and masked, entered the offices late at night after the director, a long-standing ally of Kolomoisky’s was summarily dismissed. The tycoon himself appeared at the scene and angrily cursed and berated journalists.

“I came to free the building from Russian saboteurs,” he could be heard saying on a YouTube video clip in which he swore at reporters.

Kolomoisky, co-founder of the banking chain Privatbank, has interests in energy, media, aviation and metals. He has no direct business connection with UkrTransNafta, which is under full state ownership.

But deputy Leshchenko and other radical deputies accused Kolomoisky of making a crude power play which challenged the state and the President’s legitimacy.

Commentators have suggested that Kolomoisky may have over-reacted after suffering a setback last week when the Ukrainian parliament passed a law reforming Ukraine’s state-owned joint stock companies.

The new law, which lowers the numbers of shareholders required to be present for a vote at a meeting, directly hits the interests of Kolomoisky’s Privat Group, which owns 43 percent of shares in the oil extraction company UkrNafta and until now had been able to block voting.

Poroshenko pointedly signed that new law into effect at the same time as he dismissed Kolomoisky as governor.