Gas Shortage Could Be Next Woe in Greek Crisis 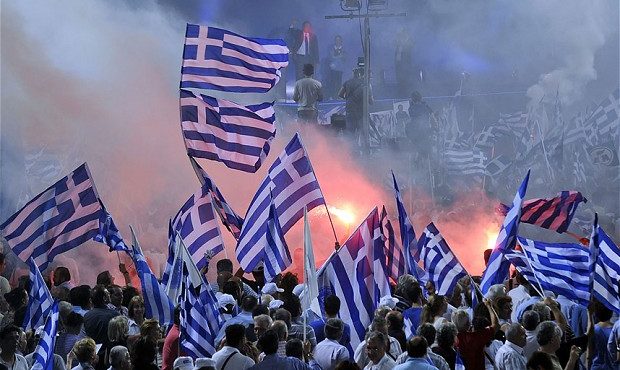 The Greek government’s hunger for cash has stripped the state-run gas company of most of its reserves, raising doubts about how long the country can pay for imports.

The DEPA gas company, along with all other public companies and pension funds, was ordered to place its cash reserves with the country’s central bank in April. Whether the government decides to replenish DEPA’s reserves remains unclear, but the government has already defaulted on a repayment to the International Monetary Fund and is, by all accounts, almost out of money.

As European leaders restart talks Tuesday on a potential third bailout package for Greece, DEPA isn’t sure of what it will do next. If its coffers aren’t replenished soon, DEPA may have to ask its largest gas seller, Russia’s Gazprom, to revisit its terms of delivery.

“Nobody knows at this moment, nobody can give you the answer now,” a source in the company said Monday. “Try to ask next week, because all of us have to see what happens this week. This week is very important.”

Greece imports more than 99 percent of its oil and gas, according to the International Energy Agency (IEA).

That costs billions, although the sum is shrinking because the recession has reduced demand. The country’s net hydrocarbon import bill is forecast to be $6.6 billion this year, when revenue from Greek refinery exports is taken into account, according to BMI Research, owned by Fitch Group.

“It’s not great news: Greece is to a large extent dependent on imports,” said Walter Boltz, vice chair of the board of regulators at the EU’s Agency for Cooperation of Energy Regulators.

“So now, questions might be raised on whether it will have problems financing those imports. Suppliers might under these circumstances ask for guarantees or pre-payments,” Boltz added. “Overall, it’s an uncertain financial situation. Whether it’s for power, gas or oil, you have to ask yourself the question, will I get paid?”

DEPA’s largest supplier by far is Gazprom, which provided nearly 70 percent of Greece’s gas in 2014, or 1.7 billion cubic meters, according to BP statistics. The two recently extended their long-term contract by another 10 years. The remainder of the country’s gas comes by pipeline from Turkey’s BOTAŞ and by cargo as liquefied natural gas to the nation’s Revithoussa terminal, largely from Algeria’s Sonatrach.

Russia also has the biggest share of Greece’s crude oil imports, with 33 percent in 2012, followed by Saudi Arabia, Iraq, Libya and Kazakhstan, according to the IEA.

The uncertainty over whether there will be cash to pay for imports comes as oil and gas demand slumps due to the financial crisis and a recent overhaul to the electricity market, which removed subsidies.

This means Greece is unlikely to face immediate gas shortages, said a diplomatic source in Brussels. “Greece doesn’t use that much gas, so we don’t need to store gas during the summer as we don’t have that much demand in the winter.”

Lower demand may also give Gazprom room to offer its buyer some flexibility, which would in turn give DEPA more time to scrounge up some cash, other sources said. But that would become harder if Greece were to leave the euro. If it brought back the drachma, the new currency would probably significantly devalue, but it would have to continue paying for oil and gas imports in U.S. dollars.

“On top of difficulties stemming from liquidity issues, if Greece were to leave the euro and adopt a new national currency, that could impact its ability to import and use natural gas, among other commodities,” saidAnastasios Giamouridis, a senior consultant at the energy consultancy Pöyry, explaining that it could be too expensive for end-consumers to pay for U.S. dollar-priced imports in drachmas.

“This unfavorable framework could therefore result in a collapse of gas demand, as imported energy becomes too expensive to use by the Greek population, and/or in non-payment issues as end-customers find themselves unable to settle their bills towards Greek importers, which could in turn affect the latter’s ability to pay their foreign suppliers,” Giamouridis added.

Gas tariffs in Greece are already among the highest in the EU. Greek household prices averaged €0.08 per kilowatt hour in the second half of 2014, the eighth highest among the 28 member states, according toEurostat.

This is the result of relatively low consumption as well as the lack of necessary infrastructure, which would allow Greece to diversify its energy routes and resources and foster competition, according to the Greek Energy Forum, an international network of Greek energy professionals.

The EU has been pushing for — and, arguably, struggling with — the liberalization of Greece’s energy market for years. It is a part of implementing the bloc’s third energy package of 2009, which aims to create an internal power and gas market, as well as other EU rules.

“Greece has one of the worst records in the EU; one that has led to substantial penalties and additional costs for the government,” said the Greek Energy Forum.

Reform of the country’s power market has been particularly “thorny,” the network said, adding that resistance to change has been strong for years, particularly from trade unions and state-owned Public Power Corporation (PPC) employees who fear for their jobs.

But there’s hope that outside demands for structural reforms will help open Greece’s energy market. The vast majority of the energy sector provisions included in Greece’s most recent bailout proposal, submitted to creditors a week ago, focus on encouraging competition.

“Current developments will facilitate the liberalization of the energy market,” said Niki Tzavela, a former Greek MEP and member of the European Parliament’s energy and industry committee until 2014, noting that the proposal also calls for the partial privatization of PPC.

In the short term, however, the Greek energy sector and economy will depend on DEPA and other companies being able to pay for their imports, she added.

“It would be a nightmare for the economy and households. The economy would be paralyzed and our everyday lives would be massively affected.”