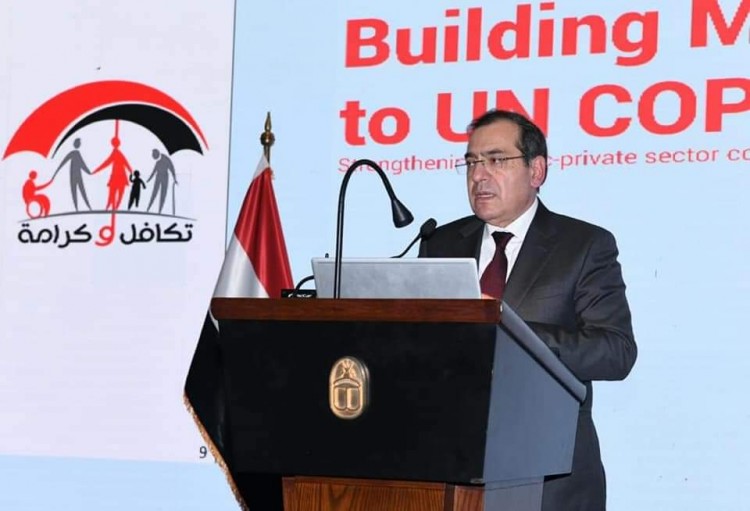 Minister of Petroleum and Mineral Resources Tarek El Molla stated that the oil and gas sector is currently implementing a work program to reduce carbon emissions.

The program includes 6 main pillars to achieve this goal, namely reforming energy subsidies; expanding reliance on natural gas as a clean fuel; raising energy efficiency; reducing carbon emissions and benefiting from them; and using renewable energies in petroleum sites; and the establishment of biofuel projects; as well as the tendency to use hydrogen, emphasizing that cooperation and integration between all concerned parties is the basis and the only way for the success of these efforts.

This came during the minister’s speech before a climate forum organized by the American Chamber of Commerce in Cairo and the Egyptian-American Business Council. It witnessed the virtual participation of Prime Minister Mostafa Madbouly and John Kerry, the US Special Presidential Envoy for Climate, in the presence and participation of a number of government ministers. The US ambassador in Cairo was also present, in addition to a number of heads of international oil companies. The forum was held under the title “Building Momentum towards the COP27 Climate Summit… Strengthening Public-Private Cooperation to Address Climate Challenges”.

During his review of the mechanisms for implementing efforts to reduce emissions, El Molla clarified that the energy subsidy reforms in Egypt allowed more funds to be directed to those who deserve it. This is in line with initiatives aimed at improving citizens’ living standards.

The minister pointed to the continuation of efforts to increase reliance on natural gas as an alternative to some petroleum products. He noted that this clean energy source is widely available, affordable, environmentally responsible, and essential for reducing emissions.

The most important indicators of this trend were the increase in gas’ acquisition of a share of about 65% of the total consumption of fuel today, compared to 48% six years ago, El Molla said. He emphasized that the increasing reliance on natural gas in manufacturing industries can achieve added value.

Egypt’s hosting of the upcoming COP27 climate summit puts great responsibility for the country to reach successful outcomes from the summit in line with The Paris Agreement, El Molla said.