UAE Above Average in the Female Nuclear Specialist Department 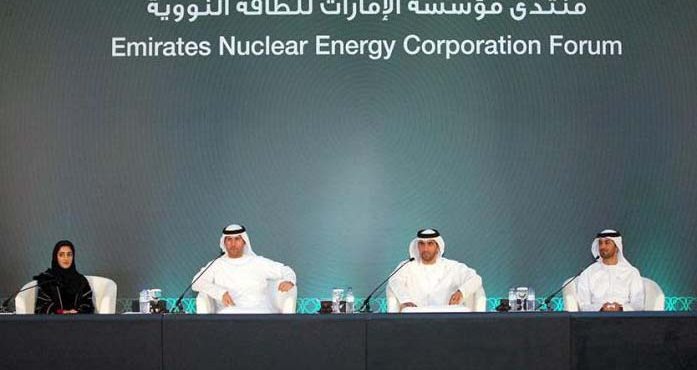 The UAE has more women professionals engaged in the nuclear energy programme than the global average of their counterparts.

“To safely deliver a project of the scale and complexity of the UAE peaceful nuclear energy programme takes a large and diverse team. And I am proud that of our 1,400 employees today, over 21% of these highly skilled professionals are women, more than the global average of just over 20% of females in nuclear professions worldwide,” said Mohammad Al Hammadi, Chief Executive Officer of the Emirates Nuclear Energy Corporation (Enec).

The Enec is responsible for deployment, ownership and operation of peaceful nuclear energy plants, with a mission to deliver electricity to the UAE grid in 2017.

Al Hammadi said Enec also supports an increasing number of women students through its energy pioneers scholarship programme. “These future nuclear energy leaders will oversee safe operations of the country’s first nuclear energy plant when it begins operation in 2017. Currently, over 29% of students in Enec’s educational programmes are women, with that figure increasing to 34% in the Higher Diploma in Nuclear Technology (HDNT) programme.”

His comments came on the occasion of Enec celebrating the first anniversary of the region’s first Women in Nuclear (WiN) Chapter — the global organisation that supports the role of women in the nuclear industry around the world.

Established in 2014, Enec’s WiN Chapter is the first of its kind in the Middle East and is supported by Shaikha Lubna Al Qasimi, Minister of International Cooperation and Development.

“I am extremely proud to be supporting the ENEC WiN Chapter,” Shaikha Lubna said.

“Developing women in such an important industry that will enhance the future social and economic growth of our nation is innovative as well as necessary,” she said.

Huda Al Hashemi, Enec’s Group External Affairs Director, said the talented women professionals are playing an active role in delivering a project that will have a direct and lasting impact on the continued growth and development of the nation.

An official spokesman of Enec told Gulf News on Monday that the corporation has been encouraging Emirati women, especially engineers, to join the industry since Enec was established in 2009. “Our policy is to have Emirati men and women in 60% of the total positions by 2020,” he said.

By 2020, Enec will need approximately 2,000 employees to operate its four nuclear plants at Barakah, in the Western Region of Abu Dhabi. Construction of the UAE’s first nuclear energy plant continues to progress safely and steadily at Barakah, with Unit 1 now over 70% complete and all four units more than 45% complete. By 2020, Enec’s four plants will provide up to a quarter of the UAE’s electricity needs, and save up to 12 million tonnes of carbon emissions annually.