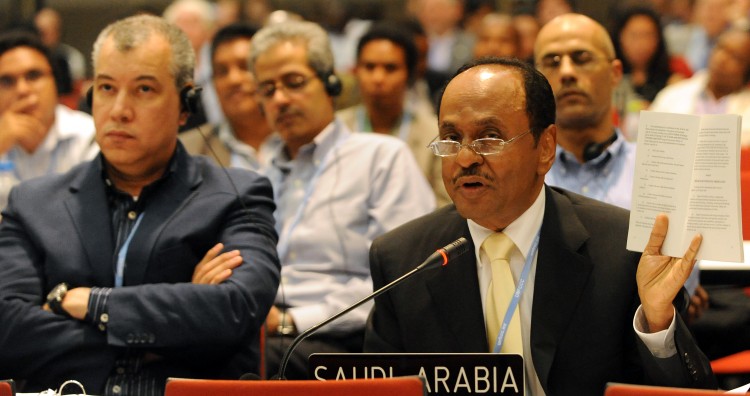 The world’s largest exporter has chosen not to cut production, counting instead on lower prices to stimulate consumption, said Mohammad Al Sabban, an adviser to Saudi Arabia’s petroleum minister from 1988 to 2013. The Saudis are keeping an eye on investments in fuel efficiency and renewable energy, according to Francisco Blanch, Bank of America Corp.’s head of global commodity research. “Nobody should imagine the world will continue to demand oil as long as you have it in your fields,” Al Sabban said in an interview. “We need to prepare ourselves for that stage.”

The U.S. shale revolution showed that forecasts of dwindling world oil supply were premature. It also gave credence to the old adage, attributed to a Saudi oil minister more than 30 years ago, that the Stone Age didn’t end because of the lack of stone. With costs falling for clean energy and international attention focused on slowing climate change, the Saudis are more worried that the world is inching closer to peak demand.

Among industrialized countries, that peak was reached 10 years ago, according to the Paris-based International Energy Agency, and fast-developing countries such as India and China won’t become as carbon-intensive, Al Sabban said. Oil supplied 31% of the world’s energy in 2012, compared with 46% in 1973, the IEA said. Even as oil prices dropped 48% last year, the most since 2008, global production rose 2.1% to 93.3 million b/d, according to the IEA.

The price plunge was caused by years of record-high prices that spurred expanding supplies while impairing demand — and not a Saudi conspiracy, Al Sabban said. Saudi Arabia and other members of the Organization of Petroleum Exporting Countries hope cheap energy will foster economic growth and, in turn, more oil consumption, he said.

While economists say that oil demand doesn’t rise or fall much in response to price fluctuations in the short term, there’s some evidence the bear market is already having OPEC’s intended effect. The cheapest gasoline in five-and-a-half years is encouraging Americans to buy bigger, thirstier cars. The average fuel economy of new vehicles sold in the U.S. fell in December to 25.1 miles per gallon from an August peak of 25.8 mpg, according to the University of Michigan Eco-Driving Index. Periods of lower prices historically lead to stronger demand, Societe Generale SA said in a January 14 report.

Cheaper oil might also lead countries to back off from pledges to cut carbon emissions as they lose revenue from energy taxes, according to Zoe Knight, head of HSBC Holdings Inc.’s climate change center in London. Public funding could dry up for low-carbon energy and efficiency projects, which may prolong the use of fossil fuels, she said in a January 7 report.

Yet the link between economic growth and oil is weakening as countries invest in alternatives. Efficiency investments and policies are reducing the amount of energy needed to produce one unit of gross domestic product, saving a continent’s worth of energy demand as developing countries add to global consumption, the IEA said in October. Consumption will shrink to 45.6 million b/d in 2015, according to the IEA.

“The Saudis are doing this for the long run,” Bank of America’s Blanch said in a January 23 interview on Bloomberg TV. “The Saudis are changing the structure of the market. They’re basically pushing back peak demand by another five to 10 years.”

Saudi Arabia, as a low-cost producer, will be instrumental in meeting that demand, according to Charles Ebinger, a senior fellow in the Energy Security and Climate Initiative at the Brookings Institution in Washington.

“They will be able to sell plenty of oil into that market,” Ebinger said. Ali al-Naimi, Saudi Arabia’s longtime oil minister, is a fixture at global climate-change conferences, including the December summit in Lima. He frequently raises the issue in speeches, advocating for investment in carbon-capture technology that would offset the heat-trapping effect from continuing to burn fossil fuels.

King Salman Bin Abdulaziz Al Saud, Saudi Arabia’s new ruler, will keep Al-Naimi in his post, according to the official press agency.
Investments in clean energy rose 16% to $310 billion in 2014, the first increase in three years, according to Bloomberg New Energy Finance. Solar and wind installations will grow 10% this year, BNEF said in a January 9 report.

The Saudis have pledged to invest $109 billion in renewable power by 2040, the head of the agency in charge said January 19. The project is meant in part to free up more oil for export as the kingdom’s rapidly growing population consumes more energy, according to the U.S. Energy Information Administration. Domestic consumption has
almost doubled since 2000 to 3.1 million b/d in 2013, according to data from BP Plc.

“Using oil to generate electricity makes no sense at all, leaving aside climate issues,” said Jan Kalicki, a former Commerce Department counselor who’s now a senior
scholar at the Wilson Center in Washington. “It shows the Saudis are focused not just as a producer but as a consumer.”