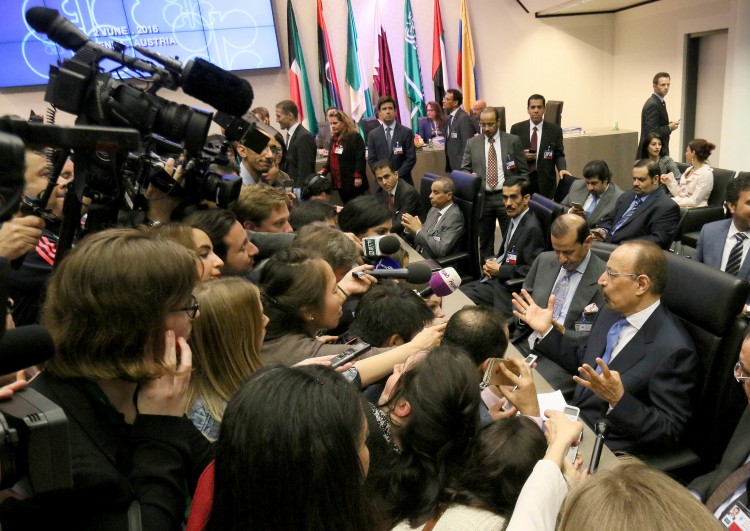 Khalid Al- Falih, right, Minister of Energy. Industry and Mineral Resources of Saudi Arabia speaks to journalists prior to the start of a meeting of the Organization of the Petroleum Exporting Countries, OPEC, at their headquarters in Vienna, Austria, Thursday, June 2, 2016. (AP Photo/Ronald Zak)

The Organization of Petroleum Exporting Countries (OPEC) will stick to its policy of unfettered oil production after members failed to agree on a new output ceiling during a meeting in Vienna, Boston Globe reported. OPEC needs more time to come up with a new output new ceiling, outgoing Secretary-General Abdalla El-Badri said, adding that it’s hard to find a target when Iranian production is rising and significant Libyan volumes are halted.

Saudi Arabia, had previously discussed restoring a production target scrapped in December, according to delegates familiar with the matter.

While Saudi Arabia had shown willingness to mend divisions with cash-strapped members demanding a new group ceiling, Iran said it would only support individual country quotas that would be difficult to agree in a single meeting, Fuelfix wrote. However, Iran has rejected any cap on production as it restores output following the removal of sanctions in January.