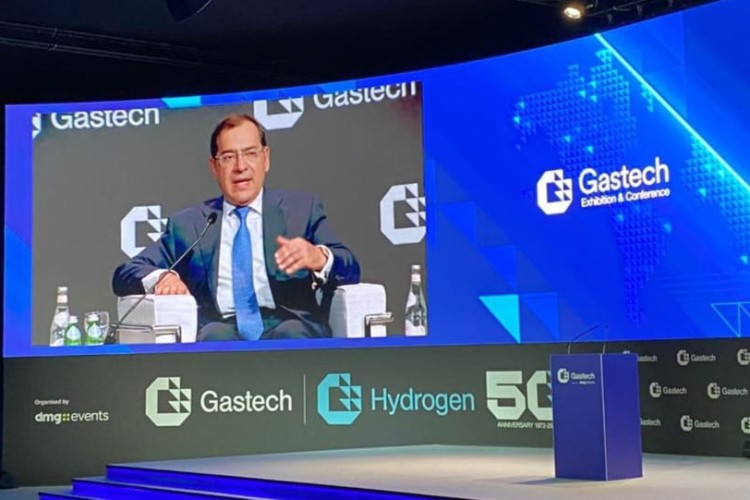 Minister of Petroleum and Mineral Resources Tarek El Molla participated in the opening activities of the Gastech Exhibition and Conference 2022 in Milan, Italy, which is being held from September 5-8, as one of the world’s largest events for natural gas, liquefied natural gas (LNG), hydrogen, and emissions reduction technologies.

During the opening ceremony, El Molla participated as a keynote speaker in the inaugural ministerial session of the conference titled ‘A New Perspective on Energy Security and Transition in Times of Profound Change in Global Energy Markets’, in which India’s Minister of Petroleum and Natural Gas, Shri Hardeep Singh Puri, and Portuguese Minister of Environment and Mineral Resources, João Galamba, also participated. 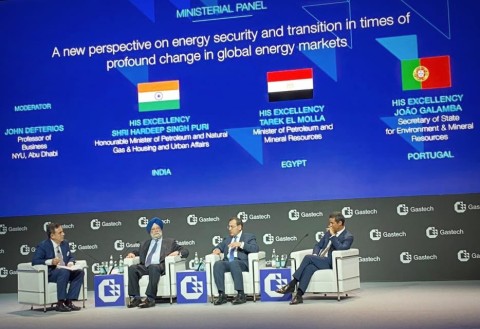 During the session, El Molla stated that the remarkable growth that Egypt achieved in recent years in the natural gas sector contributed to maximizing the use of its distinguished resources and infrastructure in this sector to meet the current global challenges in energy markets. El Molla emphasized that the growing availability of gas resources as well as the completion of the required infrastructure for export enabled Egypt to benefit from the global increase in LNG exports prices in the face of the significant rise in international oil prices, which exceeded $100 per barrel, in light of importing part of the quantities needed to meet the local needs of petroleum products.

El Molla also stressed that Egypt is working to build strong partnerships and constructive regional cooperation in the field of natural gas in order to support Egypt’s role as a center for receiving, transporting, and exporting natural gas supplies from the eastern Mediterranean to the European Union (EU) in order to achieve optimal economic benefit from the infrastructure and facilities available in Egypt. This represents the important solutions available and comparative advantages that can be exploited economically to make available additional quantities of natural gas from the eastern Mediterranean to meet the increasing demand in Europe.

In this context, El Molla pointed out the importance of the tripartite memorandum of understanding (MoU) that was signed in Cairo to cooperate in the transportation of eastern Mediterranean gas through Egypt to the EU, noting that this agreement gives positive messages to international companies and represents a great incentive to accelerate their activities and spend investments on the development and production of gas resources in the Eastern Mediterranean to be available to supply consuming markets as soon as possible.

El Molla said that the eastern Mediterranean region has become a focus of increasing interest from major international energy companies over the past few years, pointing out that the availability of infrastructure and facilities for gas exploitation encourages the rapid exploitation of promising opportunities in the eastern Mediterranean, and that there is a need to expedite the completion of projects to develop the fields discovered in the region, in addition to the ongoing research and exploration projects, due to their importance in meeting the needs of the local markets in the region and exporting to Europe alike.

The Egyptian Minister highlighted the importance of the efforts that the East Mediterranean Gas Forum (EMGF) is working on to achieve coordination and consensus among the governments of the member countries in the forum to work on exploiting gas reserves in the region and decarbonizing gas to secure a low-carbon energy source while supporting the energy transition process.

El Molla further reviewed the energy sector strategy in Egypt, which attached importance to working on improving energy efficiency, in addition to adopting a strategy to expand the production of new and renewable energy, especially from solar and wind sources, to increase electricity generation rates, in order to rationalize the consumption of natural gas and provide additional quantities of gas for export to meet growing global demand.

The minister also highlighted the continued importance of natural gas as a low-carbon primary fuel, not only at the present time, but in the long run, with the need for a consensus to support energy companies to accelerate gas field development programs, stressing that the process of switching to low-carbon energy sources require relying on different solutions such as gas, ammonia, and hydrogen.

Egypt’s participation in Gastech, which celebrates its fiftieth session this year, comes based on its being a pivotal country and a major center for the trade and circulation of natural gas regionally, and its holding comes before its presidency of the World Climate Summit COP27, which it will host on its soil next November. Hence, the conference is an important opportunity for consultation and exchange of views with the most important parties globally in the fields of green energy and natural gas as the main fuel in the energy transition stage, and participating in evaluating the developments of the energy scene globally, as well as directing efforts to lay down a fair and balanced energy transition path.