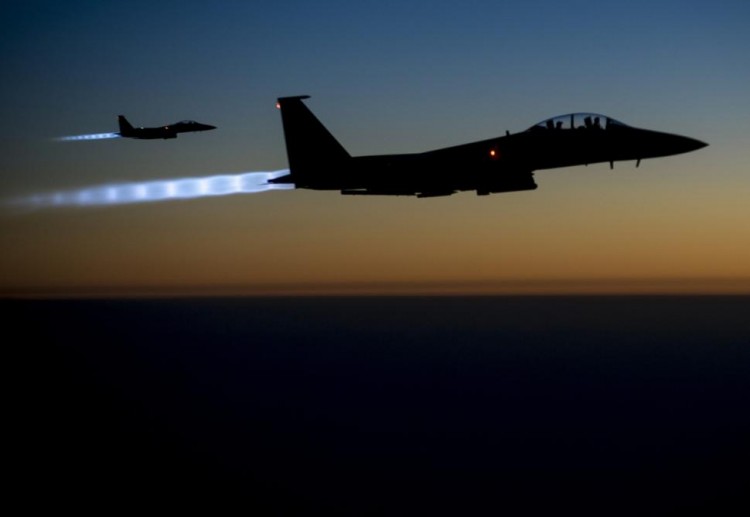 At least 14 people have been killed in US-led coalition air strikes on an oil refinery in northern Syria run by Islamic State (IS), activists say.

Refinery workers and jihadist militants were among those who died in the raid on the facility outside Tal Abyad.

One activist group posted a video purportedly showing a fireball rising into the night sky after the attack.

Captured refineries and oil fields have played a key role in fuelling Islamic State’s advance across Syria and Iraq.

Last year, the group may have earned as much as $100m (£66m) from the sale of oil and oil products to local smugglers who, in turn, sell them to the Syrian government and merchants in neighbouring countries.

However, US officials say the group’s ability to use oil as a source of revenue is now believed to be diminishing due to the air strikes.

The activist group Raqqa is Being Slaughtered Silently said aircraft had targeted a refinery near the village of al-Munbatih, near the Turkish border in Raqqa province, on Sunday night.

Fourteen IS militants were killed in the raid, including three foreign fighters from Saudi Arabia and Egypt, it said. Nine others were seriously wounded and have been taken to a hospital in the city of Raqqa, the de facto capital of the caliphate proclaimed by IS militants last June.

The Syrian Observatory for Human Rights, a UK-based group, reported that about 30 people were killed, including civilians.

A spokesman for the US Combined Joint Task Force overseeing the fight against IS told the Reuters news agency that it had implemented “significant mitigation measures within the targeting process and during the conduct of operations to reduce the potential of civilian casualties”.

“When an allegation of civilian casualties caused by US or coalition forces is determined to be credible, a thorough investigation would be launched to determine the accuracy of the claim and any circumstances surrounding it,” he added.

On Sunday afternoon, the coalition also reportedly conducted air strikes against al-Qaeda’s affiliate in Syria, al-Nusra Front, in the north-western province of Idlib.

The Syrian Observatory reported that an al-Nusra military base in Atmeh, a town near the Turkish border, had been hit, killing nine members of the jihadist group, four of them foreign fighters.

A civilian in Atmeh told the AFP news agency that three buildings had been “completely destroyed”.

Last week, al-Nusra’s top military commander and several other leaders were reported to have been killed in an air strike in Idlib province claimed by the Syrian military, but this has not been confirmed.

In a separate development on Monday, Kurdish Peshmerga forces in Iraq launched a new offensive against IS militants to try to drive them away from positions threatening the city of Kirkuk.

The Peshmerga took control of Kirkuk last summer as the Iraqi army collapsed in the wake of the lightning IS advance.