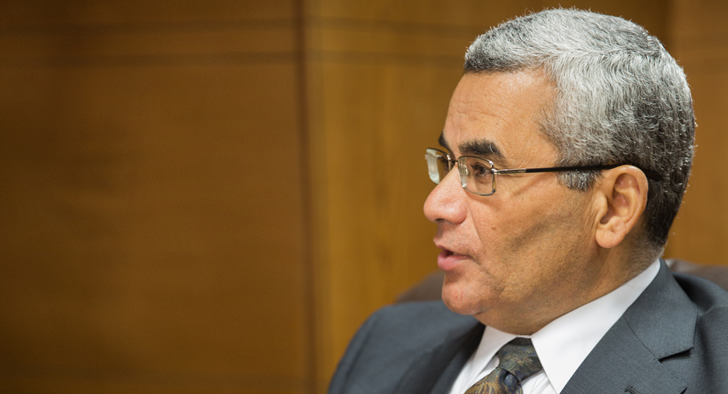 “The Red Sea is a Huge Opportunity. It is a New Frontier.”

Egypt Oil & Gas recently sat down with Abu Bakr, the chairman of Ganoub El-Wadi Holding Company (GANOPE) to ask him about the challenges facing Upper Egypt and the company’s plans to resolve them. As in other interviews, the entirety of this interview is too extensive to print below in detail. However, selected highlights are below.

We started out by asking Bakr about GANOPE’s current bid round, and why it was recently extended until the end of May. “An initial three month bid round was announced on the last day of 2014, but we knew ahead of time that this would likely not be a long enough time window so we put a condition that if someone formally requested an extension we would grant it. Several companies have, so we are extending the deadline to May.”

Abu Bakr explained that the deadline was intentionally set too short to encourage faster investment. “We need to make progress, we need to award blocks.” Bakr went on to say that the economic conference in Sharm El-Sheikh was also a good reason to delay the bid round deadline, as there would be investors there hearing about the blocks for the first time.

“It is mutually beneficial for GANOPE and our partners to extend the deadline,” Bakr finished.

GANOPE was established in 2004 to regulate the production and distribution of all of Egypt south of the 28th parallel. This comprises about 2/3rds of Egypt’s total land area. “It is a huge area, and the challenge is that we do not have enough data for most of it,” Abu Bakr stated.

During all of 2014 the company has been trying to promote and raise awareness of its mandated areas. “We attended conferences in the UK, US, Russia, UAE. We always take every opportunity to promote our areas. We always encourage investors to visit us, to be exposed to the capabilities of our people.”

Abu Bakr might now be the chairman of a large state-run company now, but that was not always the case. He has had a career of working for various companies, private and public, focusing especially on operations. He explains that this experience makes him very receptive to operators’ needs and requests. “I spent most of my career on the operational side. Khalda, Quaran, Bapetco; we know what is valuable and how to manage priorities for operations. We need to change ideas, we need to be more flexible to attract more investors.”

“We are a government regulator, but at the same time, we have experience in operations, in the field.”

The company faces a number of major challenges, but they are not necessarily the same ones that other government run corporations (such as the EGPC or EGAS) face. When asked about how oil prices have affected E&P in Upper Egypt, Bakr was quite optimistic. “This has not really affected us much because our concessions are not that expensive for production. This is certainly an issue in some concessions such as ultra-deep-water, those can be quite expensive; but for our onshore operations costs are not too high. We are lucky, they have not affected us much.”

GANOPE’s chairman responded similarly when asked about another main issue faced by most other groups, government debt owed to foreign firms. “Again, we are lucky, we do not have this problem. Honestly, we have Sherif Ismail to thank for this. He has made a very strong effort to cut this amount in half, from $6.3 billion to $3.1 billion.”

“When GANOPE was established, it inherited a number of wells from EGAS and the EGPC. Since these wells were inherited, all the financial commitments go back to those agencies.” Bakr explained that GANOPE has two companies they set up agreements with themselves, but that the company does not owe these two anything near the large arrears owed to other large firms. “We are in good shape.”

The biggest challenge for GANOPE is its lack of data for the areas under its mandate. “We do not have enough data for most of our areas.” This is due to the massive size of the area and the fact that it has traditionally not been explored in favor of areas such as the Nile Delta. Abu Bakr is especially adamant that there has not been enough exploration in the Red Sea. “The offshore Red Sea is a frontier area. Some limited exploration work has been done, but this was more than 30 years ago. Only 12 wells were ever drilled; far, far too few to understand the oil or gas potential.”

Egypt Oil & Gas specifically asked where GANOPE still expects to see large discoveries made—for oil or gas— and Abu Bakr was immediate in his response: “As far as huge gas discoveries, we believe the Red Sea will be the opportunity. Only seven companies have done any exploration in the Red Sea. Four of them between the mid-70’s and the mid-80’s and at that time, the seismic data acquirement was not technologically advanced enough to accurately reflect true reserves.”

Abu Bakr went on to say that the area is a challenging one to explore, as there is a large mobile salt layer that tends to absorb seismic energy. “It is a challenging area to get accurate data underneath the salt. Now we have the technology, 25-30 years ago it was not there.”

Abu Bak spoke about a meeting he hosted in December of 2013 at GANOPE’s offices, with major IOCs, service providers, and academics all attending. The goal was to crack open this issue of Red Sea exploration, and he said it was a very beneficial meeting. “We had a very good event opened by the Minister of Petroleum Sherif Ismail. It was a capabilities meeting. For operators, if you want to acquire good seismic data, what is your expectation? For seismic providers, what can you do to get their needs?”

When asked about all the problems with previous exploration done in the area, Abu Bakr explained that not only was technology not advanced enough at the time, but that there were only 12 wells ever drilled, not nearly enough to accurately examine the entire area. “The Red Sea is more than 800 km long, it has an average width of say, about 100-150 km. It is a huge area. To evaluate this area with 12 wells is not enough. And these 12 wells are based on old geological concepts, old ideas. The technology was not there. It is very old seismic data, poor imaging for underneath the geological structures.”

Abu Bakr is intimately familiar with the Red Sea; while he was previously working at Khalda he was loaned to program run by the World Bank that studied the oil and gas prospects of all the current Red Sea countries. Mr. Bakr spent three years working on the program, and he is very passionate about the opportunities to develop the area.

There are now 25 agreements GANOPE has made since its inception. This is over a period of about 10 years. 17 of these concessions are currently active.“My target with the current bid round will be to award all ten blocks. My target is to announce that we have 27 valid concessions.”

For now, the chairman explained, the company is simply trying to gather data so they can host a new bid round. “For the areas we have data, we are releasing bid rounds. I hope sometime in 2015 to start more data acquisitions so we are prepared to have more bid rounds in 2016.”

Abu Bakr concluded our interview by speaking about many of the achievements GANOPE has made over its first decade. Ten years is not a long time, and the company is working to encourage upstream investment in oil and gas, increase its fuel station network, and build downstream facilities such as pipelines and butane distribution. “We are trying to get new operators new faces, new investment. Honestly, we have had encouraging results. GANOPE has a bright future.”