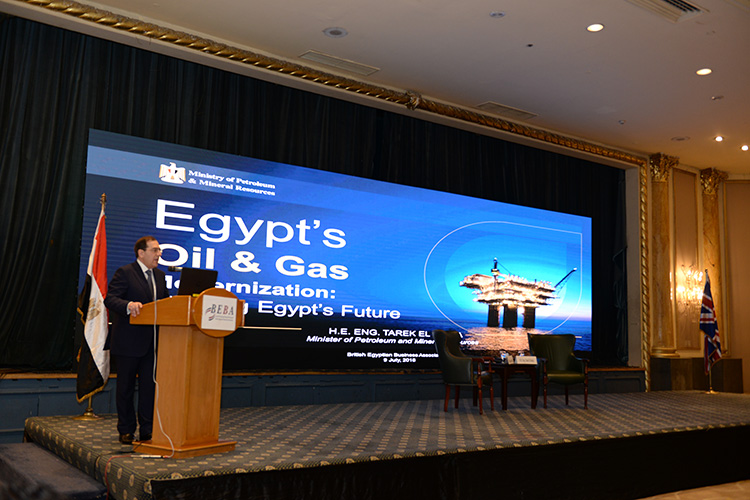 The British Egyptian Business Association (BEBA) held a dinner on July 9 in honor of the Egyptian Minister of Petroleum and Mineral Resources, Tarek El Molla. The event, that took place at the Intercontinental Hotel in Cairo, saw El Molla deliver a speech to prominent figures from Egypt’s domestic oil and gas sector, international oil companies (IOCs), and members of BEBA. The minister commented on the latest achievements of the Egyptian petroleum industry and the development of the sector’s Modernization Program.

BEBA chairman, Khaled Nosseir, also delivered a short speech addressed to the departing British ambassador to Cairo, John Casson. Nosseir praised the ambassador for being “very instrumental and very active” in helping to attract investment and solidify trade relations between Egypt and the UK. For his part, Casson said that the oil and gas sector “is at the heart” of the unique British-Egyptian business relationship, and thanked BEBA for its effort to forge closer business ties between the two nations.

BEBA is a non-governmental and non-profit organization established in 1996 to facilitate trade and investment between Egypt and the UK. It counts with over 700 members who promote extensive trade missions, seminars, and business workshops. Egypt Oil & Gas was among BEBA’s guests in the event and had the opportunity to follow up with the topics highlighted by minister Tarek El Molla during his speech.

“Modernization is not Just a Word”

El Molla’s first remarks centered on the structure and importance of the ministry’s Modernization Program. Positioning the project as one of necessity, the minister said that without reform the country “will not be able to defend, sustain or manage the sizeable wealth that we will be having in our discoveries.”

The modernization strategy – which encompasses projects such as the liberalization of the gas market and the reform of the sector’s structure – is an ongoing process. During his speech, El Molla discussed the six key components necessary to achieve the sector’s full modernization: increasing the performance and attracting further investment into the upstream sector; improving the efficiency and performance of the downstream operations; reforming the structure of the sector; enhancing HR management; realizing Egypt’s ambitions to become a regional energy hub; and developing the decision support and data flow for companies working in the sector.

Highlighting the plan’s innovative qualities, the minister said: “Modernization is not just a word. We are not imitating anybody. We are doing something really new.”

Commenting on the country’s latest achievements, El Molla confirmed that Egypt’s giant Zohr gas field is on track to produce 1.75 billion cubic feet per day (cf/d) by August 2018. The ministry expects Zohr to produce around 2 billion cf/d by the end of the year, before moving into the third phase in early 2019. The short amount of time to reach the third phase of the project, he said, would represent a world record. The worldwide average timing to reach this stage is around 48 months, while Zohr – should the production estimates be accurate – will have achieved this in just 18 months.

El Molla closed his speech commenting on the economic importance of the country’s recent fuel subsidy cuts. Keen to stress that this was an Egyptian – not an IMF – initiative, El Molla highlighted the importance of reducing government expenditure on subsidies. “We have to operate economically, we have to be driven by profits, not only by social aspects,” he said.

The cost recovery ratio on all fuel types – the ratio of revenue to operating costs – still lags behind 100%; 95 octane is the closest to breaking even at 92%, 92 Octane is at 88%, 80 Octane sits at 83%, while gasoil is the most cost-inefficient at 69%. Although the government continues to spend more on fuel than it generates in revenue, El Molla stressed that “great progress” has been made in reducing the burden of subsidies on state finances.

The minister also promised that there would be more action against subsidies to come. “We are continuing on without hesitation,” he said. “We are committed to reducing the subsidies until we reach a point where we get rid of them.”