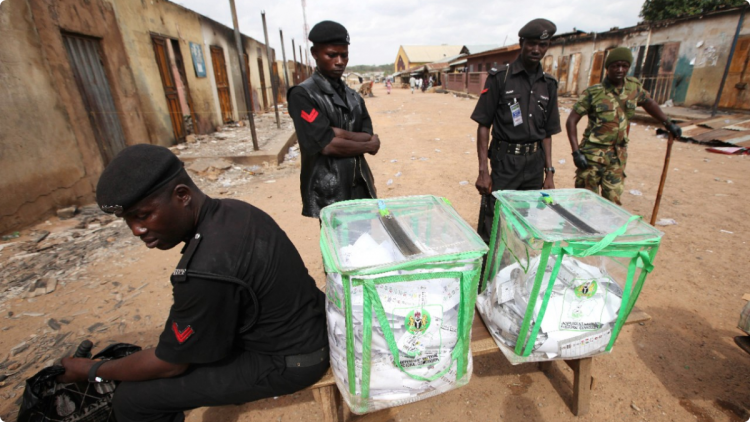 Nigerian President Goodluck Jonathan’s concession of defeat in presidential elections has mitigated the risk of an armed uprising in the main oil-producing region by militants who were intent on keeping him in power.

Jonathan, a 57-year-old Christian, is the first Nigerian leader to emerge from the southern region that produces almost all of the country’s crude, the source of 70 percent of government revenue and 90 percent of export income. While he retained support in the area in a March 28-29 vote, he lost nationally to Muhammadu Buhari, 72, a northern Muslim and former military ruler.

The oil-rich delta region was in turmoil between 2006 and 2009 when militants began an armed campaign for local control of crude, involving bombings and kidnappings that cut output by 28 percent. The violence abated after thousands of fighters accepted a government amnesty and disarmed. While some former militant commanders had threatened to take up arms again if Jonathan lost the election, the president has distanced himself from those calls.

“In Port Harcourt, I see many people disappointed, but I don’t see the sort of anger to erupt into violence” Ledum Mitee, a lawyer and Niger delta minority rights activist, said in a phone interview from the oil-industry hub late Tuesday. “Even if it starts, it will be sparks, which can easily be contained.”

Mitee, who had campaigned with environmentalist Ken Saro-Wiwa, who was executed by the military in 1995 over murder charges, headed a government committee that recommended amnesty for the militants, including the main rebel group, the Movement for the Emancipation of the Niger Delta, or MEND.

While the violence has eased since 2009, piracy and theft of crude from pipelines remain rife in the region. Nigeria is Africa’s biggest oil producer and pumped 1.9 million barrels a day in March, according to data compiled by Bloomberg.

The almost halving in oil prices since June is also hurting the economy. Oil exports will probably slump to $52 billion this year compared with $88 billion in 2014, according to estimates from the International Monetary Fund. A plunge in revenue has forced the government to scale back on spending and contributed to the naira’s 17 percent drop against the dollar in the past six months. West Texas Intermediate Crude traded at $49.90 per barrel at 10:41 a.m. in London on Thursday, down from $90.35 a year ago.
‘Unity, Stability’

Jonathan assumed the presidency after his predecessor Umaru Yar’Adua died in office in 2010, and defeated Buhari in elections the following year. The main opposition parties united to form the All Progressive Congress in 2013 and helped Buhari secure 52.4 percent in the March election, marking the first peaceful shift in power since the end of colonial rule in 1960.

“Nobody’s ambition is worth the blood of any Nigerian,” Jonathan said in a statement on Tuesday before final results were announced. “The unity, stability and progress of our dear country is more important than anything else.”

The threat of losing those perks prompted former militant commanders, including Ebikabowei Victor Ben and Mujahid Dokubo-Asari, to warn that attacks on the oil industry may resume if Jonathan was unseated. The two didn’t answer calls to their mobile phones seeking comment.

“The somewhat subdued activities of militants in the region are not unconnected with the emergence of a president from the region,” Dolapo Oni, head of energy research at Ecobank Transnational Inc. in Lagos, the commercial capital, said in an e-mailed response to questions. “There are potential risks of some resurgence in militant activity in the region.”

Jonathan’s critics accuse him of pampering former fighters, while failing to tackle other deep-seated problems in the delta, such as poverty, environmental pollution and a lack of development.

“The amnesty that brought relative peace to the Niger delta wasn’t started by him but by Yar’Adua,” Anyakwee Nsirimov, executive director of the Institute of Human Rights and Humanitarian Law, said in a phone interview from Port Harcourt late on Tuesday. “Instead of building roads, he started monetizing the amnesty by paying the former militants.”

A faction of MEND loyal to Henry Okah, the group’s leader currently jailed in South Africa on charges related to a 2010 bombing in the Nigerian capital, Abuja, fell out with Jonathan, accusing him of failing to address the oil region’s woes. Ahead of the elections, Okah’s group backed Buhari.

“President-elect General Muhammadu Buhari’s message of hope, freedom and opportunity resonates with our group, as it does with the Nigerian people,” Jomo Gbomo, spokesman for the faction, said on Wednesday in an e-mailed statement.

The group congratulated Buhari, while commending Jonathan for conceding defeat.