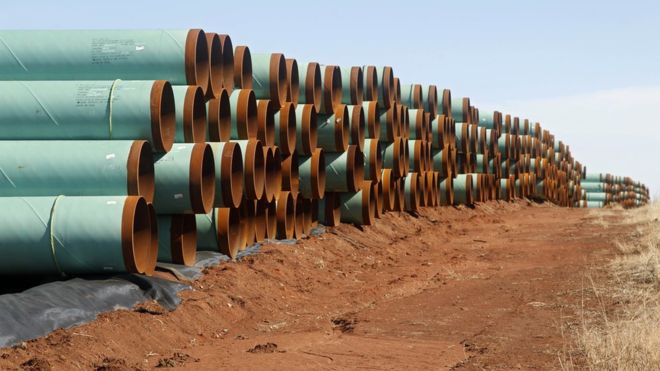 TransCanada, the company tasked with building a mammoth oil pipeline linking Canada and the United States, has asked the US government to postpone a final decision on whether the project will go ahead, apparently fearing the outcome could be in the negative, the BBC reports.

The proposed Keystone XL pipeline would carry heavy crude oil from Alberta oil sands in Canada down to Nebraska and on to refineries on the Gulf Coast, covering almost 1,897km on it’s journey south.

President Barack Obama is widely expected to reject the project, which has provoked strong criticism on environmental grounds.

The White House said on Monday that the final decision on the project would be made before the end of Obama’s term in office in January 2017.

“Our expectation at this point is that the president will make a decision before the end of his administration on the Keystone pipeline, but when exactly that will be, I don’t know at this point,” White House spokesman Josh Earnest told reporters.

TransCanada said that the delay in decision-making was necessary due to negotiations on the route through Nebraska. However,  according to Reuters, the request for a delay signals that the company would rather suffer an indefinite postponement than a definite ‘no’.

A postponement would leave open the possibility of a new US president looking more favorably on the project.

Another obstacle for the pipeline project could come in the form of Canada’s newly elected Prime Minister, Justin Trudeau. Normally supportive of the project, Trudeau may not be as determined as is predecessor Stephen Harper in the face of concerns from the White House.