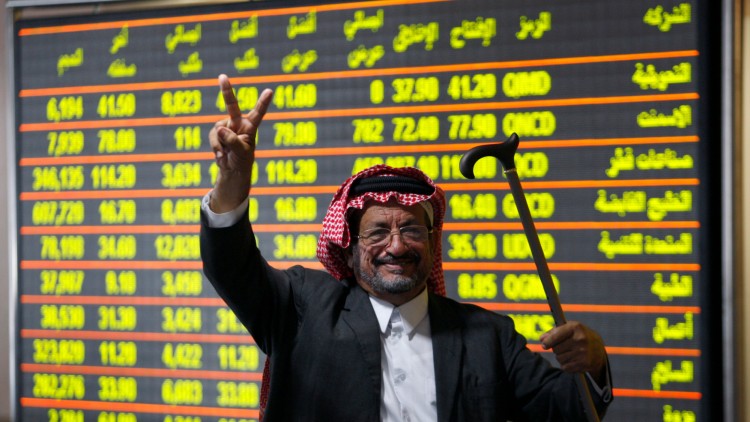 Saudi Arabian stocks jumped the most in six weeks, leading a rally across Arab equity markets, after the country’s king pledged to restore stability in Yemen.

The Tadawul All Share Index, the main gauge for the world’s biggest oil exporter, added 2.2% at 12:07 p.m. local time, the sharpest increase since Feb. 15. Qatar’s QE Index climbed for the first time in three days, and Abu Dhabi’s ADX General Index headed for the highest close in two weeks. The Bloomberg GCC 200 Index, a gauge of the Gulf Cooperation Council’s top 200 equities, was on course for the biggest advance in more than a month.

Equity markets across the Middle East were caught in a selloff last week as a Saudi-led coalition started bombing targets in Yemen after Shiite rebels advanced on the southern port of Aden, where forces loyal to President Abdurabuh Mansur Hadi have rallied. Saudi Arabia’s King Salman yesterday told Arab leaders the coalition would press its military offensive until stability in Yemen is restored.

“The message from the Saudi king is very clear and it shows they have the willpower to go all the way,” Muhammad Shabbir, the head of equities at Rasmala Investment Bank Ltd. in Dubai, said by telephone today. “This adds to the hope that the issue will be resolved.”