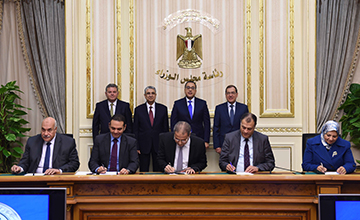 In an effort to end the financial debts accumulated for more than 30 years, the Ministries of Electricity and Renewable Resources, Petroleum and Mineral Resources, Finance, and the General Public Sector signed three protocols of cooperation, according to a press release.

The protocol entails a mechanism for Public Sector companies to pay their due debts to the holding companies affiliated with the aforementioned ministries and EGPC.

The second protocol involves a mechanism for paying due debts owed to EGPC and its subsidiaries. The protocol was signed between EGPC’s CEO and the Egyptian Electricity Holding Company’s Chairman.

The third protocol was signed by the Egyptian Electricity Holding Company and the Ministries of Electricity and Renewable Energy, Petroleum and Mineral Resources, and Finance. The protocol aims to resolve any financial disputes and to reach an agreement for any future deals between them.

It is worth noting that these protocols include the value of the financial arrears until June 30, 2019, in addition to setting main principles for regulating future transactions in Fiscal Year (FY) 2020/21, to avoid the accumulation of any arrears or receivables in the future.