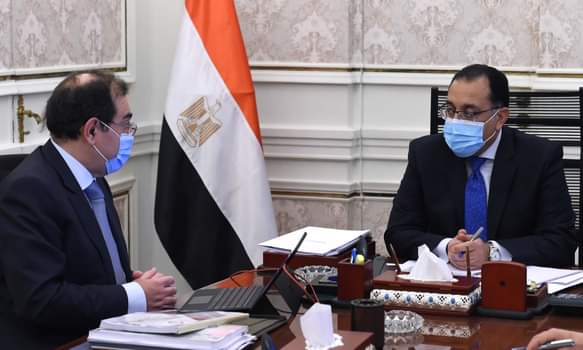 Prime Minister, Mostafa Madbouly reviewed with the Minister of Petroleum and Mineral Resources, Tarek El Molla, the implementation of ongoing projects, according to a press release.

During the meeting, the petroleum minister demonstrated the expansion of the natural gas delivery to households, noting that 12.2 million residential units were connected to natural gas, serving about 51.8 million citizens, while the number of residential units expected to have a gas connection by the end of June is 1.2 million.

According to El Molla, the number of bakeries connected to natural gas within the first phase of the initiative till the end of June 22021 is 5625. He also touched up on the expansion process to get cars run on compressed natural gas (CNG), noting that the number of  natural gas stations is going to reach 1000.

Additionally, the Petroleum Minister highlighted the implementation process of the Red Sea Petrochemical Complex project with investments amount to $7.5 billion.

He also shed light on the Midor refinery expansion project in Alexandria with an investment of about $2.3 billion. This project targets   maximization of petroleum production, by increasing the current refining capacity from 100,000 to 160,000 barrels per day (bbl/d). The detailed engineering works of the Midor refinery project have been completed by 95%, while the actual progress of work has reached 69%.

Furthermore, El Molla explained the diesel production complex project of the Assiut National Oil Processing Company (ANOPC) with an investment of about $2.9 billion, noting that the project is expected to start operation in Q3 of 2023.

He also demonstrated the asphalt production unit project at the Suez Oil Processing Company (SOPC), with a production capacity of 1,200 tons of asphalt per day.

Concerning the Alamein Pipeline project where investments of EGP 540 million are pumped, El Molla said that it is expected to start operation in Q3 2021.