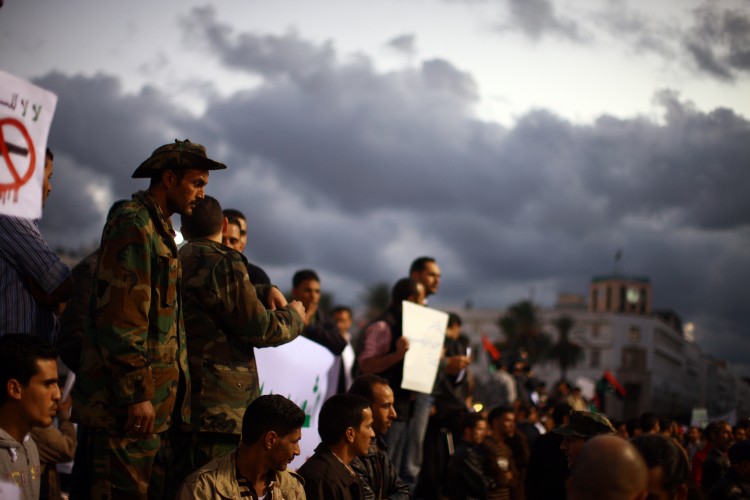 The violence roiling Libya has increasingly targeted oil companies and their assets, upending long-term investments by Western companies and driving down production in a country that helped trigger the world-wide rout in oil prices.

In short order, Libyan oil output has fallen to about 325,000 barrels a day in January from nearly 900,000 barrels a day in October, largely because of oil fields being taken over by Libyan militias or shutdowns due to security concerns, according to officials at the state-owned National Oil Co.

The plunge in production comes after civil war broke out mid-2014, leading to two big closures at the end of the year.

French major Total SA closed the Mabruk oil field in central Libya, a facility that once produced 30,000 to 40,000 barrels a day. And the country’s main oil port, known as Sidra, was closed because of fighting, damping prospects for three U.

S. companies that have a stake in fields connected to the port— ConocoPhillips , Marathon Oil Corp. and Hess Corp.

Both sites were in the cross hairs of gunmen on Tuesday. There was fighting in the vicinity of Sidra, while at Mabruk at least nine guards were killed in an attack, said Mashallah al-Zawie, a top Libyan oil official.

Fighting Resumes Near Libya’s Largest Oil Port
Gunmen Storm Libyan Oil Field, Killing Four
Libya Declares Force Majeure on Two Key Oil Ports
Blaze at Libya’s Largest Oil Port Extinguished
Libya has been mired in violence and political divisions since longtime dictator Moammar Gadhafi was killed in an uprising in 2011. A civil war has broken out between the internationally recognized government based in the country’s east and a rebel faction known as Libya Dawn that controls the country’s capital of Tripoli.

“There was an implicit agreement between the different factions to avoid disrupting oil production,” said Richard Mallinson, an analyst at London-based consultancy Energy Aspects. “Now the parties have realized that controlling oil means power.”

The instability has affected other Western energy companies in the country. Late December, Wintershall HoldingGmbH shut down its Libyan production because of the fighting at Sidra, which is close to the Ras Lanuf and Zueitina terminals it uses. The German company says it has invested more than $2 billion in Libya for a daily production capacity of 90,000 barrels.

Now the parties have realized that controlling oil means power.’
—Richard Mallinson, geopolitical analyst at London-based consultancy Energy Aspects
Austria’s OMV AG said its North African business also was being hurt by the unrest. The company is a partner in oil fields in central and southern Libya where it says it produced an average of 8,000 barrels a day last year.

“The outlook in 2015 is even tougher,” OMV Chief Executive Gerhard Roiss said recently, citing both lower oil prices and the Libyan crisis at a briefing for the company’s quarterly update. “In Libya, this situation is not changing; it’s deteriorating.”

ENLARGE
Earlier in 2014, the situation wasn’t so dire. Despite fighting raging in Tripoli last summer, Libya surprised the world with a sudden burst of new oil. By October, the country was pumping 887,000 barrels a day, up from 232,000 in June, according to the Organization of the Petroleum Exporting Countries, of which Libya is a member.

Global prices for crude have tumbled as investors realized that a glut of oil was hitting the market despite volatility in places such as Libya. In six months, the price of Brent crude plunged to less than $50 a barrel in January, from a high of $115 a barrel in June. On Friday, it was trading at around $58 a barrel.

Lately, the market has reacted little to the renewed fighting in Libya and the cutback in supplies there. Analysts say OPEC’s decision in November not to cut production virtually guaranteed an oversupply whether Libya produces or not.

The combination of falling prices and the threat of violence has chilled oil-company activity in Libya. At the Sidra oil terminal, ConocoPhillips, Marathon Oil and Hess were part of a rush to return to Libya after economic sanctions were lifted against the Gadhafi regime in 2003, supplying a port that recently was exporting 300,000 barrels a day.

The fighting hasn’t affected Libya’s offshore production, which for now is out of reach of the belligerents. Two offshore fields operated by Italy’s Eni SpA and Total joint ventures amount to about 100,000 barrels a day. Other oil output largely comes from desert fields in far-out areas of western and eastern Libya that have been spared by the civil war.

But in general the fighting has dealt Libya’s oil sector a heavy blow, officials and experts say. Even if there is peace, said Geoff Port, head of political risk firm North Africa Risk Consultancy, “you won’t see an immediate return of previous production levels.”