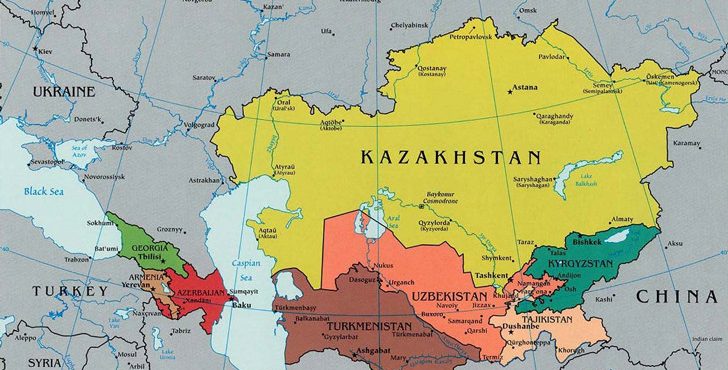 Kazakhstan, an oil producer since 1911, has the second largest oil reserves as well as the second largest oil production after Russia in the post-Soviet space. Soviet Kazakhstan’s oil production did not increase to a meaningful level until the 1960s and 1970s, when production plateaued at nearly 500,000 barrels per day (bpd), a pre-Soviet independence record production level. In the 1970s, several large discoveries were made in pre-salt reservoirs including Karachaganak and Tengiz. However, the development of these fields was not possible at the time because of the technical challenges of developing the deep, high-pressure reservoirs.

Kazakhstan has proven crude oil reserves of 30 billion barrels, Eurasia’s second largest reserves after Russia, and the twelfth largest in the world, just behind the United States. With the assistance of major international oil companies, in 2003 Kazakhstan’s production exceeded one million bpd.

In 2014 Tengiz and Karachaganak, Kazakhstan’s two largest projects, accounted for around half of the country’s 1.7 million barrels per day (bpd) oil production. With reserves estimated at up to 25 billion barrels, the Tengiz field is one of the world’s largest oil fields, rivaling the Gulf of Mexico in reserves of oil. Karachaganak gas condensate field, in northwest Kazakhstan, is estimated to contain 1.2 trillion cubic meters of natural gas and one billion tons of liquid condensate and crude oil.

Last year this pair of onshore hydrocarbon producing giants was to have been joined by initial production from Kazakhstan’s offshore Caspian Kashagan field; approximately 81 miles west of Tengiz, Kashagan, the largest known oil field outside the Middle East and the fifth largest in the world in terms of reserves, is the world’s largest oil discovery in the last 30 years. Kashagan, discovered in 2000, was the largest new deposit since the discovery of the Prudhoe Bay field on the North Slope of Alaska in 1968. Kashagan has potential reserves estimated to be as high as 70 billion barrels with recoverable reserves estimated at 7-13 billion barrels of crude oil.

In comparison, the Norwegian sector of the joint British-Norwegian North Sea oil fields contains approximately 30 billion barrels of recoverable crude. While North Sea oil was discovered in the early 1960s, its first well only began producing in 1971; costs and technological hurdles delayed full development of the fields until the 1980s, when rising oil prices, made the North Sea development profitable.

In autumn 2007, however, the Kazakh government, citing environmental concerns and cost overruns, renegotiated the PSA agreement. When the dust settled in January, KazMunaiGas increased its share in the Kashagan project from 8.33 percent to 16.81 percent as a result of its foreign consortium partners surrendering 2 percent apiece of their stake while agreeing to pay up to $ 5 billion as compensation for lost profits due to cost overruns and significant delays in commercial production.

Despite the foreign investment, similar to the North Sea, things at Kashagan haven’t quite worked out as planned.

Most of the repeated delays at Kashagan resulted from the field’s unusually adverse operating environment and complexity, resulting in significant cost overruns. The Kashagan reservoir is located more than 2.5 miles below the seabed and is under very high pressure, 770 pounds per square inch. In addition, the reservoir contains high levels of highly toxic and corrosive hydrogen sulfide (H2S). Furthermore, conventional drilling and production technologies such as fixed or floating platforms cannot be used because of the shallow water and cold climate. Instead, offshore facilities are installed on artificial islands housing drilling and processing equipment.

As a result, costs at Kashagan have ballooned to an estimated $116 billion, making Kashagan the world’s most expensive energy project.

On September 11, 2013, initial production from the super-giant field commenced, eight years after the original scheduled startup at 26,000 bpd. The Kazakh government had hoped quickly to ramp up production to hit 370,000 bpd by 2015 and within several years to about 1.5 million bpd, about 1.6 percent of the world’s total, or roughly the amount Libya produces.

A mere 13 days later production was suspended after a gas leak at the pipeline from Island D to the onshore Bolashak refinery was discovered. After the leak was repaired production resumed but on October 9 output was again halted when another gas leak was discovered.

The cause of the problem was identified as “sulfide stress cracking,” a form of corrosion caused by Kashagan’s H2S. On April 23 a NCOC executive said that the company had concluded that 55 miles of subsea pipelines carrying natural gas and oil from Kashagan offshore wells for processing onshore oil fields will need to be replaced.

The Kashagan pipeline debacle may be just the tip of the iceberg. If the pipeline issue is the result of not using sour service steel pipe as required for the H2S content of the reservoir fluid and if they also used regular pipe instead of sour service pipe for the well completions, then there is a very good chance that very expensive well work-overs are necessary, which would along with the pipelines cost billions in additional repairs.

Further financial trauma at Kashagan may occur as the full extent of the H2S corrosion is determined. MFX Broker analyst Sergei Nekrasov said, “After replacing, the new pipelines, consisting of a special alloy, will be 10-15 times more expensive than those used previously. The replacement cost could reach $250-500 billion,” which could balloon Kashagan’s costs to $400-600 billion.

The good news for the Kazakh government came on June 1, when Kazakh Energy Minister Vladimir Shkolnik told parliamentary hearings in the Majilis, “Gas pipelines and oil pipelines are being replaced at Kashagan. The work is three weeks ahead of the approved schedule,” adding that the repair work at Kashagan should be completed in December 2016, allowing oil production to resume.

At least one investor is betting that Kashagan will fulfill its potential. On September 7, 2013, Chinese President Xi Jinping signed a $45 billion agreement with KazMunaiGas for state-owned China National Petroleum Corp. to purchase an 8.33 per cent stake in Kashagan.

While little is certain about Kashagan’s future, it is clear that when production resumes, it will be with some of the highest production costs in the world, lowering the profit margin for those optimistic Western companies that flooded into Kazakhstan after Kashagan’s discovery 15 years ago in search of easy money.