Minister of Petroleum and Mineral Resources Tarek El Molla announced the results of the first digital international bid round for oil and gas exploration and exploitation in the Mediterranean, Western Desert, and the Gulf of Suez, in which ENAP Sipetrol has been awarded the West Amer Block in the Gulf of Suez.

ENAP CEO, Andres Roccatagliata, commented on that by stating: “This award is an important achievement for the company, which allows us to strengthen our exploration portfolio in Egypt, a country in which we have had very good results. This new block will allow us to generate significant income and an important increase of production in the country.” 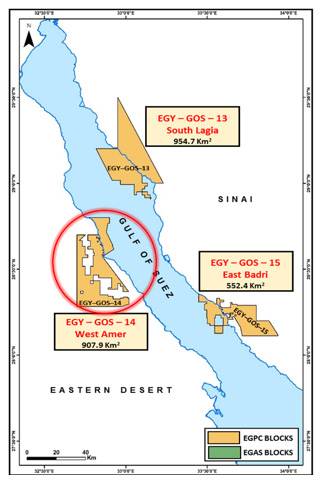 Chief Executive Officer of ENAP Sipetrol and General Manager of the Egypt Branch, Denisse Abudinen, also commented, “ENAP Sipetrol has been a partner in Egypt’s growth for more than 23 years, and this award reaffirms our commitment to pursue high-quality opportunities in the country. We look forward to work with the government and deploy our proven expertise and advanced technology.”

West Amer Block is located on the onshore central Gulf of Suez. It is in the vicinity of a grand prolific oil field, such as Bakr, and Gharib fields towards the East; and several scattered discoveries have been included recently in the area. The first oil discovery in Gulf of Suez was in 1868. This province continues to promise considerable prolific exploration potential.

Currently, ENAP Sipetrol Egypt has operations in East Ras Qattara block in the Western Desert and has an average production of 12,000 barrels of oil per day. With this bid round, the area where exploration and production activities are developed in Egypt has been increased significantly.