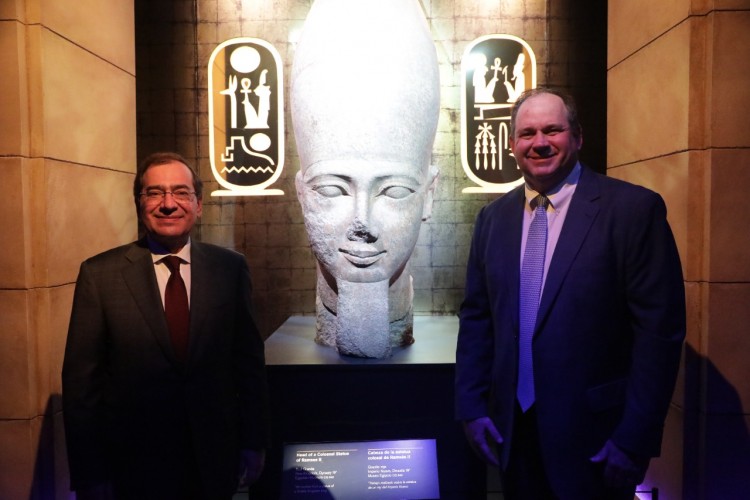 On the sidelines of the 23rd World Petroleum Congress, Minister of Petroleum and Mineral Resources Tarek El Molla held bilateral talks with John Christmann, President and CEO of Apache Corporation in Houston, Texas.

They discussed the company’s plans to increase its investments in Egypt as well as intensify exploration and production activities in its concession areas, the Ministry said in a statement.

Apache is one of the main partners in the petroleum sector, El Molla said, adding that it achieved distinguished results during its work period in Egypt, which extends for more than 25 years, especially in the Western Desert.

For his part, Christmann confirmed that Egypt has become the most important area in Apache’s portfolio, pointing to the company’s commitment to implementing its investment plans and raising the efficiency of operations in order to increase production rates.

In a related context, Christmann hosted El Molla at the Hall of Ancient Egypt at the Houston Museum of Natural Science. It should be noted that Apache Corporation is sponsoring the Hall to promote Egypt’s cultural heritage in the US.

“As the largest oil producer and American investor in Egypt, Apache serves as a bridge between our two countries and promotes U.S.-Egypt business relations and economic cooperation,” said Christmann.

“We are thrilled to showcase Egypt’s vast, rich cultural heritage and the significant historical wonders of Egypt’s ancient civilization for the American public,” he added.

On this occasion, El Molla stated “We are thankful to Apache and the Houston Museum of Natural Science for this expansive display of ancient Egyptian history. The artifacts and immersive experience share the amazing story of Egypt’s rich heritage, taking visitors to a place and time many have only read about.

“It was a pleasure to visit with the Apache leadership team in Houston and celebrate our 25-year partnership. We look forward to working together for many years ahead as Egypt expands energy production and becomes a regional energy hub,” El Molla added.