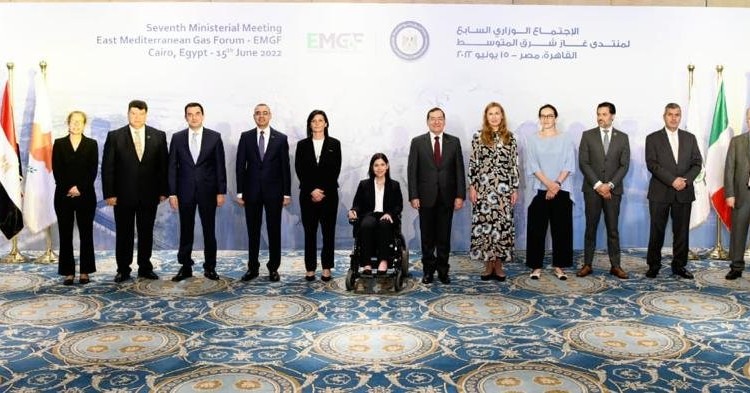 In his opening speech during the seventh ministerial meeting of the East Mediterranean Gas Forum (EMGF), Minister of Petroleum and Mineral Resources Tarek El Molla said that the current changes witnessed by the world demonstrate the significant role of the EMGF in securing energy supplies.

He highlighted that this is evident considering what is available in the Eastern Mediterranean region from the potential for gas production and its ability to increase exports to Europe through the available facilities.

The minister noted that the forum is working on developing natural gas production. He also referred to the importance of energy transition, the adoption of an emissions reduction strategy and the expansion in hydrogen production to achieve economic and sustainable growth. He pointed out that the meeting tackled discussions about the natural gas industry, increasing production and launching initiatives for carbon emission reduction.

During the meeting, Cypriot Minister of Energy, Commerce, and Industry Natasa Pilides affirmed that the forum contributes to finding suitable solutions for securing energy on the regional and international levels. She saw that the forum will enhance and support gas supplies to European markets. Pilides stated that Cyprus will host the next ministerial meeting of the forum which will be held in October 2022.

Israeli Minister of Energy Karine Elharrar expressed her appreciation for Egypt for the organizing of this meeting which reflects the stable relations in the region, referring to the geopolitical conflict which takes place in Eastern Europe and its impact on the energy supplies. She highlighted that Israel is exporting natural gas to Europe under the EMGF umbrella.

In addition, Greece’s Minister of Environment and Energy Kostas Skrekas, confirmed that the forum can support Europe in finding alternative energy supplies, noting that Egypt, Cyprus and Israel will be reliable suppliers to Europe. He highlighted that it is important to ramp up exploration and production (E&P) operations, increase investments in raising energy efficiency, as well as promote efforts in carbon capture and storage (CCS) and hydrogen production.

For his part, Jordanian Minister of Energy and Mineral Resources Saleh Al-Kharabsheh affirmed the importance of accelerating the energy transition by expanding hydrogen and natural gas utilization through joint partnerships. Helen Danton, Director of Economic Diplomacy at the French Ministry of Europe and Foreign Affairs, stressed the necessity of diversifying and conducting partnerships to secure energy supplies.

Furthermore, Advisor to the Palestinian President for Economic Affairs, Muhammad Mustafa, said that Palestine is not able to develop its natural gas resources asking the member countries to respect the international laws as well as Israeli officials to allow Palestine to improve its resources.

Vannia Gava, Italy’s Undersecretary of State at the Ministry of Ecological Transition, said that the East Mediterranean discoveries enabled the cooperation and securing of energy resources.

European Commissioner for Energy Kadri Simson stated that the European Union (EU) is a strong supporter of the EMGF, noting that gas supplies from the East Mediterranean via Egypt can secure needed supplies for Europe.

Moreover, Deputy Assistant Secretary for Europe, Eurasia, Africa, Middle East at the U.S. Department of Energy Joshua Volz, said that the priorities of cooperation within the forum are to achieve net-zero emissions in the region.

Furthermore, Regional Director of the World Bank (WB) for Egypt, Yemen and Djibouti Marina Weiss stated that the forum is playing a significant role in supporting initiatives and strategies for energy transition, especially at this critical time noting that WB is ready to support these efforts through providing the needed training and technologies.