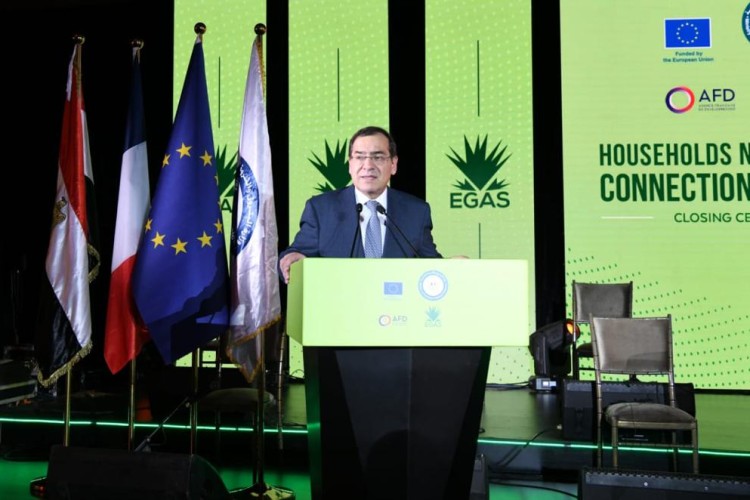 The minister stated that this development in the rates of natural gas delivery to homes serves over 60 million citizens in these units and saves about 250 million gas cylinders annually.

This came during the minister’s speech during the meeting, which was held in the presence of the leaders of the petroleum sector and the ambassadors of the European Union (EU) and France in Cairo, at the conclusion of the joint project funded by the EU, the French Development Agency and the World Bank (WB) to deliver natural gas to about 2.3 million households in 20 governorates in cooperation with the Egyptian Natural Gas Holding Company (EGAS). The project further aimed to supporting the company’s digital transformation projects to implement the ERP system, supporting the restructuring of the gas market and establishing the market regulatory body.

The project comes within the framework of the growing and extended cooperation between Egypt and the EU, where the Ministry of Petroleum and Mineral Resources worked to establish various partnerships in support of its strategy to maximize the utilization of natural gas resources, which has become the main fuel in the energy sector in light of the state’s drive towards energy transition, decarbonization, climate action, and diversification of Egypt’s energy mix, El Molla noted.

El Molla stated that the results of the project during the past years, in cooperation between the EGAS and Success Partners, call for pride, pointing out that the Egyptian Parliament had agreed to extend the due date of the EU grant funded for the project until December 2023 to deliver gas to 380,000 additional families, including 300,000, that already received gas before the end of this year.

Head of the EU Delegation to Egypt Christian Berger said that the EU has achieved tangible achievements this year with the Ministry of Petroleum and Mineral Resources within the framework of joint cooperation, as the tripartite memorandum of understanding was signed last June between Egypt, the European Union and Israel, which paves the way for regional cooperation in the field of natural gas under the umbrella of the Eastern Mediterranean Gas Forum, to transfer trade and export of gas to the European Union, as well as stimulating cooperation in the field of green energy transition. Memoranda of understanding were also signed with Egypt in the field of hydrogen during the COP27 which opens new horizons for cooperation between the two sides in the field of green energy transition.

The project is one of the largest projects in the world and reflects the strategic partnership with Egypt. For his part, the French Ambassador to Cairo Marc Baretti stressed the importance of the project because of the civilized service it provides to citizens and the reduction of dependence on butane gas, which in itself is a shift towards clean energy that serves the efforts to preserve the environment and reduce emissions.

Meanwhile, Rania Al-Mashat, Minister of International Cooperation, said that the project to deliver natural gas to homes, which comes in light of cooperation with the EU and the French Development Agency (AFD), aims to implement very basic activities in the lives of citizens by connecting all families to the national gas grid, and maximizing the number of beneficiaries among the poor and disadvantaged families, and supporting institutional reforms for gas to ensure a sustainable energy policy.