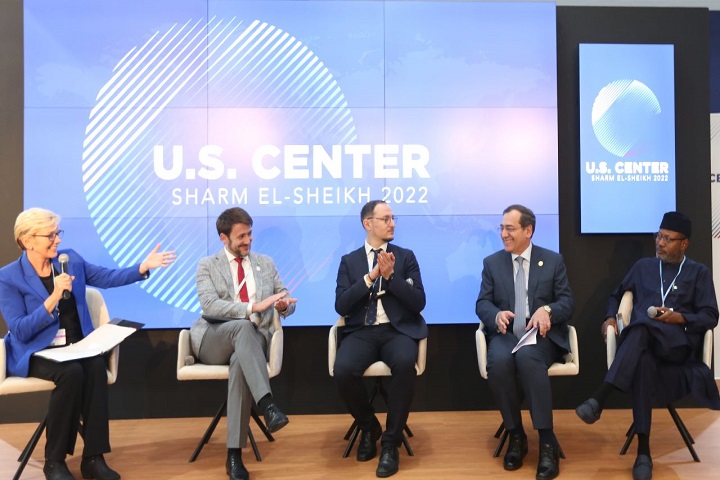 Minister of Petroleum and Mineral Resources Tarek El Molla stated that Egypt has a strategy to accelerate access to renewable energy such that its contribution to Egypt’s energy mix will reach 42% by 2030, the ministry said in a statement.

This is a more ambitious strategy compared to previous plans to achieve this goal by 2035, according to El Molla.

His statement came during his participation in the “Net Zero World Initiative” session at COP27, in which El Molla explained that 10 memoranda of understanding (MoUs) were signed for green hydrogen with capacities of up to 50 gigawatts.

It was arranged to replace 28 gigawatts of power stations that operate with fossil fuels to operate with renewable energy during the next few years gradually, El Molla said. He added that with regard to the Zero Emissions Initiative and the Methane Reduction Pact which Egypt joined, an action plan has been developed for implementation, as work is being done to decarbonize about 120 oil and gas projects as well as recover flare gas.

The minister thanked US Secretary of Energy Jennifer Granholm for inviting him to attend the Net Zero World Initiative for the second time after he attended its launching last year in Glasgow, and Egypt joined it to benefit from the technologies, solutions, and information it provides that contribute to achieving sustainable development.

Granholm explained that this initiative is the result of the efforts of nine federal agencies and 10 laboratories of the US Energy Information Administration, with the support of the academic community, philanthropic institutions and the private sector, as well as countries that have ambitions to work in the field of combating climate change.

Ministers and representatives from Thailand, Indonesia, Chile, Ukraine, Nigeria, and Singapore presented their experiences in reducing emissions as well as their vision to benefit from the initiative and efforts to participate in the energy transition process.

The Net Zero World Initiative was launched by the US as an international initiative based on partnership with the countries of the world in the framework of efforts to accelerate the transition to energy systems free of carbon emissions, and it was launched on April 4 November 2021 at the American Center at the Glasgow Summit.