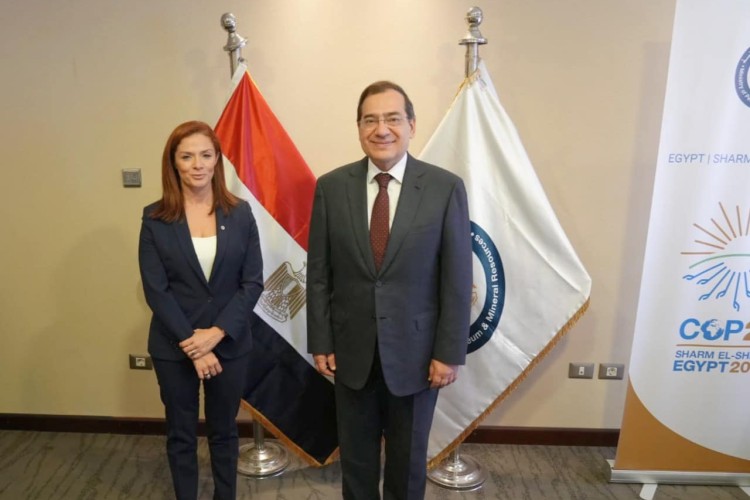 Minister of Petroleum and Mineral Resources Tarek El Molla met with Miriam Dalli, Minister of Energy and Environment of Malta, and her accompanying delegation, on the sidelines of their participation in the COP 27 Summit in Sharm El-Sheikh, the ministry said in a statement.

During the meeting, the two ministers discussed opportunities for cooperation and strengthening the partnership between the two sides in the oil and natural and liquefied natural gas (LNG) industry and benefiting from the available capabilities in the two countries in these activities for the benefit of the people of both countries.

El Molla highlighted the possibility of joint cooperation between the two countries in the field of gas trade and circulation by linking the existing facilities in Egypt and Malta during the coming period to meet Malta’s gas demands and from there to export to European countries, especially since LNG has become the most demanded at the present time, and the current prices encourage work and take advantage of the capabilities available in the two countries.

El Molla added that it was agreed that an Egyptian delegation would visit Malta to inspect the existing facilities in the activities of the liquefied gas industry and to coordinate and discuss opportunities for joint cooperation in this field during the coming period.

For her part, Dalli welcomed the cooperation with Egypt, especially as it is an energy center in the region and has the capabilities that qualify it to carry out this role efficiently. Dalli added that Malta has facilities to receive and gasify imported gas and is seeking to expand liquefied gas and renewable energy projects, and there are opportunities to import liquefied gas from Egypt.

Dalli pointed out that all information will be provided to the Egyptian delegation upon its visit to Malta.