Minister of Petroleum and Mineral Resources Tarek El Molla announced the launch of a new international bid round to search for natural gas and crude oil in 12 regions in the Mediterranean and Nile Delta, including six offshore and six onshore regions, through the Egyptian Upstream Gateway (https://eug.petroleum.gov.eg). 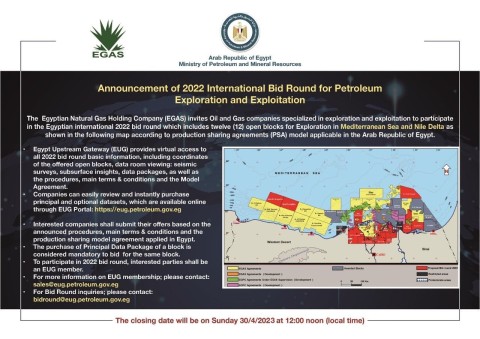 El Molla explained that the bid put forward by the Egyptian Natural Gas Holding Company (EGAS) for the year 2022 comes as an extension of the ministry’s work strategy which started in 2016 to attract more investments for oil and gas exploration in promising areas, especially the Mediterranean. He pointed out that the strategy provides opportunities to attract new international companies to work in Egypt, in addition to encouraging operating companies to increase their investments and expand their work areas.

The minister highlighted that these measures contribute to the Egyptian state’s efforts to intensify research and exploration activities for natural gas resources in the Mediterranean, in light of the efforts of Mediterranean countries to make new gas discoveries and increase production.

El Molla indicated that the bid is the third to be launched using the latest digital features of the EUG, which was launched by the ministry in early 2021 within the framework of adopting a new approach aimed at developing all its activities in the field of attracting investments for research and exploration projects. He highlighted that the portal provides digital and rapid access to basic information on the proposed bid and its regions, technical data for each region, seismic survey and well data, in addition to the basic terms and conditions, the agreement form, and the procedures for participation in the bid.