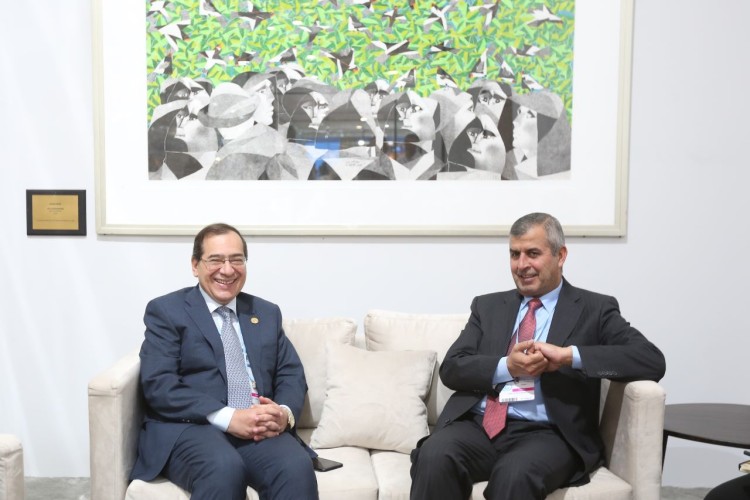 Minister of Petroleum and Mineral Resources Tarek El Molla held a round of talks with Saleh Al-Kharabsheh, the Jordanian Minister of Energy, in the Egyptian pavilion at the COP27, which is currently being held in Sharm El-Sheikh, the ministry said in a statement.

The meeting reviewed aspects of the joint relations between Egypt and Jordan in the natural gas sector. The talks also included a discussion of the energy transition efforts and the developments witnessed in both countries in light of the available opportunities for the development of natural gas and hydrogen resources.

At the beginning of the meeting, El Molla praised the fruitful international dialogue and rich discussions on energy transition and the exchange of visions between all parties.

El Molla added that Egypt adopts the use of natural gas as a clean transitional fuel in its energy mix to meet local needs and contributes to securing a portion of regional demand. He added that the petroleum sector is intensifying exploration activities for natural gas in promising areas as part of its efforts to increase reserves and production as well as provide larger quantities of natural gas.

Egypt has had extensive relations with Jordan in the field of natural gas that have witnessed great integration and coordination to achieve the common benefit of both countries, which is in line with the current stage that is witnessing increased dependence on natural gas as a clean fuel in the energy transition, El Molla stated. He emphasized the important role of the political leadership and governments in Egypt and Jordan in supporting these relations and pushing for their development.

For his part, Al-Kharabsheh referred to Jordan’s appreciation for the current integration and coordination with Egypt in the natural gas sector, stating that natural gas is the optimal fuel for the current stage, especially since the energy transition will be gradual and the use and development of traditional energy sources will continue in parallel with the development of green energy projects.

The Jordanian Minister of Energy reviewed the current efforts in Jordan to keep pace with the efforts to develop green energy, foremost of which is the study of opportunities for hydrogen production projects and opportunities for partnership with Egypt in this field, and an assessment of all aspects related to the establishment of hydrogen projects, especially as it represents the fuel of the future.

Al-Kharabsheh said that during the conference, European efforts to establish a hydrogen forum were discussed, and the initiative to launch it during the summit was announced as a global platform to support operations in this field.

The Jordanian Minister of Energy praised the wonderful organization of the climate summit in Egypt and the distinguished arrangements made by the Egyptian state in this regard.