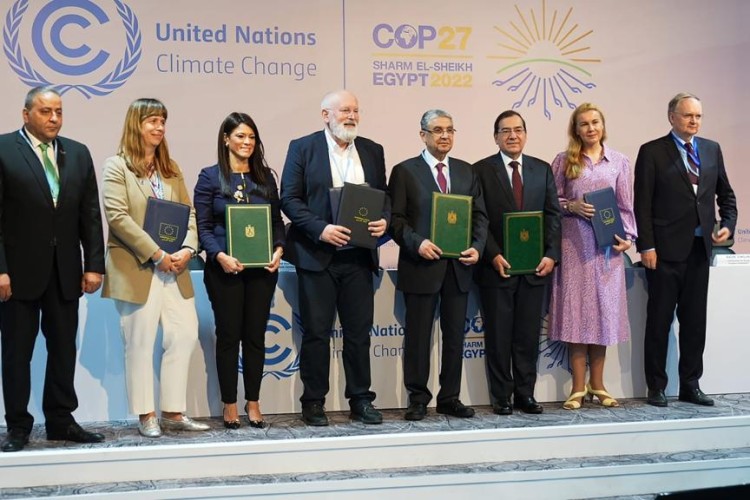 Minister of Petroleum and Mineral Resources Tarek El Molla has participated in signing of a memorandum of understanding (MoU) with the European Union (EU) for cooperation on green hydrogen and its derivatives production, consumption, and trade.

The MoU was signed on the sidelines of COP27, held in Sharm El Sheikh. It aims to encourage and boost investments in the infrastructure needed for hydrogen distribution, storage, and export as well as generating renewable energy.

Additionally, a joint declaration was signed in the frame of the Nouwfi project to support it with the needed water, food, and energy with EUR 35 million in support.

During his speech, El Molla affirmed this MoU came as one solution developed for securing clean energy resources with zero carbon in the shadow of global energy crises. He noted that hydrogen is one of the best solutions to overcome such crises.

The minister added that this MoU reflects the going forward of Egypt along with the EU to achieve a strategic vision in energy cooperation and achieve The Paris Agreement’s goals. He also presented the latest Egyptian efforts with its international partners to invest in the country’s hydrogen capabilities to become a regional hub for low-carbon hydrogen soon.

For his part, the Minister of Electricity and Renewable Energy, Mohamed Shaker, said that the green hydrogen industry is expected to grow rapidly due to the provision of technology noting that major countries started producing hydrogen and utilizing it in new and renewable energies.

Also, the Minister of International Cooperation, Rania Al Mashaat, said that the Nouwfi project, an ambitious project for the utilization of new and renewable energy and green hydrogen to promote the green economy, reflects the government’s international commitments with the international partners and joint agreements.

In addition, the EU Commissioner for Energy Kadri Simson said that Egypt has great capabilities in hydrogen, praising the declaration which is proof of COP27’s success. Moreover, the Executive Vice-President for the European Green Deal, Frans Timmermans, stated that the decarbonization transition is a must in the communities so clean hydrogen is very needed.