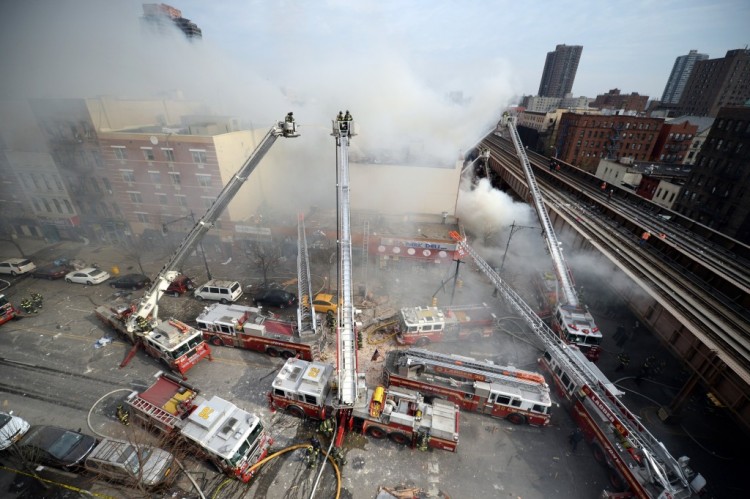 Two bodies were found on Sunday at the site of a gas explosion that destroyed three New York City apartment buildings last week, injuring 22 people, and officials were working to determine if they were those of two men unaccounted for, police said.

The bodies, whose genders were not immediately given, were recovered in an area reduced to rubble by the blast and fire in Manhattan’s East Village neighborhood on Thursday, the New York City Police Department said.

It was not immediately clear if the remains belonged to the two people who remain unaccounted for, police said, but local broadcaster NY1 News said one of the missing men, 23-year-old Nicholas Figueroa, had been identified by his family as one of the bodies found on Sunday. Also missing was Moises Lucon.

The two men were believed to be in a sushi restaurant in the building where the explosion occurred, New York Mayor Bill de Blasio told reporters. Lucon worked at the restaurant, according to NY1 News.

The first body was transported from the site on Sunday afternoon to the medical examiner’s office, police said.

On Sunday, rescue workers could be seen digging through the rubble backed by cranes hoisting debris and a front loader pushing twisted metal and bits of furniture into a pile on a street. Rescuers had been using used cadaver dogs to search for victims.

At a nearby restaurant, Local 92, a sign read: “Our hearts [are] with people who got hurt and lost their homes.”

In all, three buildings collapsed out of four that caught fire, and 11 buildings were evacuated, leaving residents of 144 apartments homeless.

Investigators were looking into whether gas and plumbing work being done privately in one building led to the explosion, and utility Con Edison said that its utility crew found dangerous gas line connections that created a “hazardous situation” during a visit in August.

The crew was sent to the building after a Con Edison worker reading gas meters smelled gas on Aug. 6 in the basement, company spokesman Allan Drury said, adding that the utility shut off the building’s gas for about 10 days, until it was determined to be safe.

The basement could hold the key to the cause of the devastation, police said. On Friday, de Blasio said the blast was possibly tied to someone inappropriately tapping into a gas line.

An hour before the blast Con Edison inspectors had been at the scene and determined that pre-existing work was not satisfactory, but the problems were not safety-related, de Blasio said.