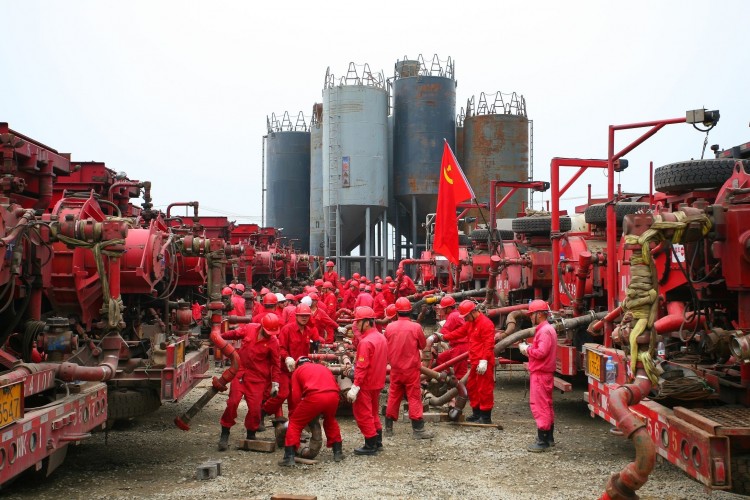 In the coming decade, China’s natural gas market is expected to undergo robust growth fueled by a number of environmental and economic drivers. A much discussed natural gas strategy for China is to develop its shale gas resources—an unsurprising choice given that the country is home to the largest technically recoverable shale gas reserves in the world.

China’s desire to achieve a U.S.-style shale boom is reflected in a 2012 plan to produce an ambitious 60 to 100 billion cubic meters of shale gas by 2020. Following this announcement, its government took an active role in promoting shale gas development by supporting shale technology research, providing fiscal incentives, reforming natural gas pricing and pipeline transportation, and opening up the sector – which is dominated by state-owned oil companies – to new entrants.

But by 2014, the State Council had already cut China’s 2020 shale gas production goal to just over 30 billion cubic meters, an acknowledgement of the significant obstacles the country faces in exploiting its shale gas resources.

Debate persists today over whether it is actually in China’s best interest to prioritize shale gas development since its conventional natural gas production is still growing, it has large reserves of tight gas (another type of unconventional natural gas), and its national oil companies already have mature technologies for extracting tight gas. While acknowledging this ongoing debate, I examine the prospects ahead for China should it continue to pursue its shale gas production targets.

The U.S. experience suggests that shale gas development can be conceptualized into two stages: an initial innovation stage and a secondary scaling-up stage. During the innovation stage, cost-effective extraction technologies are developed through experimentation and innovation. When technologies are proven to be cost effective, shale gas development enters the second stage, in which producers significantly ramp up their output. Technological improvements can continue throughout the second stage, helping to improve profitability and expand development into new plays.

The first stage of shale development is much more challenging than the second. Once drilling in a shale gas play has proven profitable, further capital investment in exploration and development is easy to attract, if shale gas drilling is open to profit-seeking investors. Unfortunately, China is in the first stage, where the fundamental challenge is to use learning and innovation to bring down extraction costs in order to make drilling shale wells a profitable venture – a goal it has yet to meet. Publicly available information suggests that by late 2013, China’s two national oil companies (NOCs), China National Petroleum Corp. (CNPC) and China Petroleum & Chemical Corp. (Sinopec), have lost over US$ 1 billion in the course of drilling early shale gas wells.

Why is the cost of drilling shale wells in China so steep? One can first point to a lack of learning by doing and economies of scale. Only a small number of shale gas wells have been drilled in the country so far, implying that firms have not gained enough of the experience needed to significantly improve their technologies and lower drilling and hydraulic fracturing costs.

It’s also important to keep in mind that China cannot yet spread the large fixed drilling costs, such as the cost to assess a resource base and build infrastructure such as roads and pipelines, over a large number of wells. Combined with the underutilization of drilling and fracturing machinery, these problems make it challenging for it to transition to the second stage of shale development.

Difficult shale geology is another major reason why the cost of shale gas extraction is high in China. Engineers inside and outside the country agree that its shale reserves are far more geologically complex than those found in North America, rendering existing extraction techniques too costly. If the geology – and depth – of the shale gas resources in China were very similar to that of the major shale gas plays in the United States, there would be little doubt that firms would have great incentives to drill wells in China—especially given that the wellhead price of natural gas in China is currently almost three times that in the United States.

To be sure, China’s lack of infrastructure and the need to transfer technology from the United States are all factors that can lead to incremental increases in production cost, but those costs could be calculated quite precisely and could surely be lowered fairly quickly if geology were favorable.

These suboptimal conditions mean that China will continue to face difficulties in lowering costs in the near term. Leveraging economies of scale and continued innovations can lower costs, but they require large initial capital and sustained investment in innovation. Given the considerable uncertainty over whether and when it would be profitable to drill shale plays in China, firms are likely to remain hesitant to invest significantly in drilling wells.

Current policies used by China to support shale gas development – including subsidies, research and development support, and natural gas pricing and pipeline access reform – appear justified on economic grounds; in fact, the U.S. government used similar policies from the late 1970s to the early 1990s to promote its own shale gas development.

In China, however, there is little to no chance that the government will allow private ownership of land and mineral rights. A plausible way for a private firm to obtain high returns from its risky investment in drilling innovations is for the government to allow this firm to have control over a large amount of land and mineral rights. However, it is very politically difficult for China to auction off large amounts of oil and gas resources to private firms so that their owners, rather than the state, can have the chance to realize great financial returns.
NOCs to the Rescue?

Given these considerations, it appears that China’s best hope for overcoming shale gas development’s fundamental challenges lies with its NOCs, which enjoy huge advantages over new entrants in terms of technology, experience, financial resources and policy. CNPC and Sinopec have significant experience in developing tight gas, and have acquired certain advanced technologies related to horizontal drilling and hydraulic fracturing.

The Big Two have already invested billions of dollars in acquiring shale gas assets in North America, even though the extent to which these acquisitions have ultimately helped them obtain the best technologies is not clear. What’s more, these the pair have been drilling in shale gas blocks with the most favorable geology and infrastructure in China, and have established national demonstration areas.

Under the assumption that it is justified to prioritize the development of shale gas, the key question remains how best to motivate the NOCs to invest in shale gas drilling. One potential way to incentivize them may involve incorporating shale gas investment into the evaluation criterion of the top NOC executives. Competition between government officials and the associated cadre evaluation system are considered by many scholars to be a major driver behind China’s rapid economic development. By increasing such political incentives, the NOCs could be motivated to make risky investments in shale gas drilling while paying less attention to the economics of such investments. However, trumpeting political incentives with no regard to economics is unlikely to be good policy either, since it will likely require more subsidies from the government to cover losses incurred by NOCs.

The smothering smog in many Chinese cities is a frequent reminder to policymakers in Beijing that there is an urgent need to replace the use of coal with natural gas or other cleaner sources of electricity generation. Unfortunately, it does not seem that a shale gas boom will materialize soon in China. Technologies must become much more cost effective – a process that requires strong incentives and considerable time – and it’s important to remember that the production of tight gas in the United States experienced significant increases before the shale gas boom occurred. Given that China’s NOCs already have the experience and technologies to develop conventional natural gas and tight gas, why not incentivize them to do so?