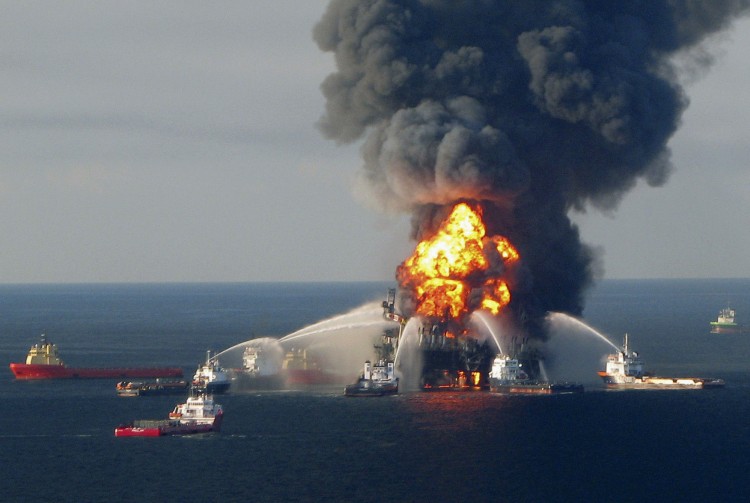 Fire boat response crews battle the blazing remnants of the offshore oil rig Deepwater Horizon, off Louisiana, in this April 21, 2010 file handout image. BP Plc is expected to pay a record U.S. criminal penalty and plead guilty to criminal misconduct in the Deepwater Horizon disaster which caused the worst offshore spill in the country’s history, sources familiar with discussions said on Thursday. REUTERS/U.S. Coast Guard/Handout/Files (UNITED STATES – Tags: DISASTER ENERGY BUSINESS) FOR EDITORIAL USE ONLY. NOT FOR SALE FOR MARKETING OR ADVERTISING CAMPAIGNS

BP (BP – Get Report) shares are down 2.13% to $40.47 in afternoon trading on Monday after the Supreme Court declined to hear an appeal from oil giant concerning fines that the company will be liable for in the wake of the 2010 Gulf of Mexico oil spill.

The Supreme Court will instead allow a lower court’s ruling that BP could not avoid federal fines for the spill by saying that another company’s failed equipment was responsible for the oil spill.

BP had argued, according to the Associated Press, that since the oil leak originated from an underwater pipe manufactured by another company that was damaged when the burning oil rig sank that the company was not liable for the oil spill.

“We rate BP PLC (BP) a BUY. This is driven by a few notable strengths, which we believe should have a greater impact than any weaknesses, and should give investors a better performance opportunity than most stocks we cover. Among the primary strengths of the company is its solid financial position based on a variety of debt and liquidity measures that we have evaluated. We feel its strengths outweigh the fact that the company has had lackluster performance in the stock itself.”