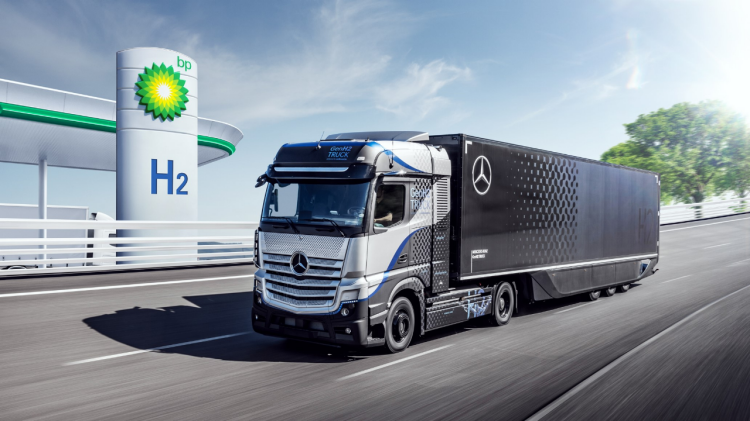 bp announced that has signed a memorandum of understanding (MoU) with Daimler Truck AG to develop hydrogen infrastructure and introduce hydrogen-powered fuel-cell trucks in UK.

This MoU came in the frame of the efforts to accelerate the introduction of hydrogen network to support the decarbonization of UK freight transport.

According to the MoU, bp will conduct a feasibility assessment of designing, constructing, operating and supplying a network consisting of up to 25 hydrogen refueling station across the UK by 2030. This network of stations will be supplied with ‘green’ hydrogen by bp, being produced from water with the use of renewable power.

For its part, Daimler Truck expects to deliver hydrogen-powered fuel-cell trucks to its UK customers by 2025.

Emma Delaney, bp’s executive vice president for customer and products, said, “Working with a leading manufacturer like Daimler Truck AG we can accelerate the deployment of both vehicles and infrastructure and pioneer the use of hydrogen to fuel the next generation of [UK] freight. From producing and supplying hydrogen through to building and operating the fueling stations, bp is perfectly positioned to transform transport and ultimately build a better energy future.”

Karin Rådström, CEO of Mercedes-Benz Trucks and Member of the Board of Management at Daimler Truck said, “Together with bp we want to jointly develop and scale the required hydrogen infrastructure by putting our hydrogen-powered fuel-cell trucks into our customers’ hand and thus supporting the decarbonization of the UK freight network. At the same time, political support plays an important role in promoting the creation of an infrastructure for green hydrogen and making an economically viable use of fuel-cell trucks possible for our customers”.