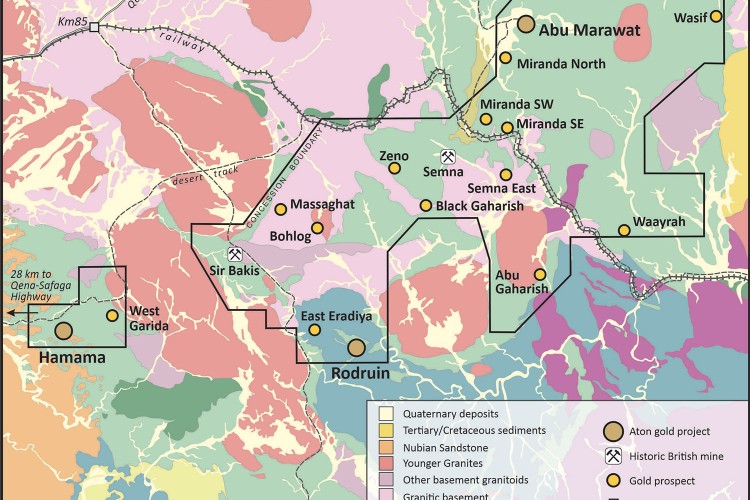 Aton Resources has announced the completion of the Phase 2 diamond drilling program at its advanced Rodruin gold exploration project, located in the  Abu Marawat Concession in the Eastern Desert of Egypt.

The company said that the program was after drilling a total of 9,073 meters from 85 holes.

It added that the final assay results are now expected by February 2023, declaring results for a further 20 holes, ROD-091 to ROD-110, drilled at the Aladdin’s Hill NE, Central Buttress and GF Zones.

On this occasion, Aton Resources’ CEO, Tonno Vahk, expressed his pleasure for completing the project stating “We are pleased to announce that the diamond drilling program has now been successfully completed at Rodruin, with more than two and half times the number of originally planned meters having been drilled. Combined with the extra time on the exploration license that we have been awarded by our partners at the Egyptian Mineral Resource Authority this keeps Aton well on our planned track of completing new and revised mineral resource estimates and delineating “commercial discoveries” at Rodruin and Hamama in mid-2023”

“Our MRE consultants, Cube Consulting, are making good progress with the Hamama West MRE following the completion of the RC program there in August, and once we receive the final assays from the Rodruin drilling programme in early 2023 we expect to move rapidly ahead with the maiden Rodruin MRE. We have also completed a second round of sampling at Rodruin, with the samples expected to be dispatched from Egypt this week for a second phase of metallurgical testwork, and we will also undertake an additional short diamond drill program at Hamama East starting in January. Aton continues to work hand in hand with EMRA, and remains focused on pushing ahead with our strategy to develop the next commercial gold mining operations in Egypt,” said Vahk.