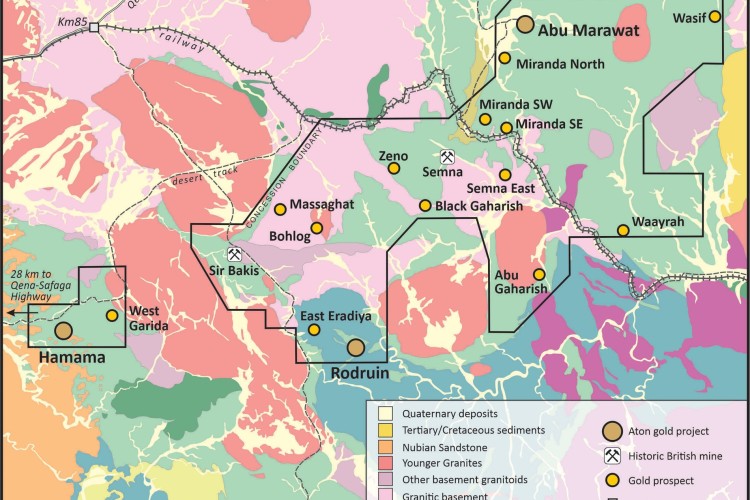 Aton Resources has announced it has encountered gold and minerals during the Phase 2 diamond drilling program at its advanced Rodruin gold exploration project, located in the Abu Marawat Concession in the Eastern Desert of Egypt.

It added that four holes were drilled from a single pad at the eastern edge of the CBZ, and all returned wide intersections of mineralization, including 1.07 g/t Au and 14.5 g/t Ag over 42.25m from surface (ROD-088).

Commenting on these results, Tonno Vahk, Interim CEO said “This latest tranche of drill results continues to show the potential of the Rodruin deposit, as we work towards establishing the maiden mineral resource estimate.”

He noted “Aton’s focus is now very much on moving towards the new mineral resource estimates at both Rodruin and Hamama West, with the diamond drilling continuing at Rodruin, and the RC resource infill programme virtually complete at Hamama. We continue to work hand in hand with our partners at the Egyptian Mineral Resources Authority towards the issuance of the long term mining licence covering both deposit areas, which will give the Company the flexibility to initially mine the oxide resources before moving on to the longer term big prize of developing the deep sulphide resources,”

“We are also continuing to hold fruitful discussions with a number of parties as we look to move this long term strategy forwards, including drilling some of our other exciting regional exploration prospects, and the ongoing identification of excellent grades and thicknesses of mineralisation at surface at Rodruin is just another important step along this road towards the full development of the exploration potential of the Abu Marawat Concession,” Vahk added.