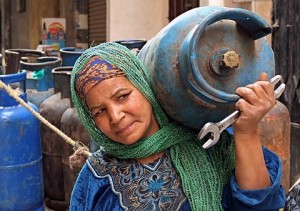 He also revealed that the country’s butane reserves have increased, and can last now for 20 days during a crisis, instead of 10 to 13 days during the previous year. The increase is mainly due to imports, adding that the Abu Rudeis and Shuqayr ports were now receiving butane along with Alexandria and Suez.

Al Shuwaikh said that Abu Rudeis had so far received 35,000 tons, adding that another 35,000 ton shipment was on its way. The Dakhliya port was also on the verge of becoming operational to receive about 30,000 tons of butane in the second half of January.

The maximum capacity that can be received in Alexandria is about 18,000 tons he explained, with new ports entering service reception capabilities have expanded again.

He explained that while his company had faced four winter storms it had not had any adverse effects on the domestic market thanks to strategic butane reserves.

He added that two more winter storms were expected but preparations had already been made, stressing that the LPG distribution market is currently stable and pumping rates are higher than normal.

He noted that his company was executing projects for LPG storage in the provinces of Alexandria and Sohag with the utmost speed, stressing that one of these projects was to become operational by the end of the month.

Egypt produces only about 50% of gross domestic consumption of LPG, with the remaining quantities imported either through global intermediaries or the periodic issuing of tenders.