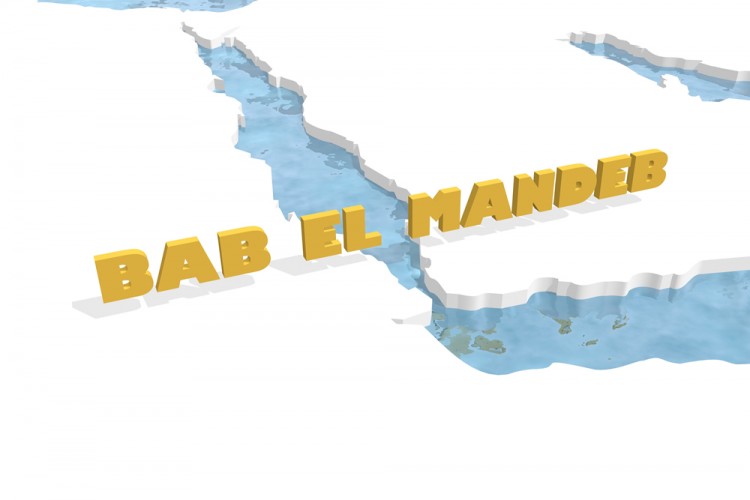 Bab El Mandeb has long been a historical and civilizational chokepoint where the shortest trade routes between Europe, North Africa, India, and East Asia can be controlled—or stopped. However, recent events in Yemen, with Houthi rebels in control of a number of ports along Yemen’s Red Sea coast, and the Arab bombing campaign of Yemen—which Egypt is party to—have made the future of the straights uncertain. According to the U.S. Energy Information Administration, an estimated 3.8 million b/d of crude oil and refined petroleum passed through the Bab El-Mandeb waterway in 2013, making it a critical junction for world trade.

The straights of Bab El-Mandeb officially lie between Yemen and Djibouti, but the area around the straights is made up of Eritrea, Saudi Arabia, and the semi-autonomous republic of Somaliland. This area has long been a crossing point for traders moving between the Mediterranean Sea and Indian Ocean. Pharaonic Egyptian explorers and traders moved between the straights in their quest for incense from the land of Punt. Alexander the Great ordered Greek fleets down the Red Sea through which they reached the Indian Ocean. The Persians, Romans, and Arabs were all present in the straight in antiquity. And ever since the Suez Canal was opened in 1869, and oil—no longer spices—began to flow through the Red Sea, the British, French, Italians, Americans, and Soviets have all fought for its control.

The rapid expansion of Houthi rebel control over large swathes of western Yemen, and their takeover of the Yemeni capital Sana’a in September, has drawn the eye of major regional players with an interest in Yemen’s stability and continued access to the Bab El-Mandeb waterway.

Egypt is one of those players. Because it possesses the Suez Canal, prominent politician Amr Moussa was quoted as saying in the state run Al Ahram newspaper that the Egyptian government decided to join the Saudi-led Arab coalition in attacking the Houthis in order to secure access to the Red Sea routes leading to the canal. Beside that reason, Arab Gulf states’ heavy financial backing of Egypt since the ouster of Hosni Mubarak means that the country must hold up its end of the bargain in any way possible—in this case, military aid to the anti-Houthi coalition. These countries have largely relied on “stopping Iranian expansionism” to justify the bombing campaign against what is frequently called an “Iranian-backed militia.” Yet, while indeed a militia, the background of the Houthis is much more complex than simply an Iranian proxy. So who are the Houthis?

The Houthi movement—named after its founder Hussein Al-Houthi—was founded in 2004 in Yemen’s northern Saada province. Saada has historically been an underdeveloped governorate not fully under government control, and an acute lack of civil services, like water and electricity, has compounded the alienation of the Zaidi sect who predominate the local population. The Houthi movement was originally founded to advocate for greater rights for the Zaidis (as they are a minority in the country) and to provide educational and social services in Saada.

Hussein Al-Houthi was killed in 2004 during an attempt by central government security forces to arrest him, and for the next six years the Houthis fought an on-and-off civil war with the government in Sana’a. After his father died in 2005, Al-Houthi’s son Abdel-Malek took the reigns of the movement, leading the group in a guerrilla campaign fought in the rugged mountains of Saada. The conflict caused the displacement of hundreds of thousands of civilians, but calmed after a ceasefire in 2010.

Since a Gulf Cooperation Council (GCC) sponsored deal that removed Yemeni President Ali Abdullah Saleh from power, replacing him with his former deputy, Abd Rabbu Mansour Hadi, in early 2012, Yemen has not seen the stability it hoped for. This is due to a number of factors, including a continued Al Qaeda presence in large swathes of the country’s south, a collapsing economy, and various political groups frustrated with the lack of results from Yemen’s National Dialogue Conference that was initiated in 2013.

Many analysts and Yemen-watchers see in the Houthi’s lightning advance the hand of former president Saleh, who has many of his close family members in positions of influence inside the Yemeni military and his party, the General People’s Congress. From his house in Sana’a, Saleh—technically retired from politics, and sitting on what some believe to be billions of dollars of wealth—has continued to greet tribal heads and political shakers and movers as though he were still Yemen’s top autocrat. Since he was forced to cede the presidency in 2012, Saleh has tried to hold back the hoped-for transition to democracy under his former deputy-turned president Hadi.

When the Houthis overran Sana’a without much resistance in September, it was apparent to many that Saleh had used his influence in the military to open the door for them and clear Hadi from the presidential seat for a possible comeback. “Ali Abdullah Saleh wants to vanquish his opponents to reemerge as the national leader, and the Houthis have been subcontracted as the means for doing that,” Saeed al-Airi, a member of the Yemeni Islamist party al-Islah, was quoted as saying in the Washington Post.

The Houthi’s success in their recent push to control major urban centers in Yemen is often attributed to the funding, arms, or training their religious co-sectarians in Iran have given them. However, representing the conflict as a mere Sunni-Shiite proxy war between Saudi Arabia and Iran is misleading, and more and more critics have come out explaining that evidence for significant Iranian support for the Houthis is flimsy, if it exists at all.

According to Robert Worth, a researcher at the American think-tank the Wilson Center, much of the perceived Iranian connection to Yemeni affairs originated in 2009, with a media campaign that sought to explain Saudi losses against the upstart movement. Saudi armed forces attacked border regions of northern Yemen controlled by the Houthis in 2009, and their advanced weaponry was beaten back by the humble militia. Iranian media took pains to portray the Houthis at the time as valiant heroes fighting of the oppressive forces of Iran’s arch-rival Saudi Arabia. Yet this was a media parade, with no evidence of concrete Iranian support for the Houthis, and even US State Department cables accessed by Wikileaks showed suspicion of the veracity of the claims of Iranian involvement.

In an interview with the news outlet Al Monitor, a former Iranian diplomat noted that Saudi Arabia has intentionally exaggerated Iranian involvement in the Yemen crisis as the country seeks to counter growing Iranian influence on other fronts in the Middle East. Notably, the former diplomat said, “The possibly most painful development for Riyadh is the forthcoming thaw in US-Iran ties, and the potential of losing a long time protector.”

As for Egypt’s role in the current offensive against the Houthis, David Butter, a researcher at the London-based think tank Chatham House who specializes in Egyptian-Saudi relations, said, “My interpretation is that if you take Saudi’s interests out of the equation, would Egyptian military intervention [in the anti-Houthi coalition] be involved? I think not.”

Despite the recent claims by some Egyptian public figures that Egypt is involving itself in the anti-Houthi coalition to protect access to the Bab El Mandeb straights, and by extension shipping in the Suez Canal, Butter believes that the Houthi militias pose little actual threat to Red Sea trade.

“Do the Houthis mean to attack Egyptian national interests in the Suez Canal?” Butter thinks otherwise. “If so, they are aware that an international coalition would come down on them in punishment.”

Even if Houthi fighters were in total control of the Yemeni side of the Bab El-Mandeb strait, Butter pointed out that the practicality of closing down the waterway completely to shipping is out of reach of the militia.

He alluded to frequent fears expressed in international discourse during times of heightened tension about the possibility of Iran closing the Persian Gulf’s Strait of Hormuz to shipping. Despite this, however, Butter noted that “Iran has a much more capable military [than Yemen’s Houthis], but still no closure has occurred.”

Instead, Butter thinks that Saudi Arabia, which looks upon Yemen as an integral part of its national policy, has found itself less able to control Yemen’s internal politics through diplomacy and manipulation of Yemeni tribal figures. He noted that the death of Saudi Arabia’s crown Prince Sultan bin Abdulaziz in 2011, who managed the kingdom’s Yemen relations for decades and was closely familiar with Yemeni tribal politics, has diminished this control. “Lever pulling behind the scenes [lately] has had no effect,” Butter said. “So Saudi Arabia feels it needs to go about this in a more determined manner.”

Enlisting Egypt’s military, the Arab World’s largest armed force, is part of the new Saudi strategy. Yet despite committing naval forces to the blockade of Yemeni ports like Aden on the Arabian Sea and air forces to the bombardment of Houthi positions, Butter says that Egypt will likely be wary of contributing significant numbers of ground forces. The lesson, he says, lies in Egyptian President Gamal Abdel Nasser’s military expedition to Yemen between 1962 and 1967. The expedition sought to export Egypt’s republican revolution to Yemen, where military officers battled the ruling Imam of Yemen and his Zaidi supporters in the north, yet quickly found themselves bogged down in a guerrilla war that cost money, lives, and Egyptian prestige. The new Egyptian President Abdel Fattah El-Sisi is well aware of the risks should he send in ground forces too soon.

Yet, Egypt’s complicated relationship with its Saudi backer may force its hand. As Operation Decisive Storm drags on, and the Houthis hang on battered, but not defeated, Saudi Arabia may demand that its allies in the coalition commit boots on the ground. Egypt might bend to the kingdom’s pressure out of fear of the suspension of the billions of dollars of Saudi aid that has propped up the Egyptian economy over the last four years of turmoil. With the coalition attack on the Houthis demanding ever more force, will cautious involvement on Egypt’s part keep it from losing lives and face in the Yemeni quagmire? “In theory, yes,” said Butter. “But in practice, extracting forces from Yemen will prove much more tricky.”