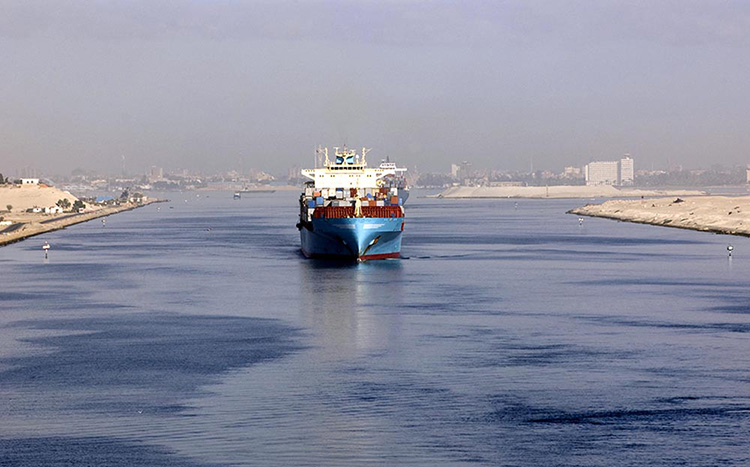 International organizations have declared 2020 as one of the worst years for the world economy. The COVID-19 consequences were to blame for the economic damage that left only a handful of countries to come on top with little economic damage by the end of the year. Trade, being one of the main driving forces of the economy, was not able to escape a hit over the past year too. As some parts of the world begin their way to recover, health-wise and consequently, economic-wise, Egypt Oil and Gas (EOG) takes a look back on what 2020 has brought on the global and national trade through the lens of the Suez Canal; one of the most vital links connecting the world economy.

Riding out the Storm

According to the United Nations Conference on Trade and Development (UNCTAD) report on COVID-19 Impact on Trade and Development, in the first 31 weeks of 2020, global port calls by all ship types were down by more than 10% compared to the same period in 2019. Not only that but during the second half of May 2020, global port calls had fallen even to less than 80% of calls for the same period during the previous year. However, on a more focused note, for Egypt, where the Suez Canal is one of the main sources of national income, the strategic waterway has shown some light amid the sunken period of global trade.

Throughout 2020 and with all its hassle, one would have expected that the Suez Canal would be hit as hard as other sectors such as tourism or the foodservice industry. However, given the latest figures released by the Suez Canal Authority (SCA), it appears that the Suez Canal’s traffic recorded 18,829 vessels in 2020 compared to 18,880 in the previous year, indicating a decrease of a mere 0.27%. Despite the tumbling global economy, the Canal has managed to generate revenues of $5.61 billion, the third-highest annual revenue in the history of the canal.

Zoning in on how the Suez Canal’s petroleum trade played out in 2020, based on SCA’s data, out of the 18,829 vessels, 686 were liquefied natural gas (LNG) carriers against 750 LNG tankers in 2019. Per the SCA, this can’t be taken lightly especially amid the decline in spot gas trade to Asian countries and in light of the decline in natural gas prices. As for oil tankers and despite the decline in global demand for petroleum products, SCA’s data shows that 5,006 oil tankers crossed the Suez Canal during 2020.

Keeping up with Tumbling Prices

The small discrepancies between the last year’s figures and 2019 could be considered remarkable in such circumstances. The SCA has taken bold moves to ensure the smooth continuation of the trade. Most notably, offering several discounts on tariffs to some vessels which included a discount of 24% to liquefied petroleum gas (LPG) carriers from West of India ports and the Gulf Coast of the US and 60% off to LPG tankers crossing from East of Kochi ports to Singapore. The SCA also offered a discount of 75% on all oil tankers cruising between Latin America from Colombia and ports of Asia from Karachi and its Eastern parts. The discounts were supposed to be valid until the end of 2020, however, the SCA extended the same discounts until June 31, 2021.

Such discounts were made in an effort to lure more ships back to the Canal after lower fuel prices have made ships take the longer route of Cape of Good Hope when traveling. Between April and May 2020, the French container transportation and shipping company, CMA-CGM, and the 2M Alliance – which is an alliance between Maersk Line and Mediterranean Shipping Company (MSC) – switched their transport route from the Suez Canal to the Cape of Good Hope. George Safwat, Spokesperson of the SCA, stated that only three vessels switched their routes and that it was coordinated with the SCA beforehand.

Safwat explained to the BBC that this shift was a result of the global economy being affected by the repercussions of COVID-19 as well as the fallout of the price of oil per barrel. In his own words, Safwat elaborated that this “made the cost of the journey through the longest routes much less than the cost of crossing the Suez Canal.” Meaning that transport companies are ready to bear the fuel price increase despite late delivery. It should be noted that the Cape of Good Hope adds 3,000 miles more than the Suez Canal.

This is not the only change in the trade scenery as talks on reviving the Eilat-Ashkelon pipeline connecting the Red Sea to the Mediterranean have been ongoing. If the pipeline becomes active, it will be used to ship oil from the Gulf to Europe, thus bypassing the Suez Canal.  Osama Rabie, Head of the SCA, stated that this could have a damaging effect on the canal’s revenues, which consequently could pose a threat to Egypt’s finances and economy. That is because the canal’s revenues are the third source of Egypt’s foreign currency after remittances and tourism. The pipeline, however, does not pose a real threat to Egypt at the moment, Rabie previously stated.

Amidst all these challenges, the Suez Canal will always be an important asset for trade especially since its expansion to allow the shortest shipping two-route way between Europe and Asia. With the new expansion, the state aims to further reduce the transit time of vessels crossing the Suez Canal from one end to the other and increase its capacity in anticipation of the expected growth in world trade. Consequently, it does not only benefit world trade but the national economy as well. Mohab Mamish, Former Chairman of the SCA, previously elaborated on that angle indicating that “the new waterway would increase annual profits from the Suez Canal from $5.3 billion in 2014 to $13.23 billion by 2023.”

The new expansion gives its competitors a run for their money by allowing more vessels into the canal at a favorable cost and time. Thus, it is evident that as a commercial landmark, the Suez Canal will always be a guiding lighthouse to world trade.