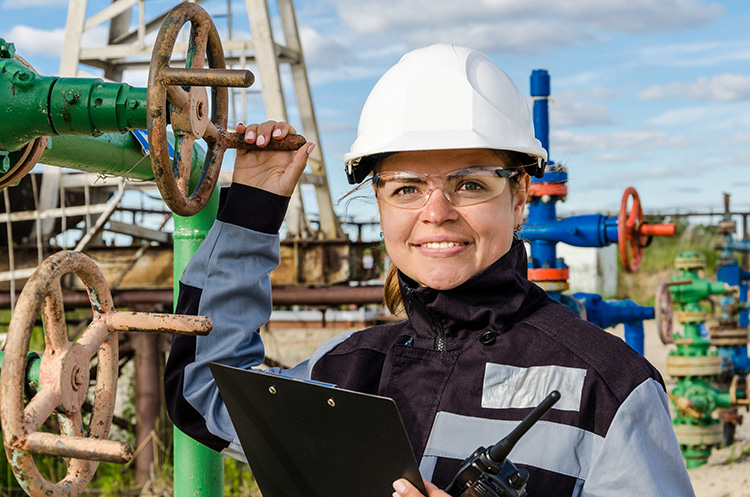 The petroleum industry is widely known for being dominated by men, especially upstream fieldwork. Whether the field is located in the middle of the desert or in the middle of the Mediterranean, on-site workers have to spend weeks working for long shifts under difficult conditions.

Some people, including petroleum engineers themselves, believe that only men can handle such conditions; however, looking closer into the industry, there are women who broke this stereotype, many of which have been working in the field for decades.

Scarcity of women working on rigs is not exclusive in Egypt. Yassmin Abdel Magied, Sudanese born and Australian bred Petroleum Engineer, often shares her experience working on rigs on social media. Abdel Magied, who is currently a writer and a TV presenter, explained that sometimes she was the only woman among around 30 men and maybe another woman but not more than one.

In offshore activities, the men to women ratio is even lower with around four women to 150 men, Abdel Magied told the Guardian. In general, her writings highlight how much she enjoys working on rigs as well as her appreciation of the whole experience both on the personal and professional level. Yet, she refers to the comments she receives from some workmates doubting her abilities because she is a woman.

Shifting focus to Egypt, and in efforts to qualitatively address the experience of women working in the field, Egypt Oil & Gas spoke to several women field engineers, from different age groups and at different stages in their career paths.

Beginning with Marwa Borais, General Manager of Advanced Petroleum Investment (API), with 18 years of experience in oil fields. “I was three years old when my father established his company. I spent my childhood playing in sites and moving from a site to another,” she said.

Borais shadowed her father when she was in college and started her career right after graduation in 2005. She worked on rigs at different places including Sinai, Eastern Desert, Red Sea, and Gulf of Suez, West to Western Desert, Delta, South Sudan, and Kuwait.

“I am usually consulted in drilling by many organizations including the Armed Forces Engineering Authority. I even give drilling training for military officers,” she explained. Now she is the owner of Petroleum Investment Companies. “I’m the only Arab Egyptian woman who owns a company specialized in drilling, starting from the most sophisticated to the simplest drilling techniques,” she affirmed.

Another example of female petroleum engineers working in sites is Maureen Amir, Sub-sea Engineer at British Petroleum (BP). She has been working on rigs since January 2017. Amir graduated from Faculty of Petroleum Engineering at the American University in Cairo (AUC) in 2013, and received her master’s degree in industrial engineering in 2017 from AUC as well.

Amir was hesitant to work on rigs; however, this has changed afterwards. “I was scared but I told myself that this is my industry. I have been trying to find another job at other industries for three years and it didn’t work, so let’s try it,” she explained.

Amir highlighted the fact that other women worked on the same site eased the process at the beginning. “People there are always willing to teach me how things work step by step,” she said. Admitting that working on rigs might be challenging sometimes, yet it helped her develop. “Some people challenge us until we fail, but in my current job they challenge me to succeed,” she added.

Borais had a different experience during her first years of working in the field back in 2000. “People at sites weren’t listening to me. They didn’t trust my abilities. They saw me as a young girl, not an engineer. I used to talk to my father and cry. He told me ‘you either prove them wrong or stay at home cooking.’ I endured and worked [hard] and now [I sit with] high-profile government officials,” she said proudly.

Now, 18 years later, young female engineers still go through similar experiences. AlShimaa Ibrahim, Senior Petroleum Engineering student at Suez University, faced some challenges as well when she did an internship in a field in The Gulf of Suez. “Some supervisors didn’t want to let me go on the rig. They kept telling me ‘your presence is causing troubles because you are a girl’. But at the same time some other supervisors helped me and taught me a lot,” Ibrahim said. Field training is a prerequisite for graduation at all petroleum engineering schools in Egypt, not allowing women on the rig can hinder their career development, she explained.

Nadine El Tanahy, Senior Petroleum Engineering student at AUC, echoed Ibrahim saying that female engineers are sometimes not given the permission to get into some areas of the field, adding that “some companies state explicitly that they don’t want women on their rig.”  El Tanahy completed two office based internships which she found beneficial. She went once to the field for one day which she described it as “the most useful experience.”

Borais participates in giving those trainings to undergraduates in government-owned companies and she noticed that she has never seen female students attending the training. “I don’t know why. Maybe the management doesn’t allow them. Maybe the girls just give up on their right [to do the internship] or maybe their families just want them to work in offices, or it could be a policy. I believe it is most probably the policies,” she explained.

As a company owner, she said that it is not an easy decision for her to appoint female engineers to work roughneck. “I always support women to go through this experience but sometimes it happens that I give some female engineers the opportunity to work in such positions and then they find it overwhelming or too rough for them,” she commented.

“I believe that women can do anything. If you are well educated and experienced practically, you can succeed at anything. At the end of the day we are not living in a jungle. If a woman is self-confident, it is really difficult for anyone to hinder her chances working on sites,” Borais stressed.

Amir, as well, enjoyed her experience of working on rigs. “A year ago I wasn’t the same person […] I’m really grateful for this experience, actually it had helped me grow a lot in only one year,” she said.

Supporting the same opinion, Ibrahim explains: “It is like any other life experience. You will always find some people supporting you and others discouraging you. The point is how you perceive this. Discoursing people should motivate you to succeed while supporting people are a god’s blessing to actually help you succeed.”

Shifting to social challenges, the fact that the petroleum industry is male dominant makes every step toward working in this field a challenge starting from the mere idea of studying petroleum engineering. As someone who was raised in the fields, Borais didn’t think twice before studying petroleum engineering and pursue her postgraduate studies and career in this field; nonetheless, this wasn’t welcomed by her extended family.

Despite the fact that she descends from a family of petroleum engineers, her decision to work with her father was rejected by her extended family. “There was a strong conflict between my  father and my extended family when I started working with him. My family kept telling him how come you take your girl to the field and the rig? She can work in the office but not the rig,” she added. Those words changed nothing about her father’s position as a strong believer in her abilities.

Unlike Borais, Amir faced complete support from her family’s side when she decided to join petroleum engineering school and when she started her job that required her to work on rigs for at least two weeks per month.

For Amir, those two decisions represented challenges for herself and for social norms. “Everyone was telling me ‘this is a man’s’ major. Don’t join that major, don’t join this industry,” she said.

“I declared Petroleum Engineering major but I have never thought that I will actually go on a rig,” Amir explained. She believes that the society is yet to be ready to accept women in this job. To highlight her point she recalled an experience with an Uber driver, who was shocked to discover that she was a field engineer. She recalls his reply: “This is crazy and who am I to prove myself in a field like this […] It was extremely offensive.”

Recalling her story, El Tanahy faced more resistance from her family, when she decided to study petroleum engineering. First, she joined school of medicine as almost all of her family members are physicians, switching to petroleum engineering after the first semester. “It wasn’t an easy decision. Not at all. I faced a lot of resistance even from family members who work in this field who I had thought that they would support me. It took some time to convince them,” she said.

Her decision to study petroleum engineering was due to her disinterest in studying medicine, she wanted to study something more challenging, and of brighter future. On the other hand, her family wanted her to study something more suitable for a woman. “They were telling me ‘do you think you will be able to stay on the rig for months?” she added.

Ibrahim’s story was different. Her family supported her to go after what she likes; nonetheless, she was scared of being the only girl in her class studying petroleum engineering. “There are very few girls studying at my college, in general, and most of them specialize in metallurgy. I’m the only girl at the petroleum engineering department. Professors and teacher assistants always ask me why I’m studying this specialization,” she explained.

Asking Ibrahim about working in the field, she explained that she does not mind working on site for a while, but not adopting this lifestyle for the rest of her life. “At the end of the day I’m a woman and I want to have a family. I expect it to be difficult for me to work on site after marriage. At the same time, I don’t want to be restricted by working in an office. I want to explore field activities,” she elucidates.

As for El Tanahy, convincing her family to let her work on rigs will not be an easy job. “I am expecting strong resistance from my family, from my fiancé if I decided to work in the field,” she explained.

Borais and Amir disagree with Ibrahim and El Tanahy, as they believe working in the field doesn’t impact women’s ability to successfully have their own family. “I have four sons […] The eldest is in high school and the three others are in middle and elementary schools. My work has never affected my family. My job is likewise any other job that requires the person to be away from home such as physicians or flight attendants,” Borais said. As time goes by, site workers become able to manage their own working schedule and see what fits them and their family commitments, she added further noting that most people stress on the importance of family commitments for women but she believes that building career is as important as family and women should balance between both, not only focus on one of them.

Egyptian women in the field proved that there isn’t a glass ceiling in Egypt’s oil and gas industry, nor is there an industry just for men. They proved that hard working, determination, and quality education are the main factors determining career development, despite of gender roles and social norms.