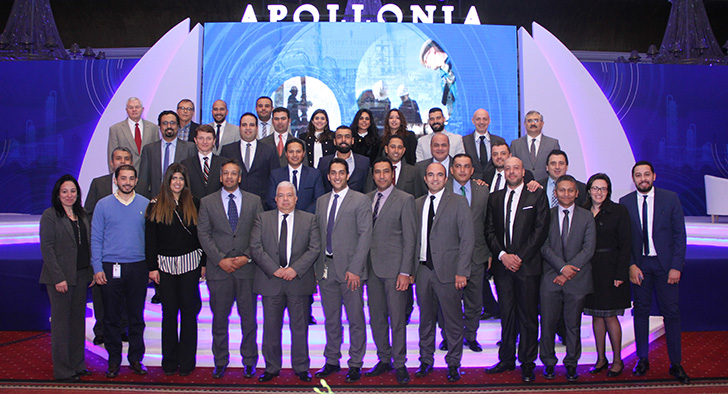 The Egyptian petroleum industry is poised to enter a new era as drilling operations in unconventional fields started to take place. On Monday, February 6th 2017, Schlumberger in collaboration with Khalda Petroleum Company held Apollonia Field Presentation in Cairo’s JW Marriot, to showcase the success of the unconventional completion operation of the Apollonia JD gas field.

Schlumberger along with the field operators; EGPC, Apache, Shell, Khalda, and Bapetco took a massive step towards the start of extracting gas from an unconventional resource, boosting the status of the Egyptian industry in the global energy market.

Apollonia formation forms a reasonable reservoir size spreading over an area of several hundred kilometers and it is characterized as a carbonate reservoir that consists mainly of high-porosity soft chalky and low permeability limestone. Commercial discovery of the Apollonia formation in the JD field was in 2008 by Shell, with first gas from vertical wells in 2012.Production of the tight-gas Apollonia formation from the fractured vertical wells was uneconomical which trigged the idea of designing a pilot aimed at applying the existing North America tight-gas technology in Egypt with an objective to economically develop the difficult gas from the unconventional Apollonia play. The pilot phase agreement was concluded in late 2014 with the joint commitment of the partners to carry out further drilling activities in the field as Egypt strives to meet the local demand on gas.

The Birth of Unconventional Drilling

Production of oil and gas from unconventional resources bears within geophysical and cost challenges, introducing a novel approach to the Egyptian industry and supports the view that the investment environment is becoming safer following a period of economic downturn. Apollonia JD field marks the birth of the Egyptian unconventional extraction from tight reservoirs using untraditional methods in order to push gas out of the deep layers in the Egyptian desert. In this sense, Abd El Aziem explained that Egypt has been encouraged to explore its unconventional resources in the footsteps of key industries, saying: “the economic success in North America that brought that part of unconventional resources to the fore front of the discussions of the energy future; this has a huge influence in raising the interest in the development of our challenging resources such as Apollonia Tight Reservoir.” From this point, the Egyptian government and the foreign operators started to consider the deeply buried oil and gas resources that cannot be reached using easy drilling techniques.

Furthermore, Regional Technical Sales Manager at Schlumberger, Ahmad Kamar, explained how the companies used Egyptian talents in the Apollonia Reservoir. Kamar said: “we started this project, barely when we heard about the whole idea, by introducing a new theme into the Egypt technical team which is a technology integrated group and we brought a technical expert assimilated in technical domain who has a lot of experience in unconventional work so he can start building a team using our Egyptian experts in several technical lines.”

Schlumberger has mastered the project, overriding many miles by including consultation capacities into the implementation of the project. In order to not “start from scratch” Kamar explained: “we consulted the Schlumberger global technology integrated group, and we had a lot of meetings with them, a lot of advice about the latest experience in this field.” The operators held several meetings to agree on the way to execute and run the project. Furthermore, Kamar said: “We started by gathering the data, building additional models and then using additional logs.”The companies have conducted “production simulation” to “put an expectation about how this well should behave.” The partners decided to “put in perspective all these studies” in order to “decide where the best place to frac is”

It’s widely acknowledged that drilling operations, particularly in unconventional fields, could involve damage to the environment, however, the Apollonia Tight Reservoir came with the least harmful effects. Indeed, the project is designed on an environment-friendly basis, taking into consideration the environmental risks that may emerge. Ahmad Kamar, explained that “instead of putting the amount of sand into non-productive zones, we made sure to target productive zones, and of course this will be followed by production history matching every month, to have enough data and to enhance the program.” He added that the process followed in the Apollonia project “saved about 15% of the time and 15% of the total fluid used, so it is not just saving time, but saving our environment.”

Kamar explained that the objective of the Apollonia project is “to increase the production by increasing the wellbore coverage as well as reservoir contact to increase reserve and confirm development plans.” Thus, having strategic plans will eventually result into strategic outcomes.

The project does not have any negative effects on the population due to its location in the desert.  During the drilling operations, partners ensured noise reduction and worked on having control over liquid. This is in addition to enhancing efficiency of the overall performance of the operations.

Moving ahead of schedule, the Apollonia project is eyeing a remarkable technical success, as noted by Kamar, adding: “this success can only be done with integration.” The cooperative spirit demonstrated by the partners largely contributed into the success of the project. On his side, Vice President of Production at the Egyptian Natural Gas Holding Company (EGAS), Abed Ezz El Regal, stated: “We have proven technical success, so the next step is to prove it commercially as well.”

Egypt has a vision to be an energy regional hub, of which Schlumberger is “striving with [its] partners to achieve it. ”Schlumberger’s General Manager and Vice President, Hussein Fouad El Ghazzawy, said. As the country has embarked upon a strategy to retain a position on the gas chessboard with the increase in demand, the Apollonia Tight Reservoir could play a key role in boosting the Egyptian natural gas production. Khalda Petroleum Company’s CEO, Mohamed Abd El Aziem, said that “the economic production from the unconventional reservoirs is a great challenge in our quest to maintain production annually.” This will not only affect the Egyptian local market and help in meeting its demand, but also it will help in rationalizing the natural gas importing bills, which, in turn, will bolster the industry and the economy as a whole.