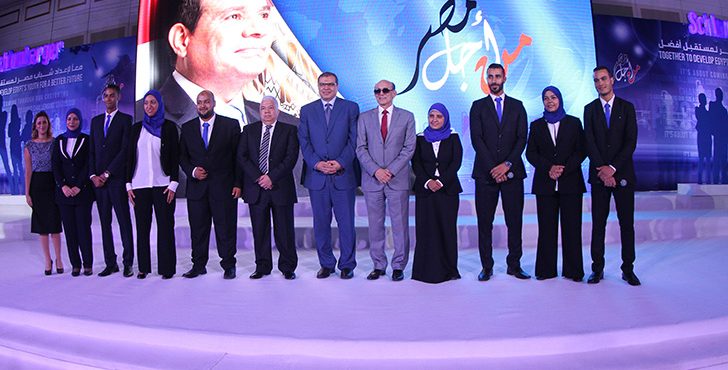 In efforts to contribute to the enhancement of the local economic welfare, Schlumberger Egypt provided a training program to 100 young technicians, as a part of the protocol signed with the Ministry of Man Power to train youth on the market’s needs.

Commenced in March 2017, the program included 100 trainees, 87 of which graduated through the different training phases.

“This celebration is a mark that we have taken the first step in the cooperation protocol with the Ministry of Manpower, which was signed in the presence of the Egyptian Prime Minister,” El Ghazzawy highlighted.

Women represented 30% of the trainees in the program. The young trainees challenged themselves into a difficult industry and won the challenge. “The idea of a girl working in the oil and gas field and working with her own hands is not found in other training programs, so getting trained on rigs made me really happy,” Naglaa Mahmoud, one of the training graduates, told Egypt Oil & Gas.

Commenting on the successful implementation of the program El Ghazawy told Egypt Oil & Gas, “on a scale from one to seven, the success of this batch was a seven. Yet, they exceeded our expectation and I am very happy and very proud of them. The trainees are very good, keen, and enthusiastic.”

The program included sessions on soft skills that would enable trainees to lead their own career path in future as Amina Attia Mohamed, one of the graduates, noted, “We [the graduates] have learned many things, first was commitment and how to manage time. Then, we learned how to write a CV, how to have an interview with a company, how to dress. We learned computer skills, like how to use word, power point and excel. We learned how to work on a project and how to work in a team. We applied that in the company’s sites as there was no one working on hisher own in order to ensure the value.”

Furthermore, the trainees were taught about risk mitigation and quality, health, safety, and environmental (QHSE) standards. “We have taken a course, titled (NEST – New Employee Safety Training, & SIPP – Schlumberger Injury Prevention Program), in the company. We did not have a background before about safety,” Mahmoud Karim Eissa, a program graduate, explained adding, “we learned how to secure our safety while working on rigs in the fields, and how to deal with risks. The Safety First course assured us and taught us how to prevent risks before happening.”

“The trainees showed good response during the training and proved to be a successful batch,” Senior Training Officer at Education for Employment (EFE), Noura Abou El Seoud, told Egypt Oil & Gas. She further added “the trainees were very excited and happy about the new experiment, but they didn’t know what will happen to them; they had a lot of questions.” Abou El Seoud explained that after the first two weeks, when the trainees experienced the training process, they became more eager to know everything related to the topics addressed; “they were very enthusiastic and the team work was perfect. These trainees were a very different and successful group,” she explained.

During the ceremony, Islam Gamal, one of the training’s graduates, told the attendees a real life example about the dream of travelling abroad, which haunted him; and how after the training this has changed. He explained that now he wants to succeed in Egypt and to benefit from the experience he got from the training and obtain new experience to help him climb his career ladder.

The Schlumberger training is going in line with Actor, Mohamed Sobhy’s campaig ‘Etesel Eshta3’al’, which translates to call us and start working. Sobhy highlighted during his speech that he is very proud of the program and looking forward to the increase of the number of trainees in the future.

The trainees prepared very creative graduations projects of which only three were presented during the ceremony. “During the four months training, we were all [waiting] to see the results, but before that we were [preparing] a good training model to help us have good technician employees who are well prepared to represent us anywhere inside or outside Egypt,” Minister of Manpower, Mohamed Saafan said, adding that “the first batch is a gift from the ministry and Schlumberger to Egypt.”

The first graduation project was about a virtual company, named New Vision Construction. The project featured included building 3D Panels to be used instead of normal building methods, which include heavy bricks. The vision of the project is to be a leading marketplace building company, while the mission is to ensure lower cost, less time and more efficiency.

The second graduation project introduced a virtual company, dubbed Rethink Recycling Company. The project is meant to recycle waste to produce methane and biofuel. The vision of the project is to make Egyptian roads clean and save the environment. The graduates introduced their plans of waste collection, production, and selling the produced fuel.

The trainees achieved a great success, and Schlumberger’s Education Services Training Center Manager, Heba Abaza, commented that she was “fascinated by the graduation projects and knew how Egypt’s youth are creative, & all they needed was for their talents to be developed & channeled accurately & efficiently.”

The training program offers a future for the trainees and a chance for success. El Ghazzawy mentioned during the ceremony that Schlumberger is hiring ten graduates who officially started work end of July, he further added that an exploration and production (E&P) company, wants to hire five of the graduates.

“The graduates will not just find a future in the petroleum industry, but they can invade other sectors as well,” El Ghazzawy told Egypt oil & Gas adding that he spoke on the sidelines of the event with a representative for one of the carpet producing companies, “[who] asked [Schlumberger] to recommend a number of graduates for his company.”

The training will still have a future full of development as El Ghazzawy highlighted, one notable example would be Petrojet’s agreement to open their workshops for trainees. Furthermore, Schlumberger is working on securing an arrangement with Oil and Gas Skills Company (OGS) for the use of simulator. The training projects will allow the company to train more [people] as the [training] atmosphere is encouraging everyone to help,” El Ghazzawy told Egypt Oil & Gas.

After the success of Schlumberger’s initial program, the company is keen on increasing the number of trainees to 200, especially after opening Schlumberger’s training center and as many companies are eager to help, according to El Ghazzawy.

The success of the training inspired several firms to help and to hire the graduates. It also inspired the youth to look forward to their future and seek their own development. Graduate, Islam Gamal sent a massage for Egyptian youth saying “work will not find you, seek work and knowledge.”

“The Ministry of Petroleum is very proud of the young technicians training,” The First Undersecretary of the Ministry of Petroleum and Mineral Resources, Mohamed Moanes, told Egypt Oil & Gas, adding “the training is a good step towards benefiting from the youth’s energy. Egypt will never prosper without its youth, and the whole country is moving in the same direction.”