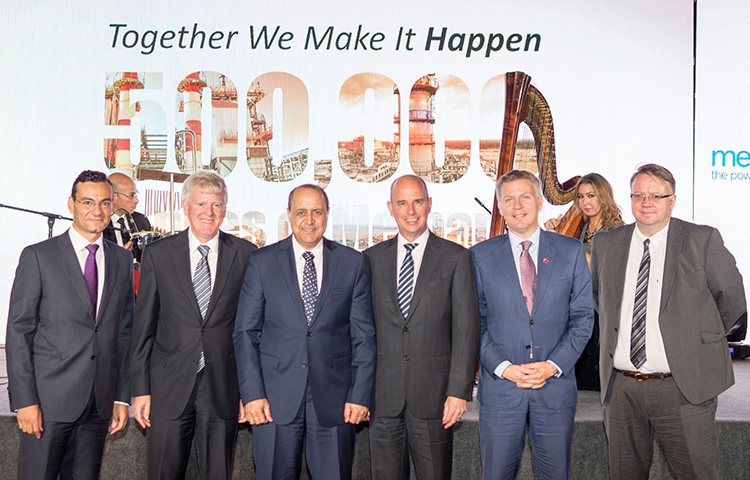 When Methanex Egypt started production from its state-of-the-art facility in Damietta almost 10 years ago, the Egyptian domestic methanol market depended solely on imported product to feed the growing demand for methanol, an essential ingredient used to produce hundreds of everyday industrial and consumer items.

Today, through a partnership with Egypt’s Petrochemicals Holding Company ECHEM, Methanex, the global leader in methanol production, the world’s largest producer and supplier of methanol to major international markets in North America, Asia Pacific, Europe and South America, has successfully satiated the market with locally produced methanol, dispensing with the need for imports, and supporting HE the Minister of Petroleum and Mineral Resources Eng. Tarek El-Molla’s own vision for enriching the value of the country’s resources through a robust and interdependent chain of value-adding industries.

In addition to the successful JV partnership between ECHEM and Methanex, ECHEM is also the sole marketer of methanol produced by the company. Egypt Oil and Gas sat with Ahmed Saad Kamel, Assistant General Manager, ECHEM, who leads the team responsible for delivering the domestic methanol sales plan. According to Kamel, the goal of ECHEM is to “satisfy the local market demand from methanol to produce related downstream products such as urea-formaldehyde, solvents, coatings, and other applications that use methanol as a feedstock. Also, replacing imported methanol with locally produced with the same specifications and quality and accordingly decreasing pressures on the foreign currency used for importing.”

The local market currently consumes up to 15% of Methanex’s Egypt total production. In addition, ECHEM is building a methanol derivatives plant next to Methanex’s plant in Damietta, a direct realization of HE the Minister’s vision for the petrochemicals’ sector. “The methanol production process in the petrochemical industry is based on using natural gas as a feedstock, which adds value to our natural resources. The government’s vision/goal also aims to establish high-tech projects with the global leaders in each industry to add other values through technology and experience transfer. Methanex is an example of such global leaders,” Kamel explains.

According to Kamel, the current success of the methanol sales team comes after years of diligent work, growing trust between partners and the overcoming of a number of challenges. “Methanol local sales started in July 2011 with a small monthly quantity because most of the local consumers of methanol were committed to annual importing contracts with other producers” he explains. The challenges also included two revolutions and gas supply challenges, but these problems were soon overcome, opening the way to a stronger partnership and a robust, growing, healthy domestic market.

This is also owed to the creativity of the methanol marketing team. Kamel explains:

“ In July 2017 ECHEM started a “loyalty program” to motivate major players in the local market and also give the locally produced methanol a competitive edge,” he says. As a result, in 2018 Methanex and ECHEM celebrated the achievement of 500,000 tonnes of local sales. The occasion was celebrated during the visit of John Floren, Methanex Corporation CEO, and attended by ECHEM and Methanex leadership and key stakeholders in the country. One of the main highlights of the event was the celebration of the ongoing successful collaboration with the country’s top methanol buyers, including Sprea, MRI, Al Mohandes, Life Chemicals, Africa, Al Alamiya and Rawan, in addition to SGS. ECHEM and Methanex in Egypt acknowledged the customers’ loyalty, presenting them with awards in recognition of safe lifting, distribution and delivery.

A clear example that highlights Methanex’s support for the domestic market can be seen in Methanex Egypt’s MoU with Suez for Methanol Derivatives (SMD). Signed in 2018, the MoU enables future cooperation between the two companies, whereby Methanex Egypt would supply SMD with methanol feedstock for the production of formaldehyde products.

Furthermore, Methanex Egypt will be supplying the project with the needed methanol as part of its continuous contribution and support to the Egyptian economy and the Petrochemicals sector, in alignment with its strategy that aims to create a more robust and informed local market for methanol.

Continuing to Support the Market in 2020 and beyond

The partnership between ECHEM and Methanex has gone from strength to strength, with 2020 turning out to be a particularly successful year for the partnership. It has endlessly benefitted the sector with some of the highlights including:

This year represents the first year to fulfill 100% of the local market needs since loading began in 2011. The new highest monthly sales volume was set during August 2020 with about 16,700 tons sold. Another welcome new record is of the daily loaded quantity of 588 tons for 15 trucks. Also, the annual quantity for 2020 reached new record levels with more than 150,000 metric tons loaded safely and successfully.

Methanex also partners with ECHEM in the field of health, safety, and environmental (HSE) protection, termed Responsible Care within the petrochemicals industry. A key pillar of Responsible Care (RC) is Product Stewardship, through which Methanex strives to maintain the highest safety standards, protect the environment and share methanol safe-handling knowledge with all stakeholders in the supply chain and beyond. These stakeholders include methanol consumers and their downstream end-users, emergency responders, industry associations and government partners.

In Egypt, methanol destined to the domestic buyers is lifted in trucks. Following careful protocol, every truck undergoes the necessary inspections in order to ensure that the loading of methanol is safe and organized. With the help of Methanex, more than 20,000 safe trips by large trucks transported methanol to many destinations over the Egyptian roads; new truck convoys were added to the Egyptian market applying the highest safety standards, and run by highly trained drivers who are prepared to handle with dangerous chemicals and deal with accidents if occurred.

Methanex’s enduring commitment to HSE in Egypt can be epitomized by Methanex’s signing of a Memorandum of Understanding (MoU) with the Ministry of Petroleum and Mineral Resources, to promote process safety management (PSM) within the Egyptian oil and gas sector. PSM is a set of interrelated principles to managing the hazards associated with process industries and is designed to reduce the frequency and potential severity of process incidents that could result from the accidental release of hazardous fluids (oil, gases, chemicals) and other energy sources. To help spread awareness, in 2018 and 2019 Methanex Egypt and ECHEM sponsored the first PSM conference which included key international PSM speakers and was attended by hundreds of leaders and executives of the petrochemicals and downstream oil & gas industry in Egypt. This proactive approach demonstrates Methanex Egypt’s commitment to Egypt and the ministry’s 2030 modernization vision.

Product Stewardship was of particular importance during 2020 in view of the current pandemic, as Methanex adapted its operations to ensure protection against the virus.

An example of how Methanex adapted their operations to overcome the challenges that COVID-19 presented was during the shipping and trucking processes: all agreements are now done remotely and during the loading arm connection, team members wear disposable PPEs and alternate on the tanker with the crew to maintain social distancing, limit the number of people on the tanker and prevent face to face meetings with non-Methanex teams. For truck loading, drivers get a daily checkup, and disinfection takes place for each truck. Several arrangements are done with ECHEM to ensure truck deliveries meet the curfew timings (if in place).

However, a testament to the adaptability of Methanex is that despite the coronavirus outbreak and the new work mitigations, the operations team successfully achieved a new truck loading record of 16,699 megatonnes (MT) during August, the highest monthly record in 2020 compared to 16,277 MT in July 2020.

In terms of production during coronavirus, Methanex played a vital role to ensure that all the domestic needs were met during the pandemic. During the lockdown, one saw a significant increase in demand for agricultural products, meaning an increase in the need for Ureaformaldhyde. These demands were met by Methanex without compromise.

Methanex, in cooperation with ECHEM, places a strong emphasis on customer relations. At the end of 2019, they held a customer’s day to share updates and market outlook, which enhanced the relationship between the customers, Methanex, and ECHEM. Recalling the event, Kamel said: “One of the main highlights of the event was the celebration of the ongoing successful collaboration with the country’s top methanol buyers, including Sprea, MRI, Al-Mohandes, Life Chemicals, Africa, ACPA, Al-Alamiya and Rawan.”

What does the future hold?

According to Kamel, the future partnership between Methanex and ECHEM looks bright. With regard to the domestic methanol market, Kamal points to the perpetual growth of the sector since its inception and also the significant sum of investments poured into the sector to help develop new plants with methanol as a feedstock. More importantly, Kamal believes that “with ECHEM and Methanex in partnership, we will be ready to fulfill any additional quantities needed by the local market”.