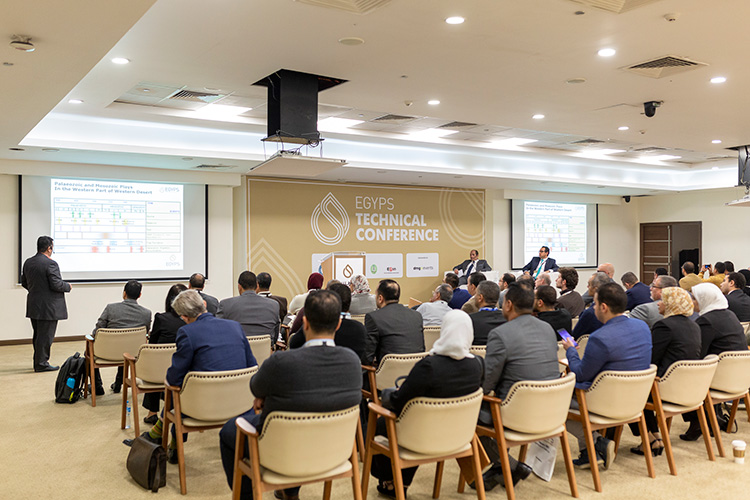 The fourth edition of the EGYPS 2020 was a chance for oil and gas industry leaders to cast the light over the challenges and prospects of the industry.

A technical session entitled “Mitigating risks and improving asset integrity” that took place in the second day of the conference included three presentations.

Yusuf began his presentation with an introduction about the importance of Operational Excellence (OE) to the oil and gas industry.

Yusuf said that “{we have} only limited focus on human performance” which is a main element of OE, although it is the reason behind most of the disasters and risks.

Yusuf searched for solutions through adopting an approach addressing organizational factors, job-site conditions, individual behavior and results. He also implemented risk management techniques. He found that human actions were the cause of error in most cases.

He concluded his presentation introducing some initiative he adopted for reducing errors for instrumentation system which emphasizes that carrying out improvements need to necessarily involve large funds, willingness and leadership qualities to help.

“If you have a contingency strategy for pipelines, you can do and you can minimize the many of time that you will expose to the fire of pipelines”, Woodward explained.

Additionally, he added that mechanical connector can create pipeline connections equivalent to a good weld.

Mahmoud Hegazy, the Head of Operations at Kuwait Energy, Egypt concluded the session with a presentation on “Mitigating Risks”. He introduced his idea about “operation management system (OMS) as integral part of asset management”.

Hegazy explained OMS as “inhouse customized software which helps Egypt operations in many ways to overcome business, challenges, data management {and} enhance workflow efficiency, save time and save cost”.

Hegazy added that OMS has second phase which presents dashboarding upgrade, calculate direct and indirect well costs, performance board, project management and it performs as analysis platform for material consumption and performance.

In another session, entitled Unlocking Potential of Mature Basins, a group of four presenters discussed how to unlock potential of mature basins in Egypt. They have shared the studies conducted on some fields to increase their production.

According to Osman, the factors affecting LRLC reservoirs are: bed thickness, grain size, mineralogy, clay distribution and water salinity. He talked especially of Dorra field, where the first examination did not show any hydrocarbon or sandstone. He confirmed that the new interpretation and reservoir stimulation jobs have shown different results.

He analyzed the new workflow implemented to increase production. Its stages are: revising old data and reports, geo-seismic interpretation, formation evaluation and integrated work and 3D model. The results of this work flow were meeting the challenges he set in the beginning of his presentation.

Three unites with four bounding surfaces were discovered in Ras Budran. The study showed that Matulla has good sand reservoir quality at the lower unit. In addition, lower Matulla has average proved additional production of 500 BOPD. He concluded by stating that this workflow can be applicable in similar brown fields.

Islam Zewain, Senior Reservoir Engineer, Gulf of Suez Petroleum Co. (GUPCO), presented a software that assists decision making. He explained that the economic evaluation team at GUPCO is concerned about examining new opportunities. He explained that “the privileges of this software are it is homemade; it gives instantaneous calculation and it respects all production sharing parameters.” He clarified the steps of using the software. It starts with general input of data, then production profile and oil prices.

The software is designed to evaluate the success or failure of a certain project or contract based on this input.

The last day of EGYPS 2020 was also a very busy day for technical experts. The first session in the last day discussed “Occupational Health and Safety.

Kareem Rasmy Kamel, the Principal Safety and Loss Prevention Engineer at ENPPI Egypt started the flow of presentations with a discussion of “Risk based approach in design hazard management”.

Kamel elaborated through case studies that the early integration of hazard identification and risk assessment methods in the design process “eliminates or minimizes the risks of injury throughout the life of the product being designed”.

Woolghan presented the efforts of his company to provide skills training programs.

He discussed sustainability from Bechtel’s point of view saying that “we improve the quality of life in communities where we work by respecting local cultures, engaging local people, and protecting the environment”.

The last presentation of the session was provided by Aimen Badawy, Environmental Manager at BP, under the title “Keeping Mediterranean Skies Clean”. Badawy noted that “BP’s goal is minimizing the carbon footprints of its operation”.

“Environment and Sustainability” was the topic of the second session of the third day. The session started with a presentation entitled “Flare Management Reduction Schemes”, introduced by Tamer Aieysh, HSE General Manager at Rashid Petroleum Company (Rashpetco).

Aieysh showed the flare problem especially in his company. He introduced Rashpetco initiative to minimize flared gas to ALARP to minimize environmental footprint.

The second presentation was introduced by Margret Khaloian, a graduate student from Kyushu University of Japan under the title of “Unveiling the Mechanisms of Sodium carbonated Gel formation and Potential for CO2 Sequestration for Shallow Formations”.

Section Head in Occupational Health and Safety at Egyptian Natural Holding Company (EGAS), Mohamed Adel Moustafa Abd-Elaziz gave a presentation about “Synthesis of Recyclable Carbon/lignin bio-composite Sorbent for in-situ uptake of BTX Contaminants from Wastewater”.He talked about the water pollution and how to get benefits from the wastewater especially BTX.

Shoman saw that “recyclers must work very closely with actors at all stages of value chain to throw off the technical, psychological and economic shackles hindering greater substitution of recycled plastic for raw plastic”.

Another session in the last day of the technical conference had four presenters tackling integrated stimulation approaches to develop unconventional wells.

The first presenter was Ahmed Samy Ragheb, Reservoir Engineering Section Head at Esh El Malaha Petroleum Company (ESHPETCO), Egypt. His presentation was about using stimulation and hydraulic fracturing treatment to develop Thebes reservoir. He mentioned that before this case study, Thebes was not considered as a reservoir and it was not an interesting formation. So, the challenges the team met can be summarized in two points “first, is to introduce Thebes as a new reservoir, second, how to produce from such a tight reservoir with optimum cost,” he clarified.

He explained that the team collected all the available data before stimulation and decided to use hydraulic fracture treatment with modifications.

Amr Abdelbaky, Technical Advisor at Halliburton gave a presentation about the execution of an integrated fracture approach in Bahrah well, Mauddud formation in Kuwait.

“To increase the contact between the reservoir and the wells, they need to drill horizontal wells and do multi-stage fracture,” he clarified. He explained that by using this fracture execution strategy, the team had completed three drilling campaigns from 2015. As a result, “the team was able to get economical production from a zone which has been left behind since 1936,” he concluded.

Mohamed Aboelenin, Petroleum Engineer at GUPCO, gave a presentation about the execution of smart e-coil for the first time in Egypt. He started his presentation saying that “I will present a multi-discipline project that succeeded to add 2000 b/d from a mature field. He explained that the field is GS327 that produces from Kareem and Asl sandstone reservoirs. He pointed out that producing from this platform was a challenge because it has heavy oil and a sour environment.

He clarified that “the team studied most of the deployment methods that we have in the market and they ended up with choosing smart e-coil” to access the platform. He explained that smart e-coil is used to deploy logging tools with the surface read out and also for conventional operations like cleaning out and milling.

The last presentation was given by Bhargava Ram Gundemoni, Global Business platform E&P at 3M, Germany. It was about using, enhancing and applying ceramic sand screen in Malaysia. He explained that “in Malaysia, the formation sand production is one of the major production challenges in most of the mature fields.” He illustrated that ceramic screen were applied in those fields to ensure sand free production. However, after the installation, 7 wells were diagnosed with ceramic screen failure post 6 months to 15 months of the actual production, as he mentioned.

He demonstrated the steps taken to analyze the problem. Tear down investigation and Computational fluid dynamics (CFD) analysis were executed to develop the ceramic screens as he clarified. As a result, “the team did some modification on the design of the end cap section and has implemented some design changes which were later re-evaluated by CFD analysis,” he added.

He mentioned that the new modified ceramic screen was applied in S field, well G in Malaysia which had sand production. He explained that “ceramic screen was the best solution on this kind of well,” because ceramic sand screens made with sintered silicon carbide offer much higher erosional resistance at speed of 300 ft/s sand impingement velocity.

He concluded by listing the results of using ceramic screens. He stated that the ceramic screen allowed the well potential to be fully unlocked. “The well is producing at 100% chock and did not produce any sand at surface,” he added.

In another session, four presenters had discussed latest technologies applied in Egypt and abroad in offshore and subsea operations.

The first presentation was about how to prepare pipelines for intervention and to safely re-root them. The presentation was given by Ahmed Farahat, Project Manager at Global Projects Organization, BP, Egypt.

He mentioned that “intervention of pipelines is a necessity,” because there are various damage mechanisms for pipelines such as loss of internal wall thickness. In addition, he explained that having a repair plan would improve overall reliability of the pipeline system and help reroute pipelines form old to new fields.

He gave an example with the intervention process of Valhall offshore field in Norway. He went through the whole processes of the project that included cleaning the pipelines, hydrocarbon de-isolation, soil dredging, concrete removal and installation of driverless mechanical connectors.

He added that “the Egyptian offshore oil and gas pipelines network is really complex and is very large. The ministry needs to think of a contagious plan for the Mediterranean pipelines as well as the Red Sea.”

He discussed the advantages of using a MOPU as it facilitates wells intervention and make it easy to move between locations.

Sylvanie Sieng, Africa Field Development Lead Engineer at Subsea7, gave a presentation about developing long subsea tie-back in a sustainable manner with energy harvesting. She stated that “oil and gas companies are pushing forward technology to produce oil and gas at a lower cost.” She mentioned that using renewable energy sources which are available in offshore platforms can provide the power needed at a lower cost.

She clarified the company is working on two power providers for the different kind of subsea equipment that need different power ranges. She said that “the first one is the wave energy convertor and the second one is the offshore wind that can provide all the electricity to the most consuming subsea equipment.”

The final presentation of the session was given by Mohamed Maher, SPS lead Engineer at Enppi. His presentation was about optimizing the cost of subsea Xmas tree. He mentioned that “subsea Xmas tree is a vital and critical equipment of the subsea production system. So, the industry needs to optimize its cost.”