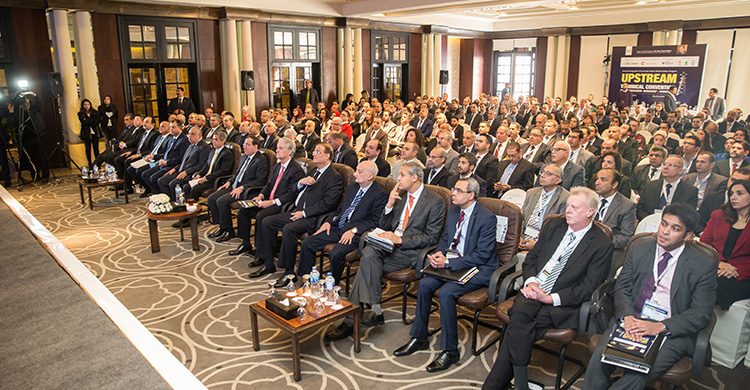 The Upstream Technical Convention offered its attendees a series of specialized workshops, tailored towards method of enhancing the yields of upstream operations. The first workshop addressed matters of “Efficiency in Operations,” beginning with a session focused on the effective use of upgrades, and two more centered on increased production and the optimization of specific operations, respectively.

Osama Halim, Halliburton’s Area Manager for Egypt and Libya, and Mahmoud Shawkat, Director of Sales and Marketing NAF at Baker Hughes, a GE company, chaired the first technical workshop, which aimed to bring insights on ways of optimizing activities in oil and gas fields and, hence, increasing production. “Efficiency is the keyword now in the oil industry world, and we all need to focus on how to bring efficiencies to our business,” said Halim in his opening remarks, subsequently introducing Ahmed Adel Fahmy, Senior Reservoir Simulation Engineer at Khalda, for the workshop’s first presentation. Berenice Field Simulation Study

Fahmy opened his presentation with an explanation of the particularities of Berenice reservoir, which lies under a partial water drive and contains black oil. Fahmy divided Berenice wells into two groups. The first group consists of three high structure wells with high productivity index (PI) ranging from 50 up to 100 barrel per pounds per square inch (BBL/PSI), no water production and no oil water contact (OWC). Meanwhile, “the second group is [four] low structure wells. They have relatively low PI ranging from three up to 40 BBL/PSI, as well as water production and clear OWC,” Fahmy explained.

Khalda’s goal is to “… to maximize the value from the field,” Fahmy pointed out, adding, “The only ways to accelerate production are by either upgrading or by drilling new wells – or both.” Crucially, the evaluation showed that in order “… to maximize the field’s production in presence of [the evaluation concerns – including acceleration impact on the oil recovery in light of the field’s excessive water movement, pressure impact on acceleration and the best field development plans –] would have been highly critical for the management without the use of reservoir simulation.”

The Berenice stimulation proved that, “Increasing the production from the crestal locations does not have negative impact on the ultimate recovery and it achieved even water table movement, which resulted in good water/oil displacement.” Fahmy concluded his presentation adding that, “Drilling new wells adds marginal value. Therefore, acceleration from the current wells is sufficient as long as there is no change in the geological structure.” The study’s result collaborates with a valuable angle on how to boost well performance while decreasing costs.

“The normal decline rate for West Bakr is 24% per year, so we have succeeded in maintaining the production. We added 22% more to the production, so we actually achieved around 46% more production this year,” Tolba said. Therefore, part of the field’s development success was “depending on the strategy how to subject the artificial lift that fits the purpose,” he added.

The company started developing the field during the period from 2012 to 2014 through drilling operations, which were followed by optimization work in 2016, Tolba presented. TransGlobe was using sucker rod pumps (SRPs) in placing more than 90% of the wells in the field’s re-development phase to production. However, the company “…concluded that the SRPs aren’t able to produce from those wells in an efficient way so we have started to make a change from SPRs to PCP [progressive cavity pumps], the percentage of PCP in 2017 reached up to 44% compared to just 10 % in 2011,” Tolba explained.

During the development work, the operating companies “…had only two wells that exceeded the budget by 10% but the seven rest wells saved a lot of money. Specifically in K29 we just spent 42% actual cash and we used the material in-house. We spent 58% from the budget on the materials so we saved more than $300,000 in comparison with the planned budget,” Tolba stated.

In order to both reduce and save annual costs, pig optimization was performed on the Qasr-Salam 24” pipeline and PTAH-UMB pipeline.

Qasr-Salam 24” pipeline has a major problem as there is “…a slug catcher at the end of line. The drainage rate of this slug catcher is around 35,000 barrels per day (b/d),” Mahmoud said. “Typically, [a company] decrease[s] the load on production rate during any pigging period to avoid any process offset on the downstream facility,” he added. However, with pigging optimization the pipeline was able to decrease downtime by over 50%, reduce production decline by 50%, decrease the risk of sudden offset occurring due to liquid level constraint violation and reduce pig stuck risk.

Meanwhile, PTAH-UMB field pipeline 8” was affected by wax, which in-turn affected production. Hence, it was proposed to determine the pigging frequency and velocity in order to solve the issue, or to install two new rented heating stations with a cost of approximately $1 million. Pigging optimization at the pipeline prevented pipeline plugging and decreased mitigation cost to a point where it was lower than prevention cost. “PTAH-UMB optimization eliminated the need for the heating station and saved cost of around $1 million per year,” Mohamed Negm concluded.

At the end of the three presentations the convention welcomed all other attendees to join individual round table discussions, where questions and open exchanges were welcome and where the presenters could elaborate on specifics.

“So far the convention has been amazing, especially the efficiency workshop and its case studies. It helps in transferring experience between companies. Everything presented by a company might relate to a hidden problem in another firm in which the new technologies in the presentation can be used,” said Mostafa El Aswany, General Manager of Regions Evaluation at Qarun Petroleum Company when asked for his comments on the workshops.