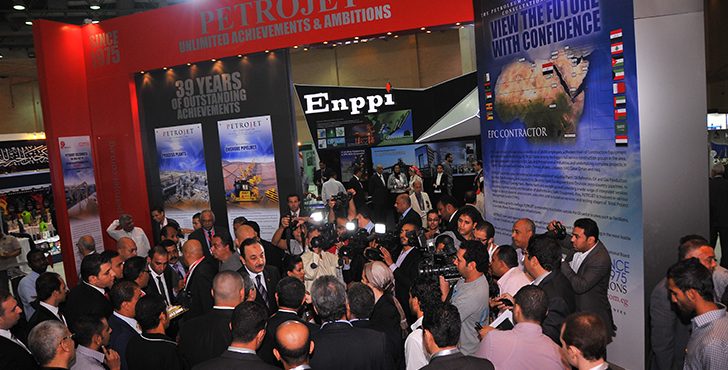 The Cairo Energy Oil and Gas International Conference organized by the Pyramids Group Fair Organization under the patronage of Eng. Sherif Ismail the Minister of Petroleum and the Egyptian General Petroleum Company (EGPC), took place from September 6th through the 9th 2014 at the Cairo International Convention & Exhibition centre (CICC) in Cairo. The event was sponsored by PETROJET- the official sponser, Egyptian Maintenance Co. (EMC), AIDMO, General Electric, EGAS, Ganope, ABB and Scheider.

The conference focused on renewable energy resources in Egypt, as well as methods and plans for its development. The three day conference also covered discussions and workshops on several main topics including:

-”Legislation and incentives to invest in renewable energy,” discussing the process of allocation of land needed for new and renewable energy projects, also the regulatory controls to the entry of the private sector in the projects of renewable energy.

The event included speeches and talks by several noted figures from the petroleum and power private and governmental sectors. It shed a light on the priority that Egypt is giving renewable energy within the upcoming period.

The conference opened with a speech, given by the First Deputy of the Ministry of Petroleum Sherif Soussa, on behalf of Petroleum Minister Eng. Sherif Ismail, in which he highlighted the importance of providing “energy security” and increasing the petroleum production to answer for local demand. It also stressed the importance of exploiting conventional and unconventional energy sources, including renewable energy, in the shadow of the energy crisis the country has been going through. The speech expressed the sector’s interest in Egypt’s shale reserves, explaining that huge reserves –yet to be estimated– have been found in the Red Sea area and the Western desert. Soussa stated that concessions will be tendered soon for shale exploration. Egypt currently relies on petroleum products to produce 91% of its energy, while 9% only is produced from hydraulic and renewables, Soussa said, adding that Egypt’s next step is to seek a variety in its energy sources following other international success models.

The speech was followed by the Electricity Minister Mohamed Shaker’s opening word, given on his behalf by Mohamed Moussa Omran, First Deputy of the Ministry of Electricity and Renewable Energy. It stated that the electricity sector in Egypt, keen on providing its best service, has successfully connected 99% of Egypt to the national grid. The speech added that Egypt is rich in renewable energy resources; therefore, the Ministry of Electricty is adapting a new strategy for the development of these resources. A Solar Combined Cycle plant has been inaugurated in Koraymat producing 140 MW, of which 20 MW are solar, while another renewable project is currently underway in Gabal El-Zeit area to produce wind power with a production capacity of 550 MW.

The speech stated that the government’s current priority is renewable energy sources with investments being channelled toward several wind and solar power projects in the next period. It also stated that the cabinet has approved for 1,000 governmental buildings –25 for each ministry– to run on solar power through panels installed on the buildings’ roofs, after the electricity ministry’s success in installing 40 MW solar panels on its buildings. Soussa also explained that the government is to encourage renewable energy projects by allocating lands to investors, as well as providing the necessary incentives for a profitable investment, adding that tariffs and regulating laws are to be announced shortly.

The first day of the conference also included a session on the government’s vision of a “secure energy mixture” in Egypt led by Prof. Dr. Galal Osman, Head of the Egyptian Wind Energy Association, who said in his word that Egypt should stop fuel burning, [population] should expand beyond the Nile Valley, address carbon emissions, and separate renewable energy from the ministry of electricity. Meanwhile, former Minister of Petroleum Abdullah Ghorab criticized the current government for their plans to import gas explaining that Egypt still has huge gas reserves in the Mediterranean and the Red Sea, which might be more costly to explore but yet cheaper than the international import price.

Eng. Mohamed Shoeib, the former Chairman of EGAS, expressed that energy saving is the best resolution at the moment adding that switching to LED lights alone can save 20%. He also stressed the importance for having legislations for solar water heaters, hopefully replacing all electric water heaters in Egypt with solar operated ones within the next three to five years, with the government making them available to the public via payment plans or installments.

The conference attendees agreed that, if all went according to plan, Egypt can rely on renewables to produce 80% of its energy by 2050 and 20% by 2017.

Renewable energy expert, Ibrahim Zaya,t explained during the conference that solar plants are the fastest to construct, with a timeline of only one year for the installations, and with no running costs for the first seven years, with guaranteed production for 20 years, making it not only an environmentally conscious decision to rely on renewables, but also a cost effective one in the light of the current energy and economic crisis that Egypt is facing.

Khaled Gasser, Chairman of Solar Energy Development Association (SIDA), explained that the expansion in renewable energy projects is dependant on the expansion in its different applications from power generation and water heating to water desalination. On the other hand, Eng. Amr Mohsen from Lotus Energy explained that the sun provides more power in a year than all oil, gas and coal reserves in the world. He added that energy and water are matters of national security and should be treated accordingly. He said Egypt needs to invest in a wind turbine, as it might assist in the water issues with Ethiopia, for the African country has more wind power resources than the its consumption needs. He also stressed the importance of manufacturing renewable energy production essential equipment locally.

The conference was accompanied by an exhibition for 70 oil, gas and energy companies including EGAS, PETROJET, Misr Petroleum Co., General Electric, Enppi, TAQA, Mobil, Caltex, Schneider and many more.

GE is showcasing the competencies of its Distributed Power solutions that draw on non-traditional sources of power generation to deliver power where it is needed most, and thus meet Egypt’s growing demand for electricity at the Cairo Energy Oil & Gas International Conference & Exhibition being held from September 6 to 9, 2014, at Cairo International Convention Center.

Sofiane Ben Tounes, President & CEO, GE, North East Africa, said: “GE recognizes the efforts of the Egyptian government in rationalizing consumption and diversifying energy sources. We would like to express our willingness to invest in projects that can support the government’s efforts. With over 40 years of operation in the country, GE has been a strong growth partner in supporting the country and the people in meeting their energy needs. We work with our partners to deliver efficient and reliable power solutions that address their diverse requirements. At Cairo Energy 2014, we are not only showcasing our technologies that enhance the operational efficiency of power plants but also the newest solutions from our Distributed Power business that helps deliver power where it is needed most, in addition to drawing on renewable sources.”

He added: “With electricity consumption in the country growing at an average of 7 per cent annually, GE is committed to support the expansion of key power plants in the country as well as partner in initiatives that will position the country at the forefront in renewable energy.

“Our Distributed Power solutions enable our partners to generate efficient and reliable power at the point of use, and will be a game changer for the industry. The aeroderivative gas turbines, Jenbacher gas engines and Waukesha gas engines, which can generate power from 100 kW to 100 MW, are ideally suited to tap alternative sources including landfill and other renewable sources.”