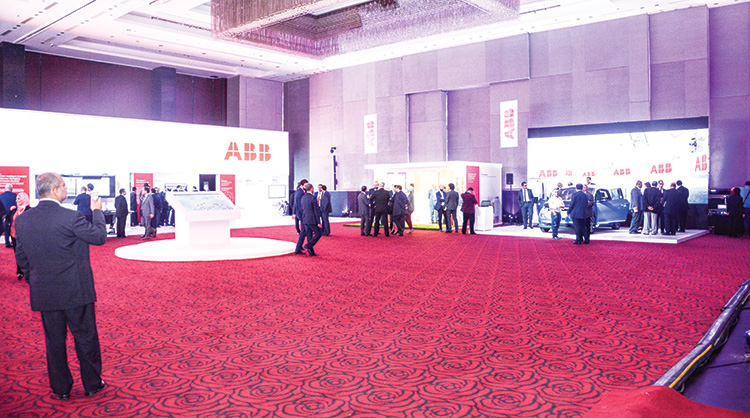 In his speech, on behalf of the Electricity Minister Mohamed Shaker, El Destawy praised ABB’s efforts in supporting the local electricity and renewable industry, which comes hand-in-hand with the ministry’s plans to increase the share of local products used in the energy sector.

Besides YuMi, ABB further displayed its motor censors, which enable users to supervise the motors through the internet. “This small device, if inserted in a motor, can track its performance, which means that the engineer does not have to travel for few kilometers to check the problems of the motors,” Naji Jreijiri, ABB’s Managing Director in North and Central Africa, explained to Egypt Oil & Gas. He emphasized that the censors save time in terms of transportation and prevents haltting motors for a long time.

In addition to ABB’s technology, the Show also brought the Bavarian Auto Group’s BMWi, the first electric car to be introduced in the Egyptian market. The German e-car is expected to be available in less than a year, Mohammad El Ghazaly Harb, BMW Marketing and Product Manager at Bavarian Auto, told Egypt Oil & Gas.

During the event, ABB stressed that the company is working in collaboration with various Egyptian state apparatus in order to install the most updated technologies in the Egyptian process industries. “We are working with the Ministry of Higher Education in some universities, such as Cairo University and Ain Shams University, to upgrade the labs with latest technology of automation system in order to prepare the students for the industry,” Jreijiri stated.

“As for the Ministry of Trade and Industry, it has its own technical schools, so we are also working with them in order to develop the trainers and change the curricular from the old mechanical technology to electronic technology,” he added.

In the same context, ABB has signed a Public Private Partnership Agreement with the Egyptian Ministry of Trade and Industry, along with the Swiss and the Swedish Embassies in Egypt on May 13. As per the agreement, which will be valid for three years, technical training will be provided in collaboration with ABB.

ABB is a technology leader in electrification products, robotics and motion, industrial automation, and power grids, in addition to serving customers in utilities, industry and transport, infrastructure globally.  The company is operating in more than 100 countries around the world and has been present in Egypt since 1920s.