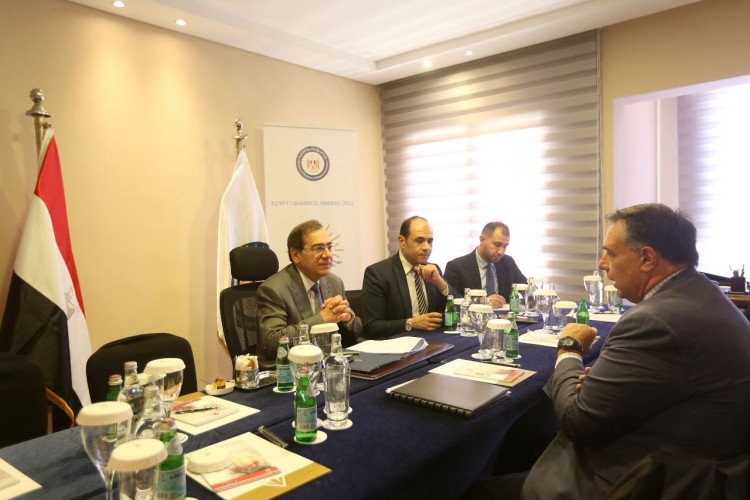 Tarek El Molla, Minister of Petroleum and Mineral Resources held two separate meetings with World Bank officials at COP 27, the first being with Riccardo Puliti, the bank’s Vice President of Infrastructure, and the second with Paul Noumba Um, the bank’s Regional Director of Infrastructure in the Middle East and North Africa.

During the first meeting with Puliti, El Molla stressed the ministry’s keenness to accelerate natural gas deliveries to homes and to increase the beneficiaries of that clean and safe civil service at the same time. He noted that the World Bank had financed the delivery of 2.3 million housing units in the gas home delivery project starting in 2016.

Puliti stressed the importance of the sessions taking place at COP27 in clarifying the energy sector’s initiatives towards reducing emissions from fossil fuels, and the initiative prepared by the East Mediterranean Gas Forum (EMGF) to decarbonize gas. He also praised Egypt’s achievements in the natural gas deliveries project pointing out that it serves its development goals and improves the living conditions of its citizens.

In the second meeting, El-Molla and Noumba Um reviewed areas of the bank’s cooperation with Egypt in the fields of the oil and gas industry, specifically regarding efforts to modernize and develop the sector, cooperation in the infrastructure for gas deliveries, and initiatives to improve energy efficiency. They also discussed future opportunities for cooperation between the petroleum sector and the World Bank.

During the meeting, Noumba Um expressed his happiness to be at COP27 and congratulated Egypt on the success of organizing and hosting the summit. He stated that the World Bank will announce an initiative under the name of Hydrogen for Development, explaining that the bank will provide support for it and invite Egypt to join it.