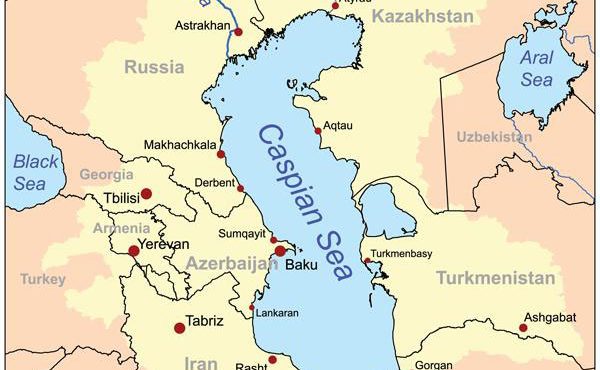 Since the 1991 collapse of the USSR, the Caspian basin has come surging into the global oil and natural gas market. The U.S. government’s Energy Information Administration estimates that the Caspian could contain as much as 250 billion barrels of recoverable oil along with 200 billion barrels of potential reserves, in addition to up to 9.2 trillion cubic meters (tcm) of recoverable natural gas, with conservative estimates valuing its reserves at more than $12 trillion. Needless to say, this attracted Western attention; in 1998 U.S. Vice President Dick Cheney remarked, “I can’t think of a time when we’ve had a region emerge as suddenly to become as strategically significant as the Caspian.”

Despite the lack of a definitive agreement delineating the Caspian’s waters and seabed, all five Caspian nations have been delicately developing their offshore reserves in areas that will undoubtedly remain theirs whatever eventual agreement is hammered out between Azerbaijan, Iran, Kazakhstan, Russia and Turkmenistan.

The question remains of how to get Caspian hydrocarbons to market. While Iran and Russia have access to the sea, Kazakhstan, Turkmenistan and Azerbaijan are landlocked. Kazakhstan and Azerbaijan currently rely on two major pipelines – the Caspian Pipeline Corp. line from Tengiz to Novorossiisk and the Baku-Tbilisi-Ceyhan (BTC) to export their oil.

In the last 24 years, an additional export option has been developed – tankers. Now all five Caspian nations have mini fleets of tankers plying the world’s largest enclosed inland body of water, as regional trade continues to increase.

While both Russia and Iran maintain tankers on the Caspian, their fleets are relatively insignificant, as they move the bulk of their energy exports via pipelines to the Black Sea and Persian Gulf, respectively, for onward tanker transport. Most notable is the steady rise of shipping in the newly rich petro-states Azerbaijan and Kazakhstan, while even Turkmenistan has begun to charter and build vessels for Caspian hydrocarbon transport.

The tankers are not the massive AFRAMAX behemoths so decried by environmentalists – given the shallowness of much of the Caspian, two of the largest ACSC tankers are two Tanker project 19619 13,000-ton vessels, the Koroglu and Dede Qorqud, constructed for the ACSC at Russia‘s Krasnoe Sormovo shipyard in Nizhny Novgorod on the lower Volga. The advantage of the 19619 class is that it can use existing port facilities with any modification.

Kazakhstan also began to transport some of its oil exports by tanker. Beginning in October 2008, Cross Caspian Oil and Gas Logistics LLC started transportation of crude oil produced from Kazakhstan’s onshore Tengiz field across the Caspian to Azerbaijan. Tengiz is operated by Tengizchevroil, a consortium including Chevron, ExxonMobil, KazMunayGaz and Lukarco JV.

Cross Caspian Oil and Gas Logistics LLC contracts both ACSC and Kazakhstan’s Kazmortransflot to transport Tengizchevroil’s crude across the Caspian to Baku’s Sangachal terminal, from where it is delivered either to the BTC system through the interconnection pipeline facilities and/or by rail to the Georgia’s Black Sea Kulevi oil ports.

If Azerbaijan was the first post-Soviet republic out of the starting gate in expanding its tanker operations, a decade ago Kazakhstan, which used to lease ACSC, Russian and Iranian vessels, began to divert some of its oil wealth to constructing its own tankers.

In 1998 the Kazakh government created the Kazmortransflot joint stock company to develop a national merchant marine fleet and expand into the international shipping of domestic freights. Four years later Kazmortransflot and Mobilex signed a contract, largely underwritten by the European Bank for Reconstruction and Development (EBRD), with Nizhny Novgorod’s Vympel Ship-Design Company for the construction of three Caspian tankers.

In August 2005 Kazmortransflot’s first tanker, the $18.75 million Astana, designed by Vympel and built at Russia’s Vyborg Shipyard in Leningrad Oblast, began sea trials. After a month-long transit of Russian inland waterways and the Volga-Don canal, the vessel arrived in the Caspian and on May 25, 2005 Kazakh President Nursultan Nazabayev visited the Astana in Aktau and told reporters that besides the two sister ships under construction, Kazakhstan intended to build a 60,000-ton tanker. Construction of tankers for Kazakhstan has proved a boon to Vympel and now provides about 30 percent of the bureau’s revenue.

The Astana sails on the Aktau-Baku and Aktau-Makhachkala routes, carrying oil from Kazakhstan’s Tengiz and Buzachi fields, making 7-8 voyages per month, hauling a million tons of oil annually. Since its launch, the Astana has been joined by sister ships Aktay, Abaj, Kazakhstan and Almaty.

Kazmortransflot has plans for expanding beyond is Caspian base, aiming to gain business in the Black Sea and open seas through the acquisition and construction of a new series of ships. Kazmortransflot deputy general director Mikhail Ialbachev remarked, “We aim to enhance our transportation connections by building two ferry boats to carry cargo from Kazakhstan to Azerbaijan and on to areas such as Russia and Turkmenistan; a plan to participate in building a ferry port in support of this is currently being assessed… The Caspian Sea is like a huge lake; it is a closed sea. We want to be not only on the Caspian Sea market, but the world market. We have tankers that have the potential to carry fuel oil from the Baltic, to Russia, to Europe and the Mediterranean; for now we are looking at the Black Sea because we already have two ports there from where Kazakhstan oil has been exported.”

Even Turkmenistan, long the isolated maverick of Caspian producers, which long rented ACSC tankers, has begun to transport its oil by sea. In 2001 Ireland’s Burren Energy Shipping and Transportation, operator of the Nebit Dag Production Sharing Agreement in Turkmenistan signed construction contracts for ten tankers for its Samara subsidiary, some of which were to be used in Turkmenistan. Burren previously chartered Russian Volgotanker tankers for Turkmen oil exports. The same year Turkmenistan received its first 5,000-ton tanker, built in Turkey, but President Saparmurat “Turkmenbashi” Niyazov proved reluctant to make substantial investments in Turkmen-owned vessels for transiting oil through its Caspian ports of Turkmenbashi, Alaja and Ekerem.

Since Niyzaov’s death Turkmenistan has been active in building its own tanker fleet, purchasing vessels from Russia and the Baltic states to deliver freight along the Caspian coast and crude oil from the Turkmen terminals of Aladzha and Ekerem to the oil terminal of Kenar. In January 2013 Turkmenistan announced plans to establish a shipyard on its Caspian shoreline.

In the absence of a definitive Caspian treaty, the mini merchant marines there will only grow as trade patterns in the Caspian basin continue to diversify.