South Africa to Study Construction of GTL Plant in Iran 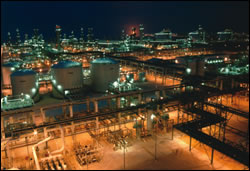 Iran and South Africa agreed on starting a feasibility study to establish a gas to liquids (GTL) conversion plant in Iran with a capacity of 50,000b after South Africa’s Energy Minister, Tina Joemat-Pettersson, visited Tehran for energy talks, reported Oil Price News.

This came as Managing Director of Iran’s National Petrochemical Company (NPC), Marzieh Shah-Daei, met and talked with the visiting South African Minister in Tehran on the 5th of March, reported MEHR News Agency.

The two sides emphasized on the need to finalize negotiations in the shortest possible time.

Shah-Daei stated that: “Research Institute of Petroleum Industry and a South African company had previously reached agreements to build a GTL complex in Iran.” She added: “study phase of the project had been launched while it was agreed today that talks be finalized for draft of the contract to be written.”

The construction of the GTL unit will be finalized once careful economic and technical analyses are carried out.